ContinueLearn More X
Home » News » Robotics in surgery: Five devices and how they assist in the operating room

Robotics in surgery is a growing trend that doesn't appear to be slowing down, with the market set to increase exponentially in the next six years 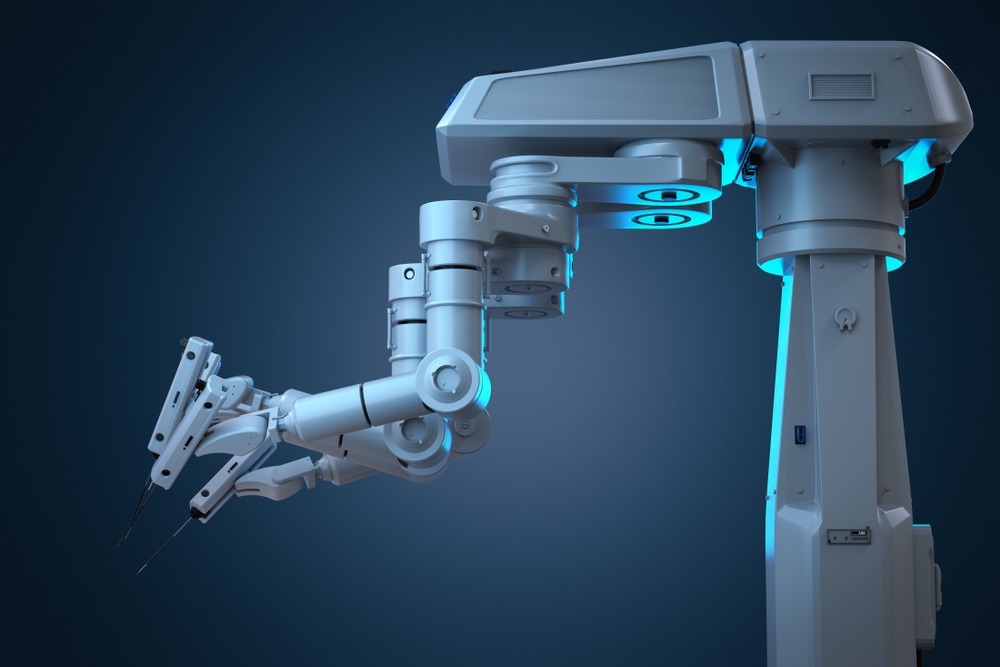 Robots are expected to form an integral part of the surgical team in the near future (Credit: Shutterstock/Phonlamai Photo)

While we’re still a long way from achieving a fully AI-controlled surgical procedure, the use of robotics to assist in surgery is a hospital trend expected only to increase in prevalence over time.

The first robotic-assisted procedure, a stereotactic brain biopsy, was carried out by the Puma 560 from pioneering robotics firm Unimation.

Stereotactic biopsies use CT or MRI imaging techniques alongside algorithms to isolate tumours or lesions in the brain and plan the insertion of a needle to take samples – something done much easier without the natural wavering of the human hand.

It’s this enhanced precision that led to the early validation of robotics in surgery and drove further innovations to apply the technology in other areas of the body.

According to revenue forecasting firm Research and Markets, the global surgical robots market, which it valued at $6.9m in 2020, will grow and reach $14.8bn by 2027.

Here, we look at five of the more modern machines and the companies behind them hoping to drive this growth.

Intuitive Surgical’s line of da Vinci robotic products is aptly named, as the company is credited with a paradigm shift in surgical robotics much like the robot’s namesake Leonardo da Vinci is for several aspects of inventing, such as man-made flight.

According to the journal Nature, in 2003, less than 1% of surgeons in the US performed a robotics-assisted radical prostatectomy (RARP) in preference to open or laparoscopic surgery – but by 2014 RARP accounted for 90% of radical prostatectomies across the country.

The surgical indications for da Vinci are minimally invasive surgeries, mainly localised to the abdomen and pelvic regions, such as prostate removal, hysterectomies, thyroid cancer removal and gastric bypass.

The core value lies in achieving greater precision and minimising the risk of surgical errors due to physical and mental fatigue through stabilising instruments using robotic arms controlled by a surgeon sitting at a nearby console equipped with a screen.

But that value comes at a high cost, with the da Vinci Xi, Intuitive’s premium model, coming in at $2m per unit – a cost that increases further with the necessity of replacing disposable parts.

British company CMR Surgical is one of several seeking to capture some of the market share of those eager to adopt robotics in their surgical rooms, but put off by the cost.

The firm doesn’t disclose the price of its system, which performs the same functions as da Vinci with multiple arms that can be subtracted and added to theatre as needed.

The differentiating factors are that Versius is smaller than da Vinci, and CMR Surgical claims it is more flexible and versatile than existing robots, which it says will allow the system to perform a wider range of operations.

Investors clearly have faith in its strategy as it hit unicorn status back in September 2019 with a valuation that still stands at $1bn.

Another company looking to topple intuitive from its position as market leader is Asensus Surgical with its own Senhance system.

Like many, the company sees an opportunity to democratise the use of robotics in laparoscopic procedures by providing hospitals with a more affordable option.

But in an effort to differentiate itself further from the competition, Asensus has added a machine-learning component to its process.

The Intelligent Surgical Unit that accompanies its robot arms, which carry the same capabilities as da Vinci, learns from each procedure and uses a predictive algorithm to help guide surgeons with visual cues based on the best-practice data acquired.

Prior to this, the robot still marketed as Mako had been validated in minimally-invasive joint replacement procedures, such as total knee and hip arthroplasty.

Co-founder Rony Abovitz was part of the firm’s predecessor Z-KAT, which developed its initial haptic robotic arm technology, known as the Whole Arm Manipulator (or WAM Arm) in coordination with MIT (Massachusetts Institute of Technology) and then robotics specialist Barrett Technology.

The company has reportedly said that the haptic feedback used by robots like Mako could be annoying for surgeons and limit their ability to perform full bone cuts, and so opted not to include the technology in their own robot.

Rosa comes in several varieties: The Rosa One Knee System, the product made to rival Mako, as well as the Rosa One Spine System and Rosa One Brain System – a product made for stereotactic brain surgery like the old Puma 560, but with more advanced planning software.

CORD Files for Premarket Approval with the U.S. Food and Drug Administration for the SC9 Intraocular Lens for Cataract Surgery