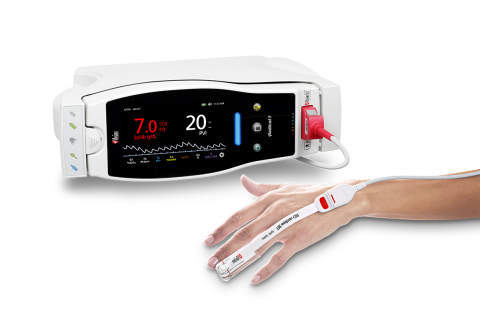 The primary points of comparison were the amount of crystalloids administered and blood lactate and serum creatinine levels during the intraoperative period.

In the study, Dr. Cesur and colleagues, noting the importance of intraoperative fluid management in terms of postoperative organ perfusion and complications, sought to compare the effects of CFM (guided by clinical assessment and heart rate, arterial blood pressure, and invasively measured central venous pressure) with GDFM (guided by clinical assessment and noninvasive Masimo PVi monitoring).

They enrolled 70 ASA I-II adult patients undergoing elective colorectal tumor surgery, who were divided randomly into CFM and GDFM groups. PVi was measured using a Masimo Radical-7® Pulse CO-Oximeter® with software version 7.0.3.3 and SET® sensors. In the CFM group, an NaCl solution was administered at the rate of 4-8 ml/kg/h; when mean arterial pressure (MAP) fell below 65 mmHg or 30% baseline MAP, the speed of infusion was increased, colloid was initiated, and ephedrine was administered.

In the GDFM group, the same solution was administered at the rate of 2 ml/kg/h; if PVi rose above 13% for more than 5 minutes, colloid and then ephedrine were administered. Treatments in both groups were continued until values were restored to each protocol’s pre-treatment threshold.

Durations of anesthesia and of surgery, as well as the amounts of intraoperative bleeding and administered colloid, were similar. The length of hospital stay was also found to be similar between the two groups.

The researchers noted that a limitation of the study was that they chose the number of subjects based on the needs of their primary objective, the comparison of intraoperative fluid volume between the two protocols, so they may not have evaluated enough subjects to effectively compare secondary outcomes such as length of stay: “We determined the primary goal of this study as the amount of intraoperative fluid volume and established 35 patients were needed for each group; if postoperative complications, the length of hospital stay[, were] determined as the primary goal, perhaps our numbers [in] each group [w]ould be different

Masimo is a global leader in innovative noninvasive monitoring technologies. Our mission is to improve patient outcomes and reduce the cost of care. In 1995, the company debuted Masimo SET® Measure-through Motion and Low Perfusion™ pulse oximetry, which has been shown in multiple studies to significantly reduce false alarms and accurately monitor for true alarms.