CurveBeam has secured 510(k) clearance from the US Food and Drug Administration (FDA) for its LineUP multi-extremity weight bearing computed tomography (CT) system. 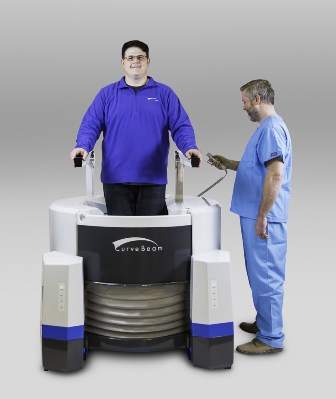 The new CT system has been developed to allow radiologists and orthopedic specialists to visualize three-dimensional bone detail of the lower extremities when the patient is in standing position, helping to study the anatomy in the weight bearing or load bearing position.

CurveBeam’s new system can be used to carry out bilateral scans of entire legs ranging from below the heel to above the knee.

Accessories of the system will also allow to scan hand, wrist and elbow, said the company.

CurveBeam president and CEO Arun Singh said: “CurveBeam continues to elevate the standard of care for orthopedic extremity imaging, and introduction of the LineUP device is another solid step upwards.

“The LineUP is best-in-class for field of view dimensions and image quality. Coupled with CurveBeam’s exemplary customer support & service, the LineUP is poised to revolutionize orthopedic care.”

The LineUP system, which can be plugged into a standard wall outlet, has minimal shielding requirements. It also enables to deliver less radiation dose compared to conventional CT scan.

As per Dr Neil Segal, traditional CT and MR images are captured in a non-weight bearing position, which may not clearly diagnose meniscal damage.

Segal said: “Difficulty in reproducing the same view of the joint over time impairs ability to detect joint disease, and the 2D nature of radiographs makes these images of overlapping bony anatomy very insensitive for detecting abnormalities until there is advanced joint damage.”

In 2012, the company launched the pedCAT system, which allows to carry out weight bearing scans of the feet and ankles.

In 2017, CurveBeam has also secured the FDA approval for InReach system to be used for scanning of hand, wrist and elbow. It is used by specialists for scaphoid fracture diagnosis or distal radius fracture diagnosis at the point-of-care.