The MHRA says it has received reports of the Emerade auto-injector pen failing to activate, meaning children may not receive an adrenaline shot 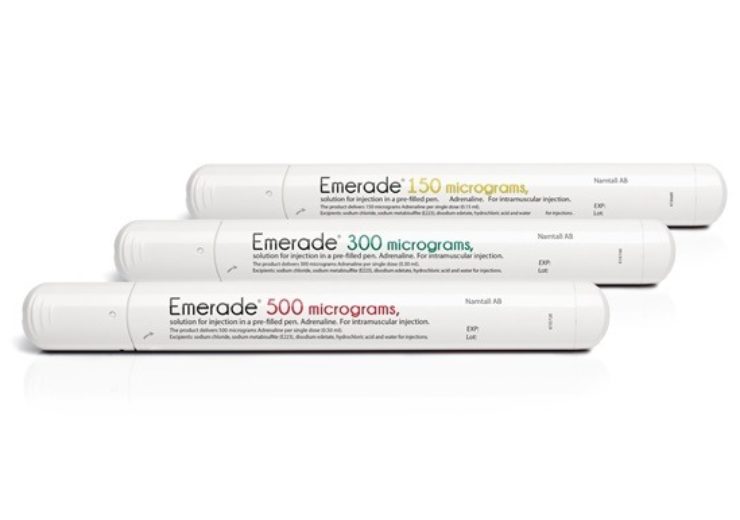 There are three Emerade auto-injector pens containing adrenaline doses of 150, 300 and 500 micrograms - the 150 version has been recalled (Credit: Emerade)

Reports of a malfunction that could stop children with allergies receiving a life-saving adrenaline shot have seen all in-date copies of an Emerade auto-injector pen being recalled.

The Medicines and Healthcare products Regulatory Agency (MHRA) has advised all patients and carers of patients who carry Emerade 150 microgram auto-injector pens to return them to their local pharmacy.

The recall action came today (4 March) after Bausch & Lomb UK — the London-based healthcare firm that sells the device — said it had received reports of people having difficulty activating the pens.

In these instances, a dose of adrenaline — used to treat a severe, acute allergic reaction (anaphylaxis) — can’t be delivered into a patient’s body.

The MHRA said pens should only be returned once patients have obtained a prescription for, or been supplied with, an alternative brand of auto-injector, such as EpiPen or Jext.

The malfunction also affects the 300 and 500 microgram strengths of Emerade adrenaline pens — which the MHRA said will be recalled when sufficient supplies of alternative brands are more widely available.

Until then, patients have been told to continue carrying these pens, as available data from Bausch & Lomb UK “shows the majority of the pens will still activate”.

Patients with diagnosed allergies are advised by the NHS to carry two adrenaline pens at all times.

In the event of a severe allergic reaction, Emerade pens — much like other auto-injector devices — are pressed firmly against the patient’s thigh.

If the pen activates as it should, this releases a shot of adrenaline into the body to help manage the symptoms of anaphylaxis. If it fails, patients have been advised by the MHRA to use their second pen immediately.

The MHRA also reported that exposure to high temperatures may increase the risk of pen failure.

Because of this, Emerade pens should not be stored at temperatures above 25°C, or placed near a radiator or fire. The MHRA advised patients travelling to hot climates to visit their doctor and obtain a prescription for an alternative brand of adrenaline pen.

In November 2019, PharmaSwiss — a Czechia-based affiliate of Bausch & Lomb UK — told pharmacies and healthcare professionals to return all unexpired batches of every Emerade adrenaline pen. This included the 150, 300 and 500 microgram auto-injectors.

This was due to a similar problem in which patients reported all three types may not activate, and therefore fail to deliver adrenaline.

However, while pharmacies were told to stop selling these products immediately and quarantine all remaining stock until it could be returned to suppliers, Emerade pens held by patients were not recalled on this occasion.