How medical professionals are using augmented reality in healthcare 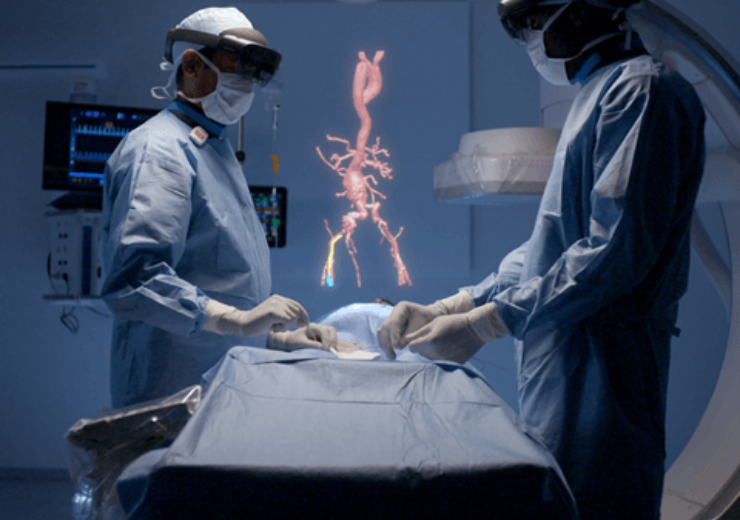 It is hoped this will improve patient outcomes as well as reduce costs.

The project was announced last month at Mobile World Congress Barcelona, one of the largest mobile events in the world.

“That means I don’t need to open you up. I do it through an incision about the size of a pencil point, and we use the X-ray to guide it. I can no longer see inside your body directly, we’re doing it indirectly now.”

How will augmented reality be used in surgeries?

Augmented reality lets doctors navigate tiny instruments through the patient’s arteries or into the organs to treat diseases by looking at a three-dimensional personalised data screen in their field of view, without opening the body up.

Dr Gupta said: “The reason why we like to do these types of procedures is because it is a lot less invasive and also a cheaper procedure with less complications, and the recovery is far easier.”

With just a minuscule incision, doctors can open up arteries in the heart, replace valves in the aorta, fix aneurysms in the abdomen, and stop casualties from bleeding to death due to injuries to the liver and many more.

He added: “If you’re having a stroke, I can take that clot off your brain and reverse the stroke, if you have poor circulation to your foot, I can restore that circulation with a stent.

“If you have a tumour in your liver, I can kill that tumour. All this can be done once I do an incision the size of a pencil point, so this is a little hint of why image-guided therapy is so meaningful – and at Philips, we’re the leaders in image-guided therapy.”

During surgery procedures, a lot of doctors and nurses are present in the room carrying out different parts of the operation while looking at different displays of data on 2D screens, which results in data overload.

Augmented reality with HoloLens 2 will help healthcare professionals look at the three dimensional anatomy information and aid in navigating the devices through the body.

Dr Gupta explained: “The best analogy would be when driving a car, you want to keep your hands on the steering wheel and eyes on the road.

“You don’t want to get distracted having to take your eyes off the screen or take your hands off the steering wheel to press a button to control your car.

“That’s exactly what I want to do when I do these procedures. I want to keep my hands on my instruments, and my eyes on the patient.

“And HoloLens 2 and AR coupled with Azurion lets me do just that, because I can give my commands with voice recognition.”

The system consists of an eye tracker and can therefore match images using eye movements as well as hand gestures to press virtual buttons.

What part of the operation is the HoloLens 2 used for?

Retailing at $3,500 (£2,650) the HoloLens 2 provides a wider field of view and easier controls than the previous version.

It features new components like eye-tracking sensors and an entirely different display system.

A Microsoft spokesperson said: “Philips Healthcare is one of the top healthcare providers in the world.

“It has have integrated HoloLens into the Azurion Image Guided Therapy system to streamline its solution.

“This eliminates physical screens and enables the doctor and support staff to engage more directly with patients and patient data.

“Philips will be taking HoloLens 2 into clinical trials in the coming year.”

What’s the next step for augmented reality in healthcare?

Dr Gupta is expecting to see industries shrink down the devices to become much more light weight and play a huge role throughout healthcare beyond image guided therapy in areas like radiology reading rooms and telemedicine.

He said: “Image-guided therapy and Azurion is a natural first step. I think in the next few years were going to see AR extend to other areas in health, so keep your eyes open in the next two years because it’ll be a very exciting two years.”

Since the announcement at the Microsoft event last month, Philips has been receiving requests from around the world including Australia, Japan, the UK and North America.

As it is in such demand, a factor the company is exploring is “tele-presence,” which will enable surgeons from different parts of the world to collaborate through augmented reality.

Dr Gupta added: “The beauty of AR is it’s not going to be focused in only one country, people all around the world are using it.

“In fact, they’re thinking about using to extend care around the earth, so you can think of scenarios where somebody in the UK is collaborating with someone in China via AR to help with the procedure.

“We call it tele-presence in the interventional operating room.”