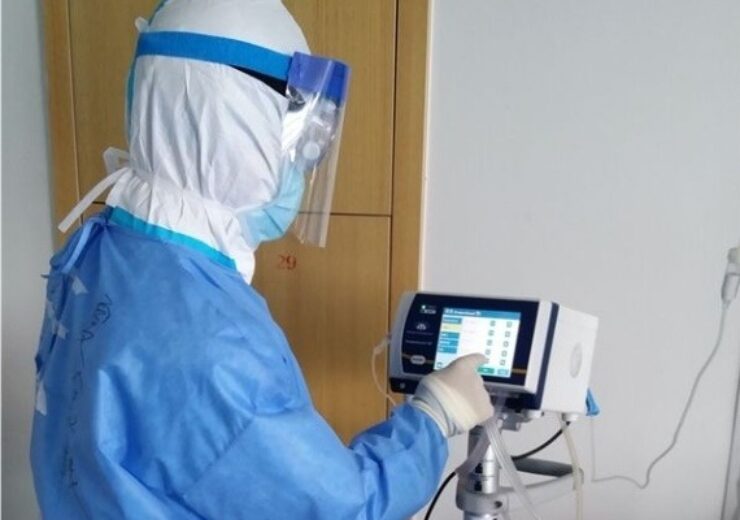 The AnapnoGuard system operates alongside a ventilator, and can be placed near the patient's bed on a cart or mounted on a wall (Credit: Hospitech Respiration)

Mechanical ventilator machines have proved to be a vital tool in supporting millions of severely ill Covid-19 patients throughout much of 2020 – but what happens when these critical medical devices encounter complications that endanger the lives of the patients they are being used to treat?

The former can be treated with antibiotics, but also makes it harder for doctors to remedy the patient’s original respiratory illness, while the latter can lead to a collapsed lung, pulmonary oedema, or hypoxemia – meaning there is too little oxygen in the blood.

All of these complications can make it more challenging to treat a patient who is likely to already be in a serious condition, and this problem is only compounded by the current strain on healthcare services all over the world during the coronavirus pandemic.

However, Israeli medical device manufacturer Hospitech Respiration has developed an automated system that can prevent both of these potentially life-threatening occurrences.

And, while there are other firms making their own airway management systems, Hospitech Respiration CEO Yoav Venkert claims his company’s AnapnoGuard system is the only device in the world that provides both functions simultaneously in closed-loop control.

Throughout the Covid-19 crisis, the Tel Aviv-based start-up has seen its device used to successfully treat about 1,000 patients – after making it freely-available to hospitals in the US, China and Israel.

“The outbreak of Covid-19 has highlighted the need for hospitals to find new and innovative solutions to medical challenges they are facing,” says Venkert.

“Right at the onset of the outbreak, we responded to a spike in demand for airway management solutions in ICUs and Covid-19 care wards by offering our devices pro bono to help medical teams treat ventilated coronavirus patients in Israel.

“While the virus’ outbreak created a massive surge in demand for ventilators, which is expected to increase the ventilator market by 400% in 2020 compared to 2019, the number of pulmonary and airway complications associated with the use of ventilators is expected to negatively affect this market growth.

“The AnapnoGuard system provides the best solution to address these complications.”

How does the AnapnoGuard system work?

The AnapnoGuard system is compatible with all types of ventilator machines, and has been approved by the US FDA (Food and Drug Administration) and China’s NMPA (National Medical Products Administration) – as well as receiving a CE mark for use in Europe.

While a ventilator connects to the main endotracheal tube (ETT) to deliver air into the lungs, the AnapnoGuard works alongside it, and is connected to other airway tubes like the cuff inflation line and suction line.

The first of its two key functions is sealing the patient’s trachea with minimal pressure to avoid mechanical damage to the tracheal tissue during ventilation, ultimately reducing the likelihood of VALIs.

Venkert says the AnapnoGuard is unique in the fact that it continuously monitors for air leaking out of the ventilator tubing and automatically adjusts pressure levels to prevent these leaks, sealing the trachea with the lowest level of pressure necessary.

Other similar devices are unable to monitor for leaks, and can only maintain the pressure at a target level set by clinicians in advance.

Its other main function – removing bacteria-contaminated subglottic secretions from the ETT inside the patient’s airways – prevents these secretions from reaching the primary bronchi and lungs, which can cause infection.

The AnapnoGuard removes these secretions by rinsing and diluting them via one airway line, while simultaneously performing suction from two separate lines to evacuate them from the airways.

As well as being the only device in the world to reduce ventilator complications by performing these two automated functions at the same time, according to Venkert, it can also decrease the exposure of clinicians to possible contamination – including the SARS-CoV-2 virus – in the process.

Where has the AnapnoGuard device been deployed?

AnapnoGuard systems have been deployed in several Chinese hospitals since 2017 and, in March of this year, were used across the country’s Hubei province to treat ventilated Covid-19 patients.

As well as supplying its device to hospitals in the US, Hospitech Respiration has provided the AnapnoGuard for free to multiple major healthcare facilities in Israel – in an effort to tackle the domestic impact of the pandemic.

“Hospitech offered the AnapnoGuard on a six-month loan basis to allow hospitals to start using it immediately without complicated bureaucracy, which often delays the introduction of a new technology into the healthcare system,” says Venkert.

“Once the number of ventilated patients in the Israeli system spiked, we were quick to step up and the decision was made in a matter of days.

“Consequently, four hospitals in Israel have decided to adopt our systems, and our close work with hospitals and ICU staff across the globe has allowed us to see the need in real time.”

Professor Gil Bolotin, director of the department of cardiac surgery at the Rambam Medical Centre in Haifa, Israel – one of the facilities that has installed the device – says: “My department has been using the AnapnoGuard system when treating high-risk ventilated patients.

“During this time, we have seen a significant reduction in the number of patients who developed lung and pulmonary infections following intubation.”

In November 2020, Hospitech Respiration also announced that, in response to increased global demand for its airway management system, it would be working with Chinese firm AwakeZone to open a new manufacturing facility in China, and expand production of the AnapnoGuard in the country.

The system is now making its first move into Europe too – with several units arriving at hospitals in Italy, and clinical use expected to begin later this month following initial training being conducted via Zoom.

The sharp rise in demand for devices like Hospitech Respiration’s AnapnoGuard indicates that, as well as prompting growth in the global ventilator market, Covid-19 has raised awareness surrounding complications that can occur in ventilated patients.

“During the first months of the Covid-19 outbreak, many medical teams made use of ventilators – which in turn led to an unusually high death rate,” says Venkert.

“Some research has suggested that about 50% of patients who died from Covid-19 had a secondary bacterial or fungal infection caused by prolonged ventilation.

“This has led to greater attention in quality solutions like the ones we provide, as well as drawing a lot of attention from healthcare providers who are keen to learn about new and innovative ways to reduce ventilator-associated complications.”

Of course, the severe complications that can arise in mechanically-ventilated patients are not news to respiratory specialists, and field experts all over the world were already fully aware of potential risks like infection and lung damage prior to the Covid-19 outbreak.

However, now that ventilators have become one of the most critical and frequently-used medical devices in patient care across the globe, it seems inevitable that interest in novel technologies like the AnapnoGuard system will only continue to grow as well.