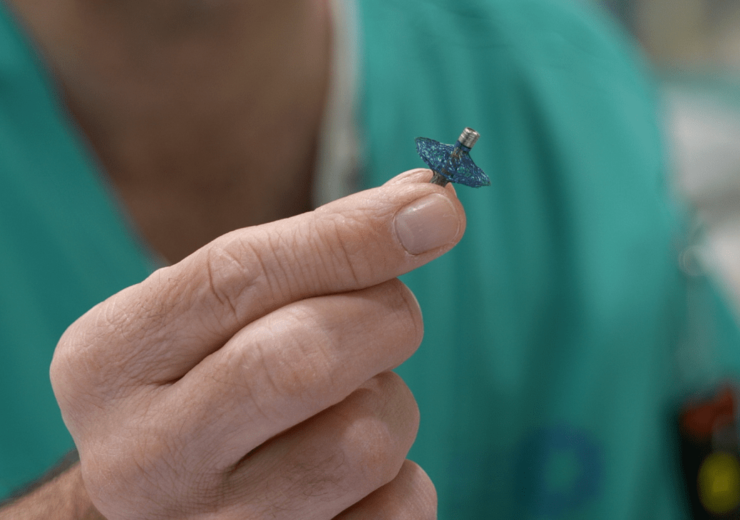 The V-LAP implant is inserted into a patient's heart using a catheter - avoiding the need for open heart surgery (Credit: Vectorious)

The emergence of virtual appointments and online prescription services has led remote forms of healthcare to rapidly become today’s reality, rather than a thing of the future. Jamie Bell speaks to Vectorious CEO Oren Goldshtein about the company’s implant device that could change how doctors monitor heart failure patients for good.

The latest innovations in wearable technology mean we can now self-monitor much of our physiological data — including heart rate, blood pressure and even sleeping patterns.

And, for the average healthy person, smartwatches and other devices are enough to track basic health status in a meaningful yet convenient manner.

For seriously ill patients with chronic heart conditions, however, regular visits to specialist centres have remained the only option.

Class III heart failure patients — whose condition is considered moderate, but is also one class away from the highest level of severity — need to attend appointments at least every two or three months.

But Vectorious, a medtech start-up based in Tel Aviv, Israel, has developed a microcomputer device that can be implanted into the body, allowing heart failure patients to be monitored remotely by their doctor.

Not only can the company’s V-LAP implant be used to take readings at home, easing the burden of regular check-ups on severely ill patients, but it can take these readings daily.

The device, therefore, means doctors can receive a patient’s heart data far more regularly than a hospital could hope to achieve with face-to-face appointments.

Vectorious CEO Oren Goldshtein hopes this could one day help save lives by detecting symptoms of worsening heart failure at the earliest opportunity.

“For chronic cardiac diseases, such as heart failure, the pathophysiology is clear — it all starts with an increase in pressure in the left side of the heart,” says Goldshtein.

“This is the holy grail for cardiology — but the thing is, until now, cardiologists have only been able to measure this in a hospital setting.

“We have the only technology in the world that allows you to read this most specific, early parameter in the home setting — this is what we bring to the table.

“And, I think, for heart failure patients, this is the ultimate device because it provides the most specific physiological indication for managing the disease. There’s no argument about the specificity of the data it produces.”

Goldshtein, whose background is in electrical engineering, co-founded Vectorious in 2011 with doctor and businessman Eyal Orion — who is now the company’s chairman.

At the time, the only way to understand what was happening in a patient’s heart was to insert a catheter with a pressure-sensing tip into their body. This was an expensive procedure that could only be performed in a hospital setting.

Following a meeting between Goldshtein and Orion, the pair decided this was not an adequate solution for heart failure patients, and they worked together to create the V-LAP device — the world’s first in-heart microcomputer for remote monitoring.

The firm received its first investment in February 2015, in the form of a $5m Series A funding round led by Israeli medtech investor RAD BioMed Accelerator.

Vectorious has since received a total of $18.6m in funding — which includes a $9m Series B funding round in May 2018, and an investment of $2m from US-based healthcare product supplier Fresenius Medical Care later that year.

In 2019, a handful of heart failure patients across Europe became the first people anywhere in the world to be implanted with the company’s device.

Heart failure is a condition in which the heart becomes damaged and cannot pump enough blood around the body, and, if this goes untreated, it can lead to a potentially fatal pulmonary oedema in which fluid leaks into the lungs.

The earliest, most specific known physiological indicator of this is an increase in left atrial pressure — and the V-LAP device can measure this in a matter of minutes.

In a minimally-invasive catheterisation procedure taking just minutes, the device is inserted into a patient’s body, where it rests directly on the interatrial septum — the wall of tissue separating the heart’s left and right atria.

From there, it can record blood pressure levels in a patient’s left atrium and present this data to their doctor in the shape of a high-resolution waveform.

The V-LAP itself is wireless and is powered by an external, portable belt device that connects to the implant and allows patients to take pressure readings “at the press of a button”.

The implant then sends these readings from the heart back to the belt, which transmits it to the cloud, allowing doctors to access it via an AI-based web interface that presents the data in a user-friendly way.

Why Vectorious’ device is important

Patients can use the implant to take a left atrial pressure reading as often as once per day.

By looking at average pressure readings over the past two weeks, or a month, doctors can instantly spot an increase in pressure and react accordingly.

This will often mean making changes to the patient’s daily medication programme. For example, increasing their diuretic intake can help to bring the pressure in the left of the heart back down to a normal level.

As well as detecting problems in heart failure patients at an early stage, potentially preventing life-threatening health complications, the implant also enables doctors to see if changes to a patient’s medication have worked.

“What this means is they can try something else if the pressure does not come down the following month,” says Goldshtein.

“This gives feedback to the doctor and allows them to really manage their patients in a way that was not previously possible.”

Goldshtein adds, Class III heart failure patients — whose physical activity is significantly limited — will be hospitalised twice per year on average due to their condition, with each admission costing about $10,000.

In the US alone, heart failure hospitalisations cost hospitals $40bn each year, while a NICE (National Institute for Health and Care Excellence) report in 2018 found heart failure admissions in the UK cost £2bn ($2.5bn) annually — 2% of the total NHS budget.

“The economic value is clear — this is our claim to fame,” says Goldshtein.

“But what’s even more important is improving the treatment and the quality of life for these patients.”

Ongoing clinical trials and the impact of Covid-19

European trials of the V-LAP started in 2019 to test the effectiveness of the device and ultimately gain a CE-mark for use across Europe.

So far, 13 heart failure patients have been enrolled in these trials, and Vectorious plans to enrol a total of between 30 and 45 participants in Italy, Germany, the UK and Israel.

The Covid-19 crisis has disrupted attempts to test the device — particularly in Italy, Germany and the UK — but the company is now close to getting its clinical trials back on track, according to Goldshtein.

“The pandemic is indeed a challenge, but it has also given a significant boost to remote patient monitoring and treatment,” he adds.

“Things will not return to the way they were and this is especially true for chronic diseases. This is an opportunity for us to strengthen our offering.”

Before the coronavirus outbreak, remote monitoring was used to complement visits to the clinic, but Goldshtein anticipates this trend being turned on its head by Covid-19, with occasional trips to the hospital for check-ups combined with regular remote monitoring – even after the crisis.

For Vectorious, the next stage will be to gain approval from the US Food and Drug Administration (FDA).

American trials are expected to start later this year, and Goldshtein estimates the V-LAP will receive FDA clearance for use in the US by 2025.

The future of remote patient monitoring

Right now, the device is solely being used in Class III heart failure patients, but Vectorious also plans to roll out the implant for Class II and asymptomatic patients as well.

“Heart failure is progressive — if you have a mild, asymptomatic patient, in a couple of years they could be a Class III patient,” says Goldshtein.

“So, there is no logical reason not to implant the device, in the future, in more mild, and asymptomatic patients.”

And chronic heart failure is just one of the many conditions that could be monitored using data collected by implantable microcomputers in the future.

The high-resolution waveform produced by the V-LAP can also provide data on how the heart’s valves are opening and closing, which Goldshtein says can flag up other malfunctions including mitral regurgitation — where blood flows back into the atrium of the heart — and atrial fibrillation, which is characterised by an irregular, and often faster, heartbeat.

He notes that one of Vectorious’ physicians has even demonstrated the ability to detect sleep apnoea in a patient using data from the left atrium.

Goldshtein believes the potential for this type of technology is “huge”, as devices implanted elsewhere in the body could monitor additional chronic diseases eventually — but he also emphasises the need for governments to invest further in remote monitoring infrastructures.

“Devices like the V-LAP will be developed, and eventually they will reach the market,” Goldshtein adds.

“So, the technology is out there already, but it’s also about the money. If a cardiologist will not get paid for looking at patient data, they will not do it.

“It’s about who receives the data, who acts upon the data, and who receives payment for looking at the data — and the infrastructure is not necessarily there yet.”