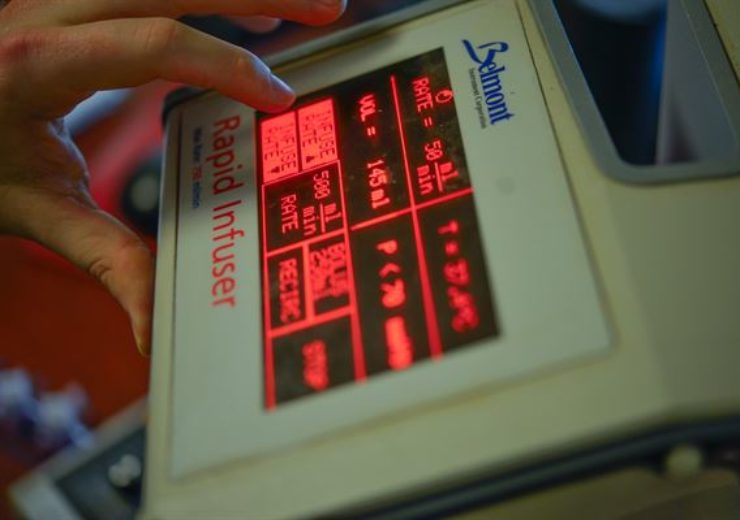 These pumps are used in hospitals to control and deliver doses of medication, and, because they can be set to do this without constant supervision, allow doctors and nurses to treat patients with minimal exposure to infection.

With concerns over the availability of these devices growing, we’ve taken a look at five key companies manufacturing infusion pumps across the world — including giants in the healthcare sector and smaller, specialised firms.

Despite still being headquartered in Bad Homburg vor der Höhe — the German town it was first established in — the company has increasingly expanded into the US in recent years, selling a variety of technologies, and pharmaceutical products, used to care for critically or chronically ill patients.

It has been working on infusion technologies for nearly 50 years, and today produces several types of smart-connected pumps that all use its Agilia infusion system.

Fresenius’ most prominent infusion pump is the Volumat MC Agilia — a small, lightweight portable device designed for use in a range of different areas within the hospital setting.

The pump is also equipped with a software called Vigilant Drug’Lib Agilia, which reduces the risk of in vitro drug administration errors and allows healthcare professionals to customise their drug libraries to suit the specific context the device is being used in.

Q-Core Medical was founded in 1996 before being purchased in 2009 by Dr Boaz Eitan, who also worked in the US-based tech innovations hub Silicon Valley for 11 years.

He was replaced as CEO and chairman of the company by fellow Israeli businessman Igal Shany in February 2020.

The firm, which is based in Netanya, Israel, is a medical product manufacturer that specialises in infusion delivery systems for use in both hospital and homecare settings.

Its range of pumps — referred to as the Sapphire family — all use Q-Core flow control technology, which, according to the company’s website, enables devices to have “exceptional versatility, accuracy and reliability”.

Q-Core’s infusion pumps are also notable for being small and light, achieving “unprecedented” low cost of ownership, and the fact they come equipped with a full-colour touch-screen and user-friendly interface.

While Q-Core’s Sapphire Multi-Therapy product is designed to be used across a range of healthcare settings, the Israeli firm also makes a pump dedicated solely to administering epidural anaesthetic.

BD became a major player in the infusion pump market after acquiring CareFusion — a California-based medtech firm — in 2014.

Under this acquisition, BD gained several Alaris infusion products that are used in oncology, pain management, neonatal and pediatric care, and critical settings like ICUs (intensive care units) and ambulances.

Many of these infusion pumps feature Guardrails safety software, which, according to the company’s website, reduces intravenous medication errors, tracks and measures system performance, and improves the overall quality of patient care.

A report by Indian market research firm MarketsandMarkets in March 2020 found that BD held the largest share of the infusion pump market in 2019.

It was founded by Greek businessman Alexandre Tsoukalis — who is also the current CEO, and has a background in electrical engineering.

Alongside its Rythmic infusion pumps, which are designed for chemotherapy, antibiotics infusion, pain management and a range of other therapies, Micrel offers several syringe driver devices as well.

The company’s Mini Rythmic PN+ product is a portable, ambulatory pump that can also be monitored — and even controlled — remotely by doctors using Micrel’s wireless GPRS technology, Rythmic Connect.

Micrel sells several accessories designed to make its infusion pumps even more portable, including battery packs, power adaptors and rucksacks to carry the devices in.

American healthcare firm Baxter International was founded in 1931 as the first-ever commercial manufacturer of intravenous solutions.

Throughout the 20th century, Baxter was responsible for several pioneering medical innovations including a container that allowed plasma to be separated from blood in storage, the first commercial dialysis system and a flexible, plastic container that reduced the chance of contamination during infusions.

Baxter still sells these devices today and, according to its website, the Spectrum IQ pump is the only product of its kind on the market featuring a dose/rate change alert — which is designed to stop potentially inaccurate or harmful drug doses reaching the patient.

Baxter also produces its own Evo IQ infusion system. This device is “designed for the future” as its flexible technology means it can be integrated with electronic medical records (EMR), and can adopt other new medical capabilities like e-prescriptions.

Today, Baxter employs about 50,000 people, and its range of products, which are primarily used in the treatment of haemophilia, kidney disease, immune disorders, and many other chronic and acute medical conditions, are available in more than 100 countries.

Ypsomed introduces new autoinjector for volumes up to 5.5 ml