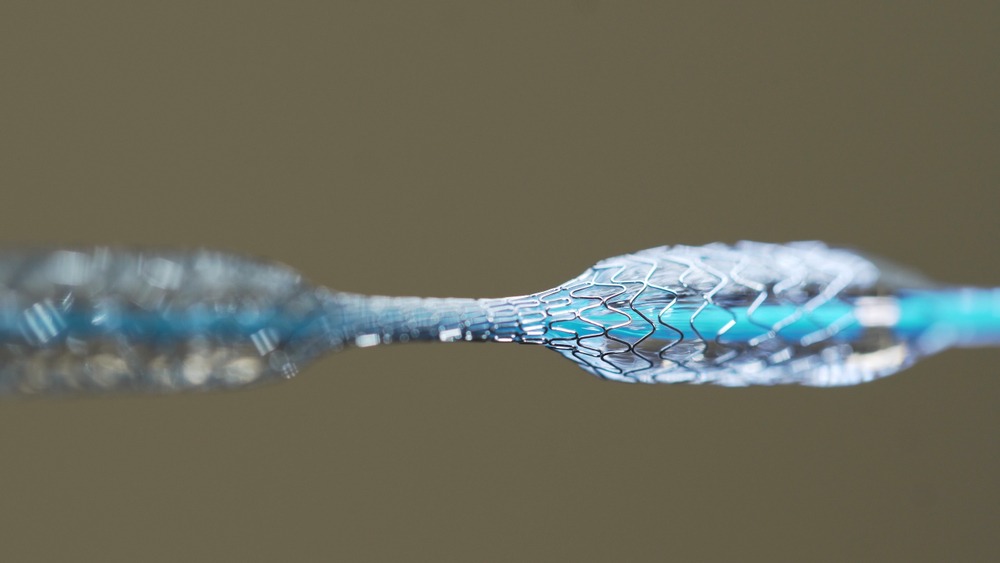 The shape memory alloy nitinol is used to manufacture stents due to its ability to self-expand after implantation (Credit: Shutterstock/Alexpunker)

In simple terms, an alloy is just a mixture of metals, but combining certain materials can result in what’s called shape memory, and discovering this resulted in several breakthrough uses in the world of medical devices.

One of the most common applications in medicine is the coronary stent, but due to the high biocompatibility of one particular shape memory alloy, uses have included artificial joint implants, orthodontic braces and orthopaedic wire that holds bones in place while a fracture heals.

On top of this, researchers are studying the feasibility of micro valves made from thin films, fatigue resistant composites and robotic actuators with tactile feedback.

Here, we explain what shape memory alloys are, which of them are used in the medical field, and list some of the life-saving and life-improving applications they have.

What are shape memory alloys?

A shape memory alloy is, in essence, a combination of metals that has the ability to return to a certain shape if the temperature is conducive to it doing so.

The discovery of this property was made in the 1930s by Swedish chemist Gustav Arne Ölander, who worked with an alloy of gold and cadmium.

He found that the alloy could be plastically deformed when cool and then be heated to return to, or remember, the original dimensional configuration.

Despite this being a breakthrough for the science behind metallurgy, the shape memory effect was minimal compared to that of a new substance discovered in the early 1960s – nitinol.

A mix of nickel and titanium, the material’s double-state – two different combinations of chemical energy within the solid – was discovered by US metallurgist William J Buehler when he observed the difference in sound when he dropped a cooled ingot on the floor and it landed with a dull thud as opposed to the metallic clang of a non-cooled one.

From here, further findings revealed the ability of nitinol to be twisted and bent over and over until the object was unrecognisable from its starting point, at which point heat could be applied to speed up a complete reversal to return to its original shape.

This ability is now known as superelasticity, described as an elastic, or reversible, response to an applied stress and generally compared to the stretching and releasing of a rubber band.

Buehler named the alloy nitinol, which stands for Nickel-Titanium Naval Ordinance Laboratories – the latter half of the name a reference to the lab in which he made the discovery.

It was another 20 or so years of study into how exactly the shape memory effect took place in nitinol before it was used for commercial applications, first in eyewear by a list of companies that included sportswear giant Nike, and then in dentistry and finally in medical devices.

Now, the medical field is the largest consumer of nitinol worldwide, and its list of applications is constantly being expanded.

But isn’t nickel toxic for the human body?

One important question had to be addressed before the medical community embraced nitinol, and it was to do with the high concentration of nickel, which tends to be slightly over 50% in the material.

Nickel is not inherently harmful to humans unless it enters the bloodstream in extremely large quantities, as the kidneys and liver ensure it is flushed out one way or another.

But some estimates put the amount of people that have a nickel allergy as high as 30% in the US.

Couple this with the fact that a nickel allergy can develop at any age and it’s clear why the medical community were reluctant to consider nitinol for surgical implantation.

The reason it is the go-to material for this purpose now, however, is the near-equally high volume of titanium – a metal that has proven to be unsurpassed by any other in its biocompatibility.

Despite early reservations about its potential uses, it’s been proven in countless studies that this unique balance of both metals within the shape memory alloy induces no toxic effects, decreases in cell proliferation, or inhibition on the growth of cells in contact with the metal surface.

The first nitinol-constructed medical device to be approved by the FDA was the Simon nitinol filter, which was implanted as a preventative measure for patients at severe risk of pulmonary embolism (PE) – a blood clot in the lungs – or those with a contraindication to anticoagulants (blood thinners) like warfarin.

Pulmonary embolism occurs most commonly as a progression of deep vein thrombosis (DVT) – a blood clot in the leg – that travels to the lungs through the circulatory system and blocks blood flow through the pulmonary artery, which carries deoxygenated blood from the right ventricle of the heart to the lungs.

Pulmonary embolism is the third most common cause of death in hospitalised patients because it usually presents with mild to no symptoms until the course of the disease becomes life threatening.

In one third of cases, the cause of death is cardiac arrest, which develops as a lack of blood flow forces the right ventricle to overload itself and eventually fail, causing right atrial pressure and resulting resulting in cardiogenic shock.

The Simon nitinol filter, and the blood-clot prevention devices that preceded it, are implanted into the inferior vena cava, which acts as a channel for blood flow between the lower and middle body into the right atrium of the heart, and they catch clots before they can cause PE.

The reason nitinol is so vital is that it can be cooled to retain a small enough form factor to be inserted into the IVC, and once the temperature on it increases due the new environment, will extend into its full state safely.

Cardiovascular stents operate in a similar fashion to ICV filters, but are instead of trapping blood clots, they’re used to widen the arteries

There are two main indications for stent implantation.

The first is the treatment of acute or threatened artery closure following balloon angioplasty – an endoscopic procedure in which arteries are widened by an expanding ballon-like device.

Stent placement in this setting has been documented to result in decreased need for emergency surgery in multiple observational studies.

The second is implantation to maintain the widening of the arterial wall orchestrated during surgery.

But while these stents used to be constructed from bare metal, usually stainless steel, alloys are now the preferred choice, and although stainless steel alloys are still the most common, nitinol has been shown to have vastly lower thrombogenicity – the chance the stent itself will interact with the blood and cause a clot.

WaveBlock introduces new technology to protect yourself from EMF Radiation