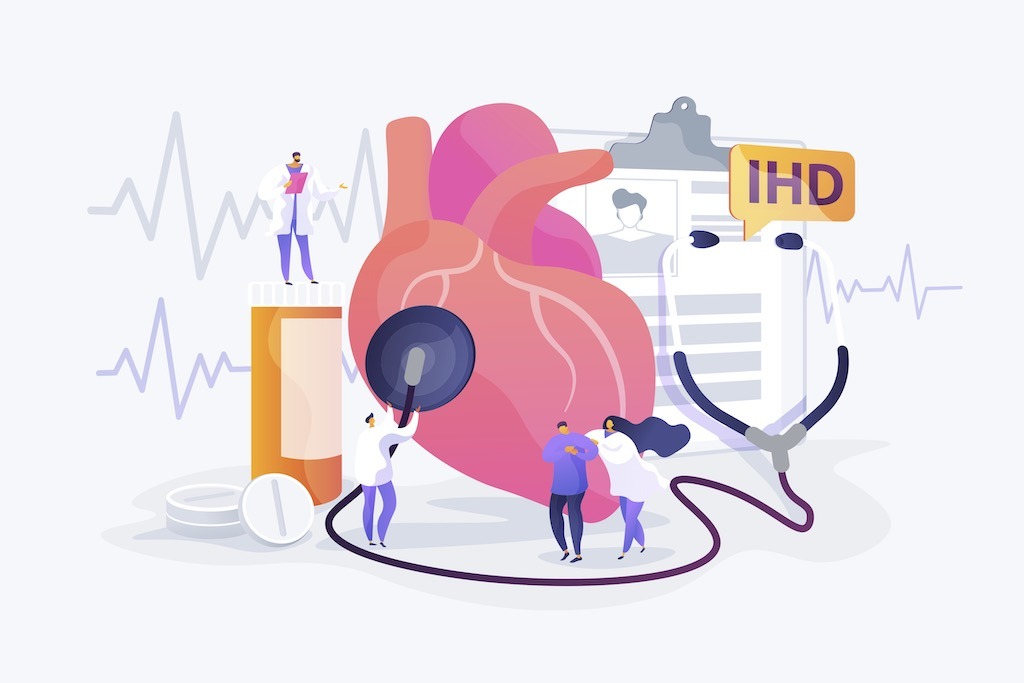 The heart is a complex organ that can require different imaging methods depending on a patient's symptoms (Credit: Shutterstock/Visual Generation)

The early detection of heart disease is possible with various medical devices, and if caught before a serious cardiac event occurs, a prevention plan can increase life expectancy dramatically.

A heart attack is usually the result of coronary heart disease, a buildup of fat in the arteries (atherosclerosis) caused by a poor diet and lack of exercise.

But as the recent cardiac arrest suffered by Danish footballer Christian Eriksen showed, even the fittest, healthiest individuals can go into cardiac arrest after showing no symptoms of heart irregularity at all.

As Eriksen was being scanned routinely for abnormalities, it will likely take time before any light is shed on what occurred on the pitch, and the knowledge may never become public.

For non athletes however, the warning signs tend to be more glaring, and many technologies have developed to pick them up early.

Here, we take a look at five devices used in the medical field to detect heart disease before a cardiac event can occur.

An image of the inside of the chest taken by an X-ray machine is usually ordered by a doctor when a patient is experiencing symptoms that could indicate problems with the heart or lungs, like shortness of breath.

During the process, the machine will send X-rays through a tube that pass through a patient’s chest and are absorbed on the film behind them to create a picture.

Bones and other dense areas show up as lighter areas, while areas that don’t absorb the radiation appear darker.

Chest X-rays are good for the detection of more obvious abnormalities, like enlargement or atypical positioning of the heart, but aren’t so useful when doctors need a more in-depth look at the vascular system that supports it.

The humble CT scan is one of the most commonly used tools in hospitals, giving radiographers a more in-depth view of the heart.

Unlike x-ray radiography, the detectors of the CT scanner do not produce an image.

Instead they measure the transmission of a thin beam of rotating x-rays through a full scan of the body.

The image of that section is taken from different angles, and this allows the system to retrieve the information on the depth of arteries in 3D, reconstructing an image from the raw data using complex algorithms.

The benefit of this is a much more granular picture than a 2D chest X-ray can provide, allowing doctors to see the extent to which arteries have narrowed, and get a better idea of how much the heart has enlarged if it has at all.

In some cases, doctors will order a CT angiogram – a procedure in which a dye is injected into the veins to better highlight blood vessels in order to detect congenital defects and blood clots, among other conditions.

The above methods take a snapshot of the heart and its surrounding structures, but sometimes it’s necessary to see it in action to detect certain abnormalities.

One of the tools at doctors’ disposal is an echocardiogram, also known as an echo, which effectively performs an ultrasound of the heart.

An image of the organ is created using sound waves produced by the echo machine that travel out of a transducer into a conductive gel and through the chest.

The sound waves bounce off organs like the heart and return back to the transducer, which transmits information about the timing and pattern of returning sound to the echo machine as electricity, where it’s transformed again by the unit into an active 2D image.

A strength of the echo machine is that it can also give insight into blood flow throughout the heart, which can help physicians on their path to diagnosing a range of conditions, like weak heart muscles or high blood pressure.

Usually, a patient with suspected heart disease will undergo an echo to confirm there’s an irregularity before other tests are ordered that give more granular insight to complete a diagnosis.

An electrocardiogram, or EKG, is the most frequently ordered heart test, used as part of a generalised physical exam as well as in conjunction with an echo when a heart abnormality is suspected.

The process involves attaching 10 small sticky pads along the chest wall that attach to the EKG machine through wires that transmit data collected from the electrical activity of the heart.

The output is an image report of the heart’s electrical activity known as a tracing, and through recording this information, doctors can see irregularities, like a fast or slow heart rate, which can point to various heart disease states that may require additional detection methods to diagnose.

In some cases, a patient may be contraindicated for a CT scan or an X-ray due to the amounts of radiation involved, especially in the case of pregnant women due to the risk of causing developmental issues to the foetus.

In this case, and in cases where a CT scan can’t provide the level of soft-tissue detection required to diagnose a heart disease, a magnetic resonance imaging devices, known more commonly as a MRI machines, are used.

The technique involves using powerful magnetic pulses that disperse molecules in the water that makes up more than 60% of the human body.

When these molecules fall back into place, the energy they produce is measured by the machine and translated into an incredibly detailed image of the heart.

CT scans are still used more often due to the high cost of MRI and the fact that multi-slice scans are better for detecting blockages.