Since its discovery in the 1960s, the nickel-titanium alloy known as nitinol has been used for its shape-memory properties in the design of components such as thermal actuators. It has since found more widespread use, however, in the biomedical industry. Dr Bernd Vogel from Endosmart explores its advantages and disadvantages in the implant and instrument sector, and looks at the latest research on the material. 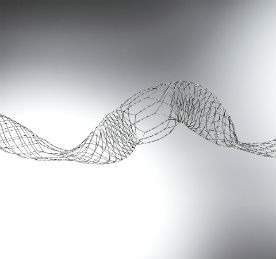 The phenomenon of the shape-memory effect in metals is one of the most intriguing in material science. A piece of metal can be deformed quite easily, such as by simply winding a wire around the finger, but dipping it into hot water appears to completely reverse the change.

The first observation of such an effect goes back to the 1930s, when Arne Ölander, a Swedish chemist, reported "rubber-like" behaviour in a gold-cadmium alloy. It wasn’t until 1962 that researcher William J Buehler discovered these properties in a family of nickel-titanium alloys at the Naval Ordnance Laboratory (NOL), naming the family of this alloy NiTiNOL.

Since then, nitinol has seen wide usage for its shape-memory properties, and the majority of commercial applications of the material take advantage of its extreme elasticity, also known as superelasticity. In this state, the substance can tolerate a considerable amount of bending without taking a permanent set. The extreme elastic properties revolutionised medicine.

Down to the wire

In the medical device industry, many procedures involve the implantation of a wide range of metallic constructions, but traditional materials like stainless steel and titanium lack the flexibility and elasticity inherent in living tissues. The absence of biomechanical compatibility has a negative effect on adjoined tissue, resulting in unfortunate scenarios such as the loosening of bone implants. As seen in in the graph opposite, however, the properties of nitinol are far closer to living tissue than other materials.

With this in mind, the first bone clamps were developed in the 1970s. Around the same time, the dental industry found that using nitinol wire as arch wires in braces improved dental results. In the early 1990s, nitinol superelastic tubing became available, and it has since been the material of choice for vascular implants such as self-expanding stents, blood filters and grafts.

Its widespread use can be attributed not only to these remarkable properties, but also to several lesser known – but equally important – features, like constant stress and stress hysteresis, excellent biocompatibility, and high corrosion resistance. These features opened the field for all kinds of implants, instruments and accessories in minimally invasive therapies, mainly in endoscopic surgery and interventional radiology. Within the past two decades, for example, surgeons became able to more easily reach a point of interest in the body with a flexible endoscope. These minimally invasive procedures resulted in the need for instruments that could pass the pathways of the working channel in flexible scopes within the body.

Besides giving the patient the most atraumatic procedure, device users also seek to reduce operating times.

One of the first instruments developed in this field was the guide wire. With the use of stainless steel, kinks often developed in wires during use, meaning they had to be removed and the procedure started again – but this is avoided with a kink-resistant nitinol wire. Due to its elasticity, the ability of the wire to follow a tortuous path in the body and still rotate smoothly leads to improved performance. In material science, these wires fall into the category of deformation-resistant applications, but the largest family of medical instruments is the group of shape-restoring applications. These products are temporarily deformed in order to be introduced into the body, and then spring back to their original shape to perform their intended function, such as loops, snares, retractors and baskets, used to remove foreign bodies or blood clots.

Since nitinol is much more expensive than stainless steel, and difficult to process, shape and join, it is only used when other options fail. This is the case, for example, in stone retrieval devices in the urological tract. Seeking instruments for the minimally invasive surgery that would reduce the pain and recovery time of the patient, nitinol solutions were developed.

Retrieval devices made from this substance are designed for grasping, manoeuvring and extracting stones or debris during endoscopic procedures. Based on the client’s demand, they can be supplied in different sizes down to 1.3Fr – with or without tip; straight or helical.

Especially in the tipless design, the superelastic properties of nitinol are essential. Without these, a ball-shaped structure with a diameter of up to 16mm applied through a channel of down to 0.3mm would not return to its original shape after the huge deformation. This atraumatic ball-shaped design is needed to retrieve stones even at the wall of the calices. A fast opening and close stone approximation for proximal and renal calculi improves functionality, and a flat-wire design and special braiding of the sheath provides additional strength.

In this design figuration, the wires have to be connected to each other at the distal end. Joining nitinol with a heat-impacted method like welding or brazing reduces the elastic properties in this region, creating the risk of breaking wires. Other methods, like enlacing or gluing the wires, are the methods of choice for connecting these wires, and gluing is the best choice for atraumatic solutions.

In the field of bonding nitinol to nitinol, or to stainless steel, basic research for improvement is ongoing. In the case of gluing, an interface layer between the glue and metal is essential to improve adhesion and long term stability. Since retrieval devices are disposable instruments, the joining has to withstand ethylene oxide sterilisation without any impact. In cases where the instruments are reused, cleaned and sterilised in the hospital, the joining also has to have a long-term stability against aggressive cleaning solutions, heat of up to 130°C and humidity.

As the joining of nitinol is one of the most challenging factors in the processing of the material, the goal in the development phase is always to design instruments and implants out of one-block raw material components. In the field of instruments, this results in a design of continuous wires without the need to join the end effector (basket) to the shaft (drive cable). Such a joining would result in a crimping or welding sleeve, which would make this region thicker in diameter and more resistant to bending, with the possibility of breaking.

When you get to the point where nothing else works, you can afford to use nitinol.

In the case of retrieval devices with a tip, designs are developed that are made out of one single, slotted wire, which also provides maximum radial forces. This design also improves the torque, which enables better stone capture by rotation.

Besides giving the patient the most atraumatic procedure, device users also seek to reduce operating times. This can be done by integrating several working channels into the flexible endoscopes, enabling clients to work with different instruments at the same time, or by using multifunctional instruments to avoid having to pull one instrument out of the long working channel and introduce another.

One of the latest innovations in the field is a laser basket. The co-axial design provides the instrument with an open-ended hollow lumen, starting at the handle, running through the shaft and up to the basket. This allows the protected positioning of laser fibres in the centre of the instrument, even making possible the pre-mounting of a laser fibre. This results in an instrument with which one can break or dust stones and retrieve them within the same procedure.

For manufacturers, almost all forms of raw material are available today: wires of 15µm-6mm in diameter, sheets of 20µm-3mm in thickness and tubings of 0.2-30mm in diameter. One of the newest developments in the field is the sputtering process of thin films of nitinol for use in very small stents, valves and actuators. The extrusion of complex cross sections, the casting of nitinol and deep drawn articles are not yet commonly available, but processes are being developed within specialist companies.

Generally speaking, nitinol is expensive, and difficult to process and machine. But its unique properties, such as superelasticity, shape memory, biocompatibility and fatigue resistance, make it essential for medical applications. For some applications, therefore, it is the only possible solution. As Joseph Kain, product manager at Johnson Matthey says: "When you get to the point where nothing else works, you can afford to use nitinol."