The fervent desire for increased image clarity and sharpness is more often associated with the tech-savvy early adopters of consumer electronics, but such technology plays a vital, and often overlooked, role in the medical sector. Zeljko Loncaric, marketing engineer at congatec, explains the importance of image resolution in healthcare and why HD soon won’t cut it anymore. 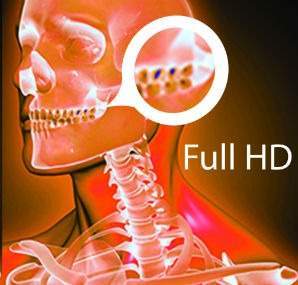 The history of healthcare is a roadmap of how technological developments have enabled advances in diagnosis and application, and it’s a journey that is far from over. Massive strides are being made through global collaboration that is increasingly underpinned by technology.

Fundamental to any breakthrough is the ability to communicate; be that a process, revelation, understanding or even a question.

Human nature means we communicate in many ways, through sight, sound and other senses.

It follows, then, that any technology that harnesses the potential of our senses will deliver greater results. Medical diagnostics relies heavily on data gathered through investigation and observation, and, as the performance of imaging technology improves, it continues to deliver greater insights conditions. Displaying that information in a meaningful way will not only improve visibility for physicians but also allow that insight to be communicated more effectively.

While many of the technological breakthroughs made in the medical domain will remain there, there is one development that has implications in many sectors: the move to ultra-high-definition (UHD) video content. By some, it may be seen merely as the latest evolution in consumer home entertainment, but the clarity and detail offered by UHD provides greater opportunity for medical imaging solutions in diagnostics, preventative medicine, virtual/augmented surgery and aftercare.

UHD is also referred to as ‘4K’ because it offers 4,000 horizontal pixels and around four times as many pixels-per-frame than standard full high definition (HD) – 8.3 megapixels vs 2.1 megapixels. It can be argued that the (un)availability of content when full HD came to market impeded consumer uptake. However, the benefits it provided in medical imaging were quickly appreciated. Likewise, the level of resolution delivered by 4K in medical applications will undoubtedly support its rapid adoption.

The importance of medical imaging cannot be overestimated; the ability to visualise at the cellular level provides incredible clarity for a range of conditions. Correspondingly, providing a hardware platform able to deliver the highest possible resolution will promote investment and advancements in a range of imaging technologies.

Generating 4K resolution video requires a significant amount of processing power, and it may be some time before it is available in something resembling a ‘medical PC’. However, thanks to continued developments in semiconductor technology, processing power is becoming increasingly accessible to medical device manufacturers in platforms that provide incredible performance and flexibility.

OEMs in the medical domain are now evaluating solutions delivering not only greater processing performance in general but also better video content in order to take full advantage of the benefits of 4K capture and display technology as well.

State of the imaging art

Making full use of any improvement in display technology requires a corresponding improvement throughout the signal chain, and, in the case of medical imaging, this has wide-reaching implications.

CT works by taking multiple scans in the form of ‘slices’ that are then combined to reconstruct a more complete picture. It is also possible to create more-complex images by combining CT scans with 3D imaging in real time.

For the most sensitive patients, keeping the dose level to a minimum can be critical, which means the faster and more accurately a scan can be concluded the better. To this end, the industry is working harder to develop CT scanners that offer higher performance with lower dose levels, such as the dual-source CT scanners now being developed. These advanced scanners employ two X-ray sources and detectors, set at 90° to each other, which allows high-speed scans that not only use both sources but can also use dual energy levels. The use of dual energy levels makes it easier to differentiate between soft tissue, fat and contrast material based on their unique energy-dependent attenuation profiles.

The images produced can then be processed using advanced algorithms and specially developed software. Together, the dual sources/detectors provide much more data in less scan time and using lower dose levels, and the technology behind it is developing all the time.

Another important development is the integration of modalities to produce co-registered images. These allow, for example, images of soft tissue to be superimposed onto images depicting metabolic or biochemical events.

One such development said to have revolutionised medical diagnosis in some fields – and a leading example of this technique – is the PET-CT scanner. This combines an image produced using positron emission tomography (PET) with a CT scan to overlay the benefits of both modalities; the result is so compelling that many PET scanners are now being replaced with the dual-purpose machines.

Reports of the use of 4K cameras in surgery have been appearing for some years now, and, while initially criticised for their higher cost, the ability to generate images with such clarity has never been questioned. As with any other form of technology – and particularly one with many vertical markets – the cost of 4K cameras is going to come down, making them more accessible and, therefore, much more common.

With every development in procedure, and the equipment that accompanies it, the demand for space in a medical environment grows. It is crucial, therefore, that OEMs understand and react to the importance of developing equipment that performs optimally while consuming the fewest possible resources.

Large, cumbersome machines are constantly being replaced by smaller, faster and more accurate alternatives, to the point that portability – even handheld operation – is becoming the norm. Ultrasound equipment is a prime example: the semiconductor industry has reached a level where all the sensitive electronics for multiple detectors can be integrated into a single device, allowing smaller and cheaper devices.

This level of integration pervades the semiconductor industry, and it is a trend that benefits every market it enters, including medical. One of the most significant developments greater integration has enabled is the emergence of multicore processors. Intel remains the largest processor manufacturer and the x86 architecture one of the most widely deployed. It is also, therefore, one of the most popular architectures with developers at all levels.

The evolution of multicore processing is driving an era of consolidation; end equipment is smaller, more power-efficient and more capable. Access to multicore technology is also getting easier, as each new processor receives rapid support from computer-on-module (COM) specialists such as congatec, thanks to close working relationships with processor vendors such as Intel and AMD. The latest development also integrates support for 4K video generation.

With such rapid evolution in processor technology, confining a design to a single processor-variant ultimately imposes limits on performance. It is highly likely that the operating lifetime of the end equipment will be much longer than the processor. Processor manufacturers typically release a new variant every 18 months that invariably delivers improvements in every parameter. In order to reap the benefits of this, OEMs will often choose a COM that can be easily upgraded so that it always delivers an optimum solution.

One of the latest COM solutions is the conga-TC87, built on the fourth-generation Intel Core Haswell processor in a format measuring just 95mm on each side. When coupled to a baseboard (which allows further customisation and flexibility), OEMs are able to develop sophisticated devices that can process copious amounts of data – in real time – and render that data as 4K video.

The processor features Intel’s next-generation HD graphics technology, with support for OpenCL 1.2, OpenGL 4.0 and DirectX11.1. It is able to drive up to three independent displays through HDMI/DisplayPort/LVDS interfaces, at up to 4K (4,096×2,304px) resolutions.

The processor used in the conga-TC87 is Intel’s first to feature multiple GPUs (graphics processing units) and is a true system-on-chip, integrating the processor and supporting chip-set on a single device built using Intel’s state-of-the-art ultra-low-power technology. The result is a highly capable processing platform that dissipates a maximum of just 15W, allowing it to be used in fan-less equipment – a major consideration for equipment used in surgical environments and healthcare in general.

Imaging modalities in the medical market continue to improve; the benefits that visualisation offers is proving to be incredibly important in diagnosis, while the use of less-intrusive forms of surgery are increasingly enabled by smaller cameras and higher-resolution displays.

The move to 4K video will undoubtedly expand the scope of medical imaging at every level – from consultation to diagnosis, through to surgery and aftercare. The semiconductor industry is enabling this revolution in resolution by creating the cost-effective and power-efficient solutions needed to deliver the critical processing power needed.