France, Germany and Iceland were among the first countries to announce Covid-19 testing for passengers in their airports 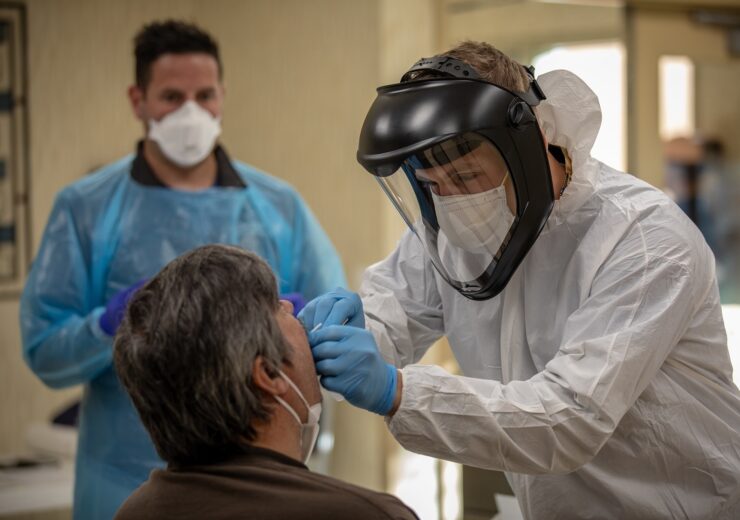 On-site coronavirus testing in airports has been touted as the key to getting the global air travel industry back on its feet (Credit: Spc Miguel Pena)

Following the devastating economic impact of Covid-19 on the global tourism industry, countries are looking at ways to mitigate this — such as testing travellers for the virus at airports.

The hope is that such testing can help governments continue to gradually ease lockdown restrictions and allow people to travel abroad again without risking a serious upturn in coronavirus infections.

Calls for airport testing from within the UK travel industry have increased following a government u-turn that saw holidaymakers advised against all non-essential travel to Spain, and the Balearic and Canary Islands.

We take a look at the latest plans to introduce Covid-19 tests to UK airports for the first time — as well as how far along this process several other countries are right now.

While the UK is yet to confirm the introduction of airport testing, London Heathrow Airport has proposed trialling coronavirus tests for all passengers arriving from abroad.

In the trial, air travellers would have to take a PCR (polymerase chain reaction) test, and self-isolate until they receive a double negative result for Covid-19 — which can take between five and 24 hours to show up.

This would mean passengers arriving from “red-listed” countries such as Spain and its islands wouldn’t need to quarantine for 14 days upon returning to the UK, unless they test positive for the virus.

Under Heathrow’s proposed testing programme, passengers would also be expected to pay for the £150 test themselves, although the airport’s representatives believe these costs could be cut if testing volumes are increased.

In a letter sent to Prime Minister Boris Johnson on 29 July, numerous executives from the UK travel industry said the government’s imposition of a 14-day quarantine for people arriving from Spain was “the latest significant blow to a sector that now risks being permanently scarred”.

The letter was signed by British Airways, easyJet and many other airlines and airports — including Heathrow itself — and stated: “We are in a situation where the government is advising against travel to areas of Spain that have lower rates of Covid-19 than the UK”.

On 29 July, Heathrow CEO John Holland-Kaye told US business publication, Bloomberg, that the airport’s proposed testing programme could be up-and-running by September, but it is still waiting to receive backing from the government.

It is also currently not clear whether other UK airports will follow suit and begin testing passengers returning from abroad for Covid-19 – even if Heathrow’s trial does gain approval.

Widespread airport testing in France was confirmed earlier in July by Prime Minister Jean Castex, who announced the system will be fully operational across the country by 1 August.

All passengers arriving in France from 16 “high-risk” red-listed countries — including the US, South Africa, Israel, Brazil, Serbia and Turkey — will be subject to a PCR test.

Those arriving from these countries can either take a coronavirus test in their own country before travelling, and present a certificate at the airport, or receive a compulsory test upon arrival in France.

These tests are being given to passengers free of charge, and the results will be emailed out to them within 48 hours. Passengers are also being advised to self-isolate until they receive their results.

People who receive a positive result will be subject to standard 14-day quarantine rules, while those who test negative will be exempt.

On 24 July, during a visit to Charles de Gaulle Airport, Castex told reporters: “The tests will be for French citizens who live in these countries, or citizens of these countries with an established residence in France.”

Several French airports — including Paris-Charles de Gaulle and Paris-Orly, and others in Bordeaux and Lyon — are also currently offering voluntary testing for people arriving in France from countries that are not red-listed.

In June, Germany became one of the first countries anywhere to deploy airport testing as German airline Lufthansa partnered with healthcare firm Centogene to provide PCR tests costing passengers between €59 ($70) and €139 ($165) at Frankfurt Airport.

Another walk-in test centre was also set up at Munich Airport in early July.

Then, on 27 July, the German government announced plans to offer free, voluntary Covid-19 tests to all passengers arriving at its airports.

However, the country’s health minister Jens Spahn declared shortly after that testing will soon be compulsory for people arriving from “high-risk” areas — which includes about 130 countries according to German public health authority The Robert Koch Institute.

Holidaymakers arriving from other areas that are considered “non-risk” will also be eligible for free testing on a voluntary basis, but these tests will take place at a local health centre, rather than the airport.

It is thought mandated PCR testing in German airports will come into effect at the start of August.

At present, these plans only concern air passengers returning to the country, and not those visiting Germany from abroad.

On 15 June, Iceland began offering passengers a choice between taking a Covid-19 test upon arrival, or quarantining for two weeks.

Keflavik Airport — the country’s largest transport hub — is the only place where passengers will be able to receive a coronavirus test on-site, as soon as they land, however.

People arriving in Iceland via its other international airports, including those in Reykjavik, Akureyri and Egilsstadir, will have the opportunity to be tested for Covid-19 at the nearest local healthcare centre.

Visitors who arrive at Icelandic airports are also being asked to download Rakning C-19 — a government-run contact tracing app.

Reykjavik-based biopharmaceutical company deCODE genetics is providing the PCR tests for this and, in a statement in July, the Icelandic government said its participation has made it possible to analyse up to 2,000 samples per day, instead of the original estimate of about 500 daily tests.

There is also one notable exception under Iceland’s current airport testing system, which is that children born in or after 2005 are not required to take a Covid-19 test, or go through the 14-day quarantine.

Sheremetyevo Airport — one of four major international airports that serve the city of Moscow — launched “express” Covid-19 testing on 20 July.

The diagnostic tests being used reportedly return results in just one hour, and are available for the equivalent of €32.55 ($38).

Despite this, it is not clear when more widespread international flights will return in Russia, or if any other Russian airports are likely to begin implementing Covid-19 testing soon.

The RDIF is also running similar projects at one airport in Japan, and another in the United Arab Emirates, Dmitriev told Reuters.

Airport testing for the virus is not yet established across the US.

To date, Alaska is the only state to have begun testing arriving air travel passengers, and has adopted a similar approach to Iceland by offering a choice between a Covid-19 test, and 14 days of quarantine. This system has been in place since early June in the state.

However, even this was subject to change recently, as Alaska’s governor Mike Dunleavy announced that non-resident arrivals will soon no longer be allowed to receive a test at the airport.

From 11 August, all non-Alaskans arriving in the state will instead have to provide evidence of a negative test before travelling — while Alaskans returning to the state will continue to be offered tests in airports.

Aside from this, airline chiefs from across the US recently wrote to the White House in an effort to introduce Covid-19 airport testing and resume transatlantic flights.

In a letter signed on 21 July by the CEOs of American Airlines, United Airlines, and several other industry giants, the federal government was urged to consider the “safe and swift restoration” of air travel between Europe and the US with an initial “pilot testing programme”.

Authorities in both the US and the European Union are yet to respond to this proposal, however — as of 31 July — and the US is also excluded from the EU’s list of safe countries, meaning only essential journeys to the states are allowed.

The city of Wuhan in central China was the first place to declare a major outbreak of the novel coronavirus at the start of the year.

As such, China led the way with many of the measures that have since been introduced globally to curb the virus’ spread — including regional lockdowns, contact tracing technology, and temperature screening in airports.

Despite this, the country has so far opted not to introduce on-site Covid-19 testing in its airports.

Instead, passengers are required to provide evidence of a negative test result before even boarding a flight to China — a rule that applies to arriving foreign citizens and returning Chinese, alike.

The Chinese government requires travellers to take a PCR test in the country they are arriving from, at a facility designated by Chinese embassies, within five days of embarking on their journey.

Foreign passengers will then be issued with a health certification, allowing them to travel, while Chinese nationals are being asked to upload their negative test results via a “health mini-programme” on mobile messaging app WeChat.