Sterilisation is a crucial step in the production of implantable medical devices. To date, no ideal method for the sterilisation of collagen-based devices has been established; physical methods are often associated with collagen denaturation and loss of stability, while chemical methods are frequently accompanied by cytotoxic side effects. Ongoing research suggests that the sterilisation method of choice is device-dependent, as Abhay Pandit, Dimitrios I Zeugolis and Luis M Delgado of the Network of Excellence for Functional Biomaterials at the National University of Ireland, Galway, explain. 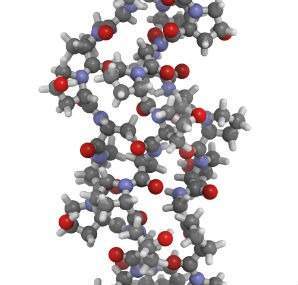 Collagen is the major structural extracellular matrix protein in human tissues. Collagen-based devices, in various physical forms (such as tissue grafts, films, sponges, fibres, hydrogels or coatings) are extensively used for biomedical applications, with the worldwide market expected to reach $3.7 billion by 2017. The attractiveness of collagen for biomedical applications relates to the fact that as a natural constituent of tissues it is perceived by the host as a normal component rather than as a foreign material; it contains several cell-recognition moieties that promote functional reconstruction/regeneration and it degrades through physiological processes. As with every other implantable medical device, effective sterilisation is also required for collagen-based devices. However, currently available sterilisation methods either compromise the stability of the collagenous structure (physical methods) or raise cytotoxicity concerns (chemical methods). Here follows a snapshot of the main sterilisation methods available for collagen-based devices and how they affect collagen stability and properties.

While g-irradiation is an attractive sterilisation method due to its high efficiency and lack of chemical residues, it induces chain scission in non-cross-linked and cross-linked collagen-based devices; reduces tensile strength; increases elasticity; and accelerates degradation rate. The extent of these effects has been shown to be dose-dependent. For example, the mechanical properties of trabecular and cortical bone are significantly reduced when the g-irradiation dose is over 25 and 60 kilogray (kGy) respectively; and bone is more susceptible to fracture under cyclic loading when it is sterilised at over 30kGy. Tendon grafts are irradiated at 20-25kGy, although they maintain their mechanical properties; resistance to enzymatic degradation and denaturation temperature is reduced, which may be related to triple helical scission. The observed surface denaturation may also increase the availability of arginine-glycine-aspartic acid (RGD) motifs, enhancing cell attachment and possibly improving host tissue integration. Collagen type I sponges sterilised at 25kGy lose their porous structure and osteoinduction capacity.

E-beam irradiation has been proposed as an alternative sterilisation method to g-irradiation and chemical methods. However, e-beam irradiation is associated with structural losses; decreased maximum strength, stiffness and resilience; increased elongation capacity; and accelerated degradation rate. Tissue grafts have been shown to maintain mechanical strength and stability over a year after e-beam sterilisation when stored at room temperature or under refrigerated conditions, making it a favourable sterilisation method for tissue banks.

Different strategies such as defatting or low temperature during e-beam irradiation have been proposed to minimise adverse effects but without success. Only radioprotectant moieties and exogenous cross-linking have been shown to improve stability in the same way that they do in the case of g-irradiation sterilisation. However, most studies only examine the beneficial effect of radioprotectant treatments that prevent damage rather than the biological influence on the host. Therefore, radioprotectant treatments remain the subject of further investigation.

Gas plasma sterilisation is an alternative method that preserves collagen integrity, does not alter platelet aggregation, and avoids structure alterations and toxicity phenomena associated with g and e-beam irradiation and ethylene oxide methods. Additionally, gas plasma requires low temperature during the process, avoiding denaturation issues. However, gas plasma is only efficient when sterilising thin films, while the use of any packaging reduces its efficacy. In addition, gas plasma versatility is reduced because it requires a vacuum; and, therefore, only dry collagen-based devices can be treated. Although current results are promising, no investigations have been found that study the influence of gas plasma sterilisation on mechanical properties, and in vitro and in vivo biological effect of collagenous devices.

"Tissue grafts have been shown to maintain mechanical strength and stability over a year after e-beam sterilisation, when stored at room temperature or under refrigerated conditions, making it a favourable sterilisation method for tissue banks."

Ethylene oxide is a chemical sterilisation method that has been extensively employed to sterilise collagen-based devices due to its high efficacy and reproducibility. This sterilisation method requires an essential aeration post-treatment to remove hazardous residues. The sterilisation efficiency of this method has been shown to decrease more than 60% due to the presence of humidity and, consequently, collagenous devices have to be treated in a dry state.

Although ethylene oxide sterilisation has been shown not to alter structural characteristics, it decreases collagen helix stability and elastic modulus, but not the maximum strength and degradation rate of non-cross-linked and cross-linked collagen scaffolds. Nonetheless, adverse effects can be controlled when the exposure temperature is reduced and the exposure time is increased.

Sterilisation using 0.1-2.5% of peracetic acid, followed by rinsing and neutralisation, has been proposed as an alternative method to avoid denaturation issues associated with g and e-beam irradiation. Peracetic acid is an efficient method to disinfect collagen-based materials and to inactivate virus, with similar efficacy to g-irradiation. Additionally, peracetic acid treatment induces only mild structural changes (slightly loosed collagen fibril pattern and increasing pore size), while preserving gas permeability and tensile strength. In addition, no cytotoxic effects have been reported for tendon grafts sterilised using 0.1% peracetic acid. Finally, it is worth pointing out that peracetic acid has been successfully used as a decellularisation method.

Ethanol sterilisation is a common and simple method for collagen-based materials before in vitro and in vivo experiments. However, its efficacy in reducing or eliminating viable microorganisms is only moderate. The ethanol concentration and exposure time depend on the device type: reconstituted collagen forms are immersed in 70% ethanol for less than an hour, while tissue grafts are immersed in gradual increasing ethanol concentrations from 20-75% for periods of time ranging from four to 24 hours. Following ethanol incubation, devices must be rinsed extensively to remove any potential residue. Ethanol sterilisation, although it induces mild structural changes, does not alter collagen integrity, osteoinduction capacity, denaturation temperature, mechanical properties or enzymatic resistance.

Collagen-based devices have been shown to be efficiently sterilised using different physical and chemical treatments. However, there is no gold standard sterilisation method for collagenous devices. Although physical methods may induce beneficial effects, such as increasing the exposure of RGD sequence on the device surface, they are connected with degradation phenomena and may severely compromise the stability of thin materials. In contrast, chemical methods mildly alter collagen stability and scaffold structure; however, they are often associated with toxicity issues that may be reduced with appropriate processing parameters and quality control measures. g-irradiation and ethylene oxide sterilisation methods will continue to be the methods of choice in an industrial setting, followed by plasma gas and e-beam irradiation for special cases. Ethanol sterilisation will continue as the preferred method in the research field due to its simplicity. Radioprotectant treatments are a promising strategy to reduce degradation issues and to control mechanical and enzymatic stability of collagen-based devices; however, they will not be implemented in the short term, as more research is needed with regard to the in vitro and in vivo host response.

The next generation of medical devices is expected to challenge the sterilisation industry, imposing the development of more effective methods. Experimental design should consider the following features for each device and the intended clinical application:
(a) sterilisation method efficiency;
(b) structural analysis; (c) device stability – denaturation temperature and enzymatic and mechanical stability;
(d) stability during storage; (e) in vitro and in vivo analysis to assess toxicity and influence on host response.