High-speed assembly solutions have revolutionised medical device manufacturing, with the move to automation facilitating very high-volume orders. However, as flexibility becomes more important, manufacturers are seeking solutions that can quickly respond to modifications. Mike Wilson, chairman of the British Automation and Robot Association, explains how robots are changing the face of medical device production lines. 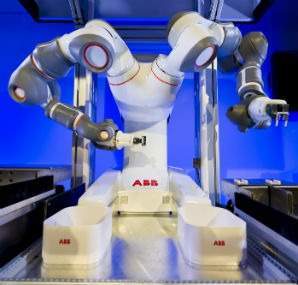 It belongs more in a science fiction film than on a production line: a dual-arm robot that can work together with people on exactly the same tasks. With no need for a safety cage, YuMi can see where it’s going, feel what it’s touching, and deftly navigate its human co-workers. When it commercially launches in April 2015, this team-spirited creation by ABB Robotics will be the world’s first collaborative robot.

To begin with, YuMi – short for ‘you and me’ – will find application in the consumer electronics industry, but it is slated to expand to other market sectors too. Its dexterity, flexibility and agility mean it is particularly suited to small parts assembly; in fact, it can perform with sufficient accuracy to thread a needle.

While it may take some time before the medical devices industry sees the benefits, robots of this kind seem poised to change the face of automation. For many years, the ‘medtech’ sector made little use of robotics, preferring to stick with the dedicated equipment suited to high volumes of identical parts. But old practices are beginning to shift. Today’s manufacturers require more flexibility than ever before, and are finding that traditional solutions aren’t quite up to scratch.

Foot on the accelerator

"Across all manufacturing sectors, the design life of the product is becoming shorter," says Mike Wilson, chairman of the British Automation and Robot Association. "Certainly the speed of the robots has increased and their costs have come down, making it easier and more cost-effective to use robots than to build a bespoke piece of machinery."

Wilson discussed robots two years ago in this very publication. Since then, robotics have made further inroads into the industry. While their uses in, say, the automotive sector have never been in doubt, robots were historically viewed as an overly complex way to automate medical device production.

These days, it appears a tipping point has been reached. As YuMi demonstrates, robots are becoming increasingly user-friendly, and automation is beginning to seem attractive even at low order volumes. Because flexible automation can be integrated into existing equipment, large and small companies alike now have the means to incorporate robotics into their systems.

Of course, conventional automation solutions are still the best option in many cases. A dedicated line is difficult to surpass in terms of speed and productivity: because it has been tailored specifically toward a particular product or part, it guarantees high production rates and reliable quality. This allows original equipment manufacturers (OEMs) to offer complete verification on their products with minimal manpower.

"For the very high-volume end of the business, where you don’t need flexibility, it may be more cost-effective to develop a dedicated automation machine because it can be designed to manufacture the parts very efficiently," explains Wilson. "Robots tend to be used where you need more flexibility, so it might be lower volume runs. It tends to be a case where someone would look at either approach and decide which is the most appropriate."

On the flip side, traditional automation equipment can be expensive and does not lend itself easily to changes in product design. As products develop, and smaller batch sizes are required, it may be necessary to run different parts through the same production line. Robots, which can swiftly respond to modifications, are ideally suited to the task in hand.

Take the example of a contract manufacturer working with an OEM to develop a new medical device. The OEM may well change its original design midway through, in which case the contract manufacturer needs a flexible solution. A robot can be quickly disassembled and reassembled, its configuration tweaked to suit the new design without affecting the product’s time to market.

"By taking this approach, you lose a lot of the risk in the design of the machine," says Wilson. "If you design something bespoke, you don’t know if it’s going to work until you put it all together and run it, and it can be expensive to modify the mechanical elements. If you build your product round robots, they can cost a little more in terms of the hardware that you’re buying, but because the programming is in software they’re a lot easier to modify. The overall cost of the system is lower."

Within medical devices, robotic systems are most commonly used in two key areas: for polishing orthopaedic joints such as knees and hips, and for packaging the finished product.

Orthopaedic joints have been reliant on robots for quite some time. Due to requiring a very smooth finish, with no irregularities, they must be laboriously buffed and polished. This process can take about 45-90 minutes if done by hand, but drops to eight minutes with a six-axis robot.

These robots have an inbuilt force control capacity, meaning they can sense the amount of force they’re applying and change their programming automatically. While this technology costs more than a standard robot, there is a trade-off to be made between the cost of the hardware and how long it takes to implement.

Ahead of the pack

Meanwhile, packing systems are reliant on robots because packaging is notoriously subject to change. Unlike the product itself, it does not need to go through a stringent approvals process, meaning there may be several redesigns.

"Robots are often easier to apply in packaging systems than, let’s say, more dedicated pieces of kit," says Wilson. "They’re an effective solution because of the speeds at which they can operate. We use robots designed for very high-speed packing that are mounted over the production line, so you can pack at something like 150 parts a minute with one robot.

"We also have integrated beam systems, allowing you to identify where the parts are on the conveyor. An example of that would be putting syringes onto a conveyor to be individually packed, along with the little bottles of drug material. The bottles are already oriented as they come down the conveyor line but the syringes are completely randomly positioned. The vision systems identify their position and orientation, and the robots pick them up and place them adjacent to each bottle in the conveyor that takes them onto the packing machine."

While keen to extol their virtues, Wilson does not have any examples of medical devices produced through robotics end-to-end. It’s more a question of robots being incorporated into an existing production line, giving manufacturers the best of both worlds.

"Something like suture manufacture has been done as a combination," he says. "If you’re looking at operations where you only need to move in one or two directions, you can build very high-speed machinery from more dedicated devices, buying the basic components and bolting them together. But if you need more dexterity to be able to orient things, then a robot is more cost-effective. And I’ve seen sutures done using systems that combine robots with more dedicated automation."

Ultimately, the optimal solution will depend on the design of the product and the budget of the manufacturer. In any given instance, the most cost-effective answer may be full automation, partial automation or no automation at all. The type of automation is just another question in the mix.

Whatever you choose, it’s important to have options, especially at the early stages of product development. If you’re developing a small, specialised device with low initial production volumes, you won’t want to spend too much until the device hits the market. With flexible or scalable automation systems, you may pay more initially, but won’t require as much reinvestment further down the line.

Wilson believes that, if we want to see how robots are likely to progress in future, we should look at other industries that may be a few years ahead. As robots speed up and come down in price, they’re becoming ever more appropriate for applications that once required a dedicated piece of kit.

"We can use an example in the car industry," he says. "Twenty years ago, car production lines had conveyors that moved the car bodies between robots that were carrying the spot-welding guns, and the way they’re done now is that the robots actually move the parts. So much less part-handling is being done, by much more-dedicated equipment. There are two reasons for that: one is that they want flexibility, but the other is that the cost and performance of the robots have changed so significantly that it’s easier to consider doing it that way.

"I think we will see the same kinds of things happen in medical device manufacture where people start building systems around robots, rather than robots around other bits of equipment. Slowly but surely there’ll be fewer dedicated pieces of equipment, and people will use more robots."

The shift may be more incremental than seismic; however, with the likes of YuMi now fast approaching its launch date, it seems clear that tomorrow’s assembly systems will be more flexible than ever before. Whether you need high volumes of long-lasting products, or short runs of prototype designs, medical device production lines are changing. Robots are taking over the sector by stealth.