High-performance processors enable continuous improvement in many sectors, including the medical device market. Zeljko Loncaric, marketing engineer at congatec, explains how microprocessor evolution is driving up efficacy within the industry. 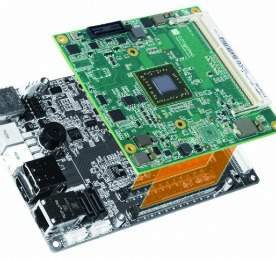 The driving force behind microprocessor development has, for decades, primarily been the needs of the IT sector and personal computing. The road map provided by leading manufacturers has guaranteed allegiance to a common architecture – support that has been beneficial to all.

As the needs of traditional applications broadened, processor manufacturers responded by extending and enhancing
the core architecture while retaining code compatibility, allowing easy migration as more powerful solutions became available. As the capabilities and functionalities evolved, however, one parameter above all others had to be preserved: increased performance. As a result of constant performance improvements over the last decade or so, these same processors have slowly, but inexorably, migrated to other applications, delivering a level of performance that now enables many established and emerging applications.

More recently, the need to deliver that performance within tighter power budgets has become apparent. The cost of greater performance has traditionally been increased power, but as integrated circuits became more power-hungry, their ability to dissipate the subsequent heat diminished. The performance they could provide was becoming physically limited by the power needed to deliver it – a trend that was unsustainable. In a bid to overcome this impending roadblock, processor manufacturers had to radically re-engineer their fundamental manufacturing processes; a difficult challenge, but one that has ultimately resulted in even greater architectural innovations, each one widening the sphere of application potential.

The medical sector is one of many fields that has benefitted from processor innovations and greater focus on the particular requirements of the embedded market. Subsequently, many of the features to which people have become accustomed in one market are being made available in others, providing the same productivity gains and improved user experiences.

Medical devices are predominantly designed to be unifunctional: to perform one task very well. Their ability to perform that task – the efficacy of the device – can be measured by the quality of the results. In healthcare there is no such thing as ‘good enough’; when it comes to diagnosis or healthcare administration, there is always room for improvement.

Improvement comes in many forms; it may be a simpler control system, a smaller format or fewer stages before results are obtained, or, most likely, greater accuracy of those results. The aforementioned all have one thing in common: the need for greater levels of processing performance. By being able to integrate more processing performance into a smaller and lower-power solution, medical device manufacturers are empowered to continuously improve their products.

"By being able to integrate more processing performance into a smaller, lower-power solution, medical device manufacturers are empowered to continuously improve their products."

One of the ways greater performance can deliver overall improvement is in the addition and consolidation of functions. The ability of modern processors to perform multiple functions simultaneously is a direct result of the emergence of multicore processing and virtualisation technology.

Multicore (or distributed) processing isn’t actually new; the very first computers needed more performance than a single processing unit was able to deliver and so processing tasks were distributed across multiple devices. As the power/performance pinch-point became apparent, this technique was revived as a way of distributing not so much the processing performance, but the power needed to achieve it. By integrating multiple processing cores in a single device, each core was able to run more slowly, thereby dissipating less localised heat.

While initially difficult to program, most modern programs and, more specifically, operating systems are multicore-aware, allowing the software to make full use of the available processing resources. This allows many functions to be consolidated by a single device, or new functions to be added without adding processing power.

Another technique, known as virtualisation, allows a multicore to behave like a few ethernet-connected singlecore devices, thereby enabling critical or real-time functions to be executed at an isolated, dedicated core. One core might use a real-time Linux OS and run the data capturing, a second core might be used to run the Windows user interface and another might run standard Linux, providing the firewall functionality.

In medical devices, this translates to greater capability in unifunction devices, thereby raising the overall efficiency of the equipment. What may have once required several processors to work together can now be accomplished on a single platform that runs more sophisticated software with greater efficiency.

Another major trend across all markets in the embedded space is the evolution of the user interface. Far from being a simple gimmick, user interfaces (UIs)are an important part of product development with entire teams devoted to creating the right solution.

The reason for this is the massive productivity gains a good UI can deliver; something as simple as support for multiple languages or different font sizes can influence the overall efficiency of any device – a factor that is perhaps even more crucial in a medical environment.

User interfaces today invariably comprise a high-resolution display and a multitouch interface, features that would have until recently required dedicated devices. Many of the latest microprocessors, however, are now able to directly support sophisticated user interfaces through either dedicated hardware blocks closely coupled to the central processor, or dedicated interfaces connected to high-speed processor buses and external drivers.

"The ability to provide faster image manipulation at higher resolutions has become fundamental to medical care; user expectation is that a screen will be high-resolution and interactive."

Microprocessors have always been well equipped to drive displays, and as the resolution of display technology has increased so, too, has the ability of microprocessors to make best use of that resolution. This is a feature that can directly improve medical equipment in terms of imaging applications, such as ultrasound equipment, and even MRI and CT scanners.

The ability to provide faster image manipulation at higher resolutions has become fundamental to all aspects of medical care. The general trend within microprocessor design is to add greater graphics capabilities with every new generation, an aspect that is parallel to the development of multicore architectures.

In general, the functional units dedicated to graphic processing operate autonomously to the central processing unit(s) and therefore deliver dedicated performance, largely irrespective of the workload on the main architecture.

Most processor manufacturers have adopted a graphics-centric approach to architecture design, predominantly because of its universal appeal. Demand for a better user experience is driven by a commonality of intuitive design; user expectation is that a screen will be high-resolution and interactive. Bringing those features to medical devices makes equipment more intuitive and simpler to operate, thereby improving not only the user experience for the medical professional, but also overall patient care.

This trend to integrate more graphics capability has further benefits in the medical sector. Graphics processing units are fundamentally very powerful coprocessors that run in parallel to each other and the main processor. As a result, they can, in principle, be applied to any massively parallel data processing tasks.

Using graphical processing units for general purpose tasks is an emerging trend that has become known simply as GPGPU. Medical imaging equipment generates vast amounts of data, all of which needs to be processed, so GPGPU is particularly applicable in this application.

GPGPU is enabled by a number of open source software projects, such as OpenGL and OpenCL, which allow algorithms to be ported to practically any processing architecture; this is important because graphics processors are typically designed for maximum performance at the cost of architectural continuity. The OpenCL project uses a level of abstraction that allows algorithms to be ported to any architecture that supports the language, and it has rapidly become the default approach for GPGPU.

Using GPGPU in medical applications makes sense because it allows data that is easily parallelised to be processed in a more efficient flow. Established processor architectures, even multicore processors, are typically executing software written in C, which doesn’t inherently support parallelism. While many tasks can be executed simultaneously – even the same task – GPGPU is better suited to raw data crunching. This increased throughput can have a direct impact on the efficacy of medical imaging equipment or any device that relies on the real-time processing of raw data as it is acquired

Many processors, such as AMD’s latest x86-based embedded G-series processors, go so far as to combine the CPU and GPU elements in an architecturally optimised format, which it calls accelerated processing units (APUs).

These power or performance-optimised processors are able to deliver unprecedented levels of processing performance while dissipating extremely low power levels, which means they are able to operate in a fanless environment and even in hermetically sealed equipment, ideal for the demanding conditions often associated with medical devices, which
can require regular and extensive sterilisation.

However, the real value of a medical device isn’t in its integration of general purpose processors and subsystems; it is in the results it delivers.

Integrating a high-performance x86 processor is also challenging for engineers unfamiliar with such devices, requiring a level of knowledge of the architecture that can take many work-hours to acquire. Predominantly, engineers would need a fairly standard processor and subsystem upon which to base their device and it is here where the trend for computer-on-module can deliver.

Computer-on-module (COM) is a format that is widely used in many vertical sectors, including medical. It provides a standard platform that is inherently upgradeable as higher-performance processors become available, but equally flexible in moving to more power-efficient platforms if an OEM needs to retarget a device for, say, the portable medical device market.

The AMD embedded G-series system-on-chip (SOC) is available in dual and quad-core variants and congatec has used this powerful platform to develop its type 6 COM express compact conga-TCG family. The SOC integrates AMD Radeon graphics processors to deliver several Gflops of processing power, while the dual-core version dissipates as little as 9W and the quad-core just 25W.

Through a COM approach to medical device development, OEMs have access to a proven, high-performance processing platform that has an inherent migration path, backed by the assurance of five-plus-two-years’ continuity of supply. A modular approach to design also simplifies the certification process for product variants, giving manufacturers an even greater commercial advantage.