One in ten people will develop bowel cancer, and many won’t know they have the disease until it’s too late to cure. Chris Godfrey speaks with Jonathan Cooper of the University of Glasgow to see how lab-on-a-chip technology could save lives by providing quicker, more-accurate diagnoses than current screening methods. 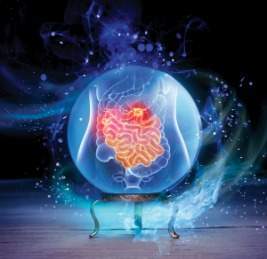 The best way to beat cancer is to catch it early. When access to cancer screening services is dependent upon geography, cost and national health services, though, it’s rarely that simple. Not every clinic has the resources to offer everyone optimal diagnostics, and the ages at which certain cancers are screened and the methods used vary from country to country. Whether or not malignant growths are found in time is often something of a lottery, but it’s one that technology may soon eradicate.

When Jonathan Cooper joined the University of Glasgow more than two decades ago, biosensor technology was in its infancy. Biomedical devices were almost exclusively used for the detection of pregnancy and glucose (for the management of diabetes) and activities like cancer screening were conducted predominantly through diagnostic agents, like X-ray scans, or instrumentation, such as microscopes.

Now, mirroring the evolution and ergonomic direction of computers, biomedical diagnostic equipment has miniaturised, becoming cheaper and more integrated along the way. The proliferation of lab-on-a-chip technology and development of micro-fluidic technology means that soon diagnostic tests may no longer be restricted by factors such as location or cost.

"Take smartphones," says Cooper, an expert in biomedical engineering and a Fellow of the Royal Society of Edinburgh and the Royal Academy of Engineering. "These aren’t just for voice-calls anymore, but are complex systems that are able to be used for data communication. They also take pictures, updates diaries, and so on.

Much of this processing power is achieved through miniaturisation and integration. Similarly, by making devices smaller, the time taken for biological reactions to come into equilibrium is a lot faster. As is the case with electronics, as devices become smaller, they also become cheaper."

Historically, diagnostic technology has been instrument-based, and often confined to bench-tops. Now, with the advent of cheaper equipment manufactured from glass, and with electronics companies getting in on the action and establishing life science divisions, the sector is increasingly reliant on biosensor, chip-based technology. Along the way it’s revolutionised the way bowel cancer is detected.

Physicians consider two aspects when testing for cancer: screening and diagnosis. Breast cancer screening is largely by checking manually for lumps, and where necessary, imaging technology is used. As the cancer is external to the body, screening and diagnosis can be carried out relatively easily, and many anomalous growths are initially noticed by patients self-examining.

Bowel cancer is internal, however, and so detection is heavily reliant on individuals noticing symptoms and proxies of the disease, such as blood within faeces. Doctors can then conduct a colonoscopy to provide a more accurate diagnosis, but even then it’s an invasive process with associated risks. For many bowel cancer patients, recognising and acting upon these proxies will be their best chance of survival.

"An over-the-counter device that takes the user from sample to diagnosis in a matter of minutes could be just the convenient, anonymous process that a certain demographic needs."

"Clinical screening occurs at a particular age, which is selected by individual countries," says Cooper. "Deciding what that age may be is driven by financial issues, rather than clinical. You’ll notice there’s a difference between Scotland and England. Clinical advice, which usually suggests screening as early as possible, recommends that screening for bowel cancer should take place from 40 onwards, whereas in Scotland it starts at 50 and in England at 60."

Cooper suggests that, on the back of this alone, there’s a commercial case for offering an over-the-counter device that gives people the opportunity to self-test at an earlier stage, rather than rely on the intervention of the National Health Service later on. There’s certainly room for a product that can produce a diagnosis faster, cheaper and with greater accuracy than current methods.

"The way that screening is performed at the moment is by an optical test, which involves taking a smear of your faeces, putting them on a card sending them to a reference lab," says Cooper. "This is an optical test, and because the sample is dark, it may be difficult to identify colour changes on the card, as these may be obscured, or changed by the nature of the sample.

"When using an optical test you have scattering, or absorption of any signal by the actual mass of the faeces. The advantage of an electronic test is that you have to take in the presence of blood via a change that occurs in the electric characteristics of the sample. If blood is present, the sensor detects it and a current flows within the circuit as a consequence."

An individual’s faeces will change daily according to diet, age, health, hydration and amount of exercise. The resting time within the gut is also important – the shorter each phase between bowel movements, the less opportunity there is for blood to accumulate in the faeces. In order to give an accurate diagnosis, medical professionals have to take into account the huge range of different samples and compositions.

Without having to make a judgement on the wateriness, colour or any other variables associated with a faeces sample, lab-on-a-chip devices can provide a far more accurate diagnosis than traditional methods. The ‘measure’ device, from MODE, is a digital monitoring test that helps users screen for bowel cancer.

It looks for gastrointestinal bleeding – often an early symptom of various diseases, including bowel cancer. While it eliminates the need for samples to be sent off to labs for testing, it operates in much the same way as traditional screening methods.

"You could argue that neither we nor the NHS are measuring specifically whether you have cancer or not, we’re measuring a proxy that is an indication of an increased probability of having cancer," says Cooper.

"In both cases, the outcome of a positive test is that be you’ll be brought in by the NHS for a different test, probably a colonoscopy, and an internal examination would be made."

While it’s likely that Cooper’s electronic device is more accurate, its cost effectiveness is debatable. "It’s a simple question – which is cheaper – but it’s a complex answer. It depends who’s paying, how you look at the actual cost and how far down the chain you go," he explains.

In most cases, traditional screening methods are provided for free by a country’s health service. However, should a patient opt for the electronic device, they would have to pay for it themselves. The cost still exists, but it’s shifted from health services to patients.

"The second issue to consider when judging cost-effectiveness is the value of the sensor," says Cooper. "Though it may cost more than the piece of card that the NHS would use, our test provides the answer almost instantly. With the traditional method, the sample is sent off to a reference lab for tests, and there’s the whole infrastructure around that, which incurs additional costs. It’s difficult to compare costs, as different people are paying then, and they are incurred in different places."

One of the main benefits of the electronic device is that it helps overcome the stigma and apprehension associated with providing stool samples. "It’s a little like saliva: it’s an easy sample to take, but some people are still reluctant to do it," says Cooper, "such as those who are concerned about their health, or are aware of a family history of disease, or who just fully understand the benefit of screening.

"There’s resistance in other populations, though, who see it as something they don’t want to do."

The ability to buy an over-the-counter device that takes the user from sample to diagnosis in a matter of minutes could be just the convenient, anonymous process this latter demographic needs.

Lab-on-a-chip devices may never entirely replace traditional screening services, but they certainly offer viable alternatives. As third most common type of cancer (after breast and lung), with one in ten people expected to develop bowel cancer over their lifetime, the more options available for screening, the more likely it is they’ll receive an early diagnosis – drastically increasing their chances of survival.