The ReWalk motorised exoskeleton, designed to help paralysed patients walk again, recently earned FDA approval for personal use. Human movement specialist Dr Mukul Talaty from Moss Rehab speaks to Natalie Healey about the safety and performance of the product, and whether these robotic suits represent the future of spinal cord injury treatment. 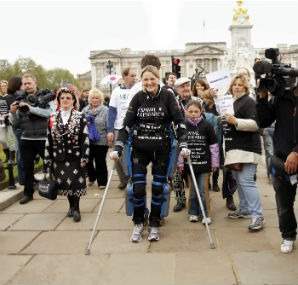 After the breaks failed on his rented ATV in 1997, Israeli inventor Dr Amit Goffer was paralysed from the neck down.

After nine long months in hospital following the accident, Goffer began to question the archaic nature of spinal cord injury (SCI) management. Why was the wheelchair still presented as the only option for those who’d lost the use of their legs? And why hadn’t it evolved much since 500CE, when images of the device began to appear in Chinese art?

Determined to build something better, Goffer combined his electrical engineering skills and new-found knowledge of SCI to develop a prototype for a novel contraption. The resulting prototype was rather clunky, but nevertheless extraordinary: a motorised exoskeleton that would allow paralysed people to walk again.

Goffer christened his product the ReWalk and founded Argo Medical Technologies in 2001. Then a small R&D start up, Argo grew to be an international organisation with headquarters in Israel, the US and Germany. The company arrived on the stock market in September and now trades under the name ReWalk Robotics.

The ReWalk made UK headlines in 2012 when paralysed Claire Lomas completed the London Marathon in 17 days using the device. And a few months ago, the product was approved for home and public use by FDA. It’s a big deal for Goffer and his company – as the ReWalk is the first and only exoskeleton that people in the US can actually buy for personal use.

History in the making

"I remember reading about Professor Wangenstein, who, back in the late 1800s, had a vision of a wheelchair that could transform into the standing frame and would allow autonomous walking," says Dr Mukul Talaty, a researcher at Moss Rehab. "Really he was describing ReWalk. I think the fact that this was proposed over 100 years ago speaks for the fact that we’ve been ready for this type of technology for quite some time. Much kudos to Amit Goffer for finally putting it together, and saying: ‘we can do better than a wheelchair. Let’s try this’."

Talaty works in the rehabilitation hospital’s gait and motion analysis laboratory, where human movement is studied. His research has been looking at the function of prosthetic and orthotic devices, how they work, and how scientists and engineers can make them perform better. He has a good grasp of Goffer’s invention because he’s been working with the ReWalk to determine the safety and efficacy of the product since 2009.

Despite the device’s sci-fi appearance, the mechanism behind the ReWalk is actually rather simple. A metallic frame provides the structure and it’s strapped onto the body with Velcro straps and worn on top of clothing. Electric motors are located on the knees and the hips on both sides, while the ankles are free – resting on a foot plate. The product’s computer system and battery is contained in a backpack and will provide three to four hours of uninterrupted walking time before charging is required.

"ReWalk’s completely unlike anything we’ve ever tested before," reveals Talaty. "This is ironic, because it’s hardly groundbreaking in terms of technology."

Though not particularly high-tech, one remarkable feature is that users actually independently control their own performance. The wrist-watch style communicator allows them to select the system mode; a simple tilt sensor, located around shoulder level, then allows subjects to ‘tell’ the device when they want to take a step. As the wearer tilts their body, sensors on the equipment translate that shift into a step and allow the user to move forward.

ReWalk’s design isn’t suitable for all SCI patients, though, because it is fundamentally unbalanced. The motorised exoskeleton therefore requires additional forearm crutches to steady the user. It’s not appropriate for patients without good control of their arms, so unfortunately, as a quadriplegic, Goffer cannot yet make use of his own invention.

"The ReWalk requirements include having sufficient bone density to stand and walk, blood pressure that is suitable, height between 5ft 2in and 6ft 3in, weight less than 220lb and an ability to judge walking conditions around you," says ReWalk’s CEO Larry Jasinski, who joined the company in 2012.

The ReWalk found its way into Talaty’s research when his laboratory director Albert Esquenazi was introduced to the device at a conference in Israel. Goffer’s company was looking to move into the US market and collaborating with an American gait rehabilitation centre with an active research and clinical function seemed a perfect fit.

The Moss research team’s goal was, first and foremost, to establish the safety of subjects in the device, before assessing their performance; 12 thoracic motor-complete SCI patients were chosen to take part in the trial which for each subject lasted for two months and consisted of one to two hour-long training sessions three times a week.

For subjects used to being seated predominantly, standing for the first time would doubtless be a big shock. Talaty explains that one important neurological issue the researchers were looking out for was autonomic dysreflexia. It occurs in patients with motor complete injury where noxious stimulus causes the sudden onset of severe high blood pressure.

"It can be very detrimental. The patients could pass out or fall or experience even more dangerous complications from that sort of episode. So we were watchful of that," he reveals.

Thankfully nothing like that happened. There were no falls recorded, and the most severe reactions to learning to use the exoskeleton were mild-chafing and pressure sores on the skin from the device’s pads and a bit of light-headedness – nothing that couldn’t be treated with a little bit of foam padding, rest and caffeine.

After safety was established, the next step was to see how patients actually performed in the device. Incredibly, after a little bit of training, each and every wheelchair-bound participant was able to get up and use the ReWalk to walk across the room. It was a big moment for all of them.

"Most of our subjects were moved to tears to be able to get up and walk around under their own power. Because quite frankly, the options everybody has been given when they suffer an injury like this is ‘get used to being in a wheelchair, because you will be in one for the rest of your life,’" says Talaty.

He admits walking speed varied from participant to participant (ranging from a rather slow 0.03 to an impressive 0.45m/s). But the majority of subjects achieved a level of proficiency close to that needed for limited community ambulation.

At the end of the trial, the team conducted subjective checks to assess participants’ experiences of the study. The reaction was overwhelmingly positive, and a number of subjects said they felt their overall health was better, Talaty reveals.

There are ongoing long-term trials at other institutions, which will give a more evidence-based approach to figuring out whether various health conditions of SCI patients are improved by being upright. At the Center of Excellence on the Medical Consequences of Spinal Cord Injury at the US Department of Veterans Affairs for example, associate director Dr Ann Spungen is assessing the effects of using the exoskeleton on strength and sensation below the spinal injury, blood pressure and cardiovascular regulation, and bowel/bladder function.

"It is easy to see the value of walking in terms of mobility, quality of life and many little things that are regained by a user from these systems. When we ask the users about the benefits, the phrase we often hear is that it is ‘more than walking’," reveals Jasinski. "They cite taking less medication for pain, improved core strength, better GI and GU function, loss of fat tissue, gain of lean tissue and general overall health improvements. It seems walking is good for anyone – especially those with a spinal cord injury."

But perhaps understandably Talaty’s study identified some limitations with Goffer’s brainchild. For one, he noticed the type of terrain affected the ease of using the device. The best surface for ReWalk practice is one that’s pretty flat.

"It would be difficult on grass or on rocky terrain," he says. "Certainly anything that wasn’t close to smooth would present a challenge to users."

And while the ReWalk is designed to cope well with stairs, Talaty revealed they too proved tricky for his subjects. "Perhaps the stairs in Israel are a little bit shorter than here in the US," he ponders.

Limitations aside, Talaty believes exoskeletons represent an exciting part of the future for SCI patients. They’re a useful additive element to wheelchair use and both devices complement each other for specific situations. And scientific data aside, the psychological effect of upright movements should not be underestimated.

Devices like ReWalk will become more common, and increased competition will ultimately enable better products, with improved algorithms and more streamlined structures. But Talaty doesn’t think SCI options will stop at motorised exoskeletons. With stem cell research a big priority for the scientific community, soon, this increased regenerative medicine knowledge could make the journey from bench to bedside.

"It seems likely that sometime in the next couple of decades, we’re going to make that connection between the level above the injury where things work, and the level below where they don’t," says Talaty. "I think soon you’ll have the ability to use the physiological structures that are currently just sitting there dormant."

If stem cell therapy could repair SCI in the future, motorised exoskeletons would obviously become less important, but until we get there, Talaty believes they could help prepare patients for when this holy grail of treatments finally does grace clinics.

"Motorised exoskeletons offer these people a chance to interact and return to the workplace in capacities they couldn’t before, and could keep those structures below the injury more ready, because it’s providing loading," he says. "So when we do get to a point where regenerative medicine may be a more important factor, these people will be ready to go."