Evonik - We boost the next generation of biomaterials for your medical devices to improve the quality of life.

Evonik and Samaplast expand the performance spectrum of plastic implants

Darmstadt, Germany. The specialty chemicals company Evonik and the Swiss plastics specialist Samaplast are combining their expertise in the development of an osteoconductive PEEK biomaterial for injection molding. As part of the collaboration, both partners are demonstrating and documenting the outstanding processing properties of the new osteoconductive high-performance polymer VESTAKEEP® Fusion using the first prototypes of spinal implants.

Until now, it has been virtually impossible to manufacture implants from polymer compounds with bioactive particles by injection molding, because a thin polymer layer usually forms on the surface that overlays the particles, preventing the implant from growing in. But with VESTAKEEP® Fusion, the functional BCP additives (biphasic calcium phosphate) are also available on the surface of injection-molded components. This is ensured by the specially configured microparticles and their homogeneous distribution.

“Implant manufacturers were missing a PEEK material that fuse with bone cells and thus accelerates healing, for example after spinal surgery,” says Marc Knebel, Head of the Medical Systems Market Segment at Evonik. “We are closing this gap in the market with VESTAKEEP® Fusion and offering an alternative to titanium, stainless steel or cobalt-chromium implants right away.”

VESTAKEEP® Fusion was developed with a goal to process in different manufacturing technologies and is initially offered as granules and semi-finished products. It can be milled, compression molded, extruded-and even injection molded. For the latter, Evonik has optimized the compound in close cooperation with Samaplast AG.

“We tested VESTAKEEP® Fusion on injection molding machines in the clean room and found that it was very easy to process,” confirms Samaplast CEO Stefan Okle. “Thanks to the excellent exchange with Evonik, we were able to produce a prototype within ten days.” Previously, tool development alone had taken eight to ten weeks. With rapid prototyping, this process can be shortened considerably.

Evonik and Samaplast are demonstrating what is possible with the first prototypes of intervertebral implants, known as cages or spacers, which are used to fill the disc space in the spine following its removal due to disc degeneration. “We have produced a cage that contains all the details, such as serrations, threads, and apertures, that are relevant for spinal implants,” explains Okle.

Thanks to the design freedom in injection molding of VESTAKEEP® Fusion, specific cage variants can be produced – tailored to the anatomical conditions and different surgical techniques such as PLIF, TLIF and ALIF. The cage models show the design diversity in the interlocks and in the cavities for ossification. In addition, the design facilitates instrument guidance during surgery and also enables minimally invasive, patient-friendly surgical techniques.

With VESTAKEEP® Fusion, Evonik is introducing a new product line of next-generation PEEK-based implant materials. The osteoconductive properties of the new PEEK material were achieved by using a special functional additive – biphasic calcium phosphate – and allow bone cells to adhere to implants more quickly, thus positively influencing fusion, so called osteointegration, at the boundary between the bone and the implant. This, in turn, will accelerate bone fusion and convalescence.

Evonik will present the VESTAKEEP® Fusion biomaterial during the EUROSPINE trade show in Vienna, Austria (October 6-8, 2021) at the Booth 42. 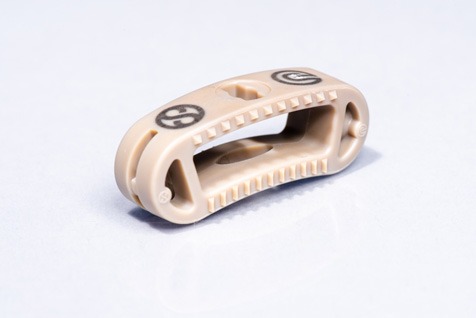 Contact Evonik - We boost the next generation of biomaterials for your medical devices to improve the quality of life.

Evonik - We boost the next generation of biomaterials for your medical devices to improve the quality of life.

Darmstadt, Germany. Evonik is further expanding its portfolio of 3D-printable...