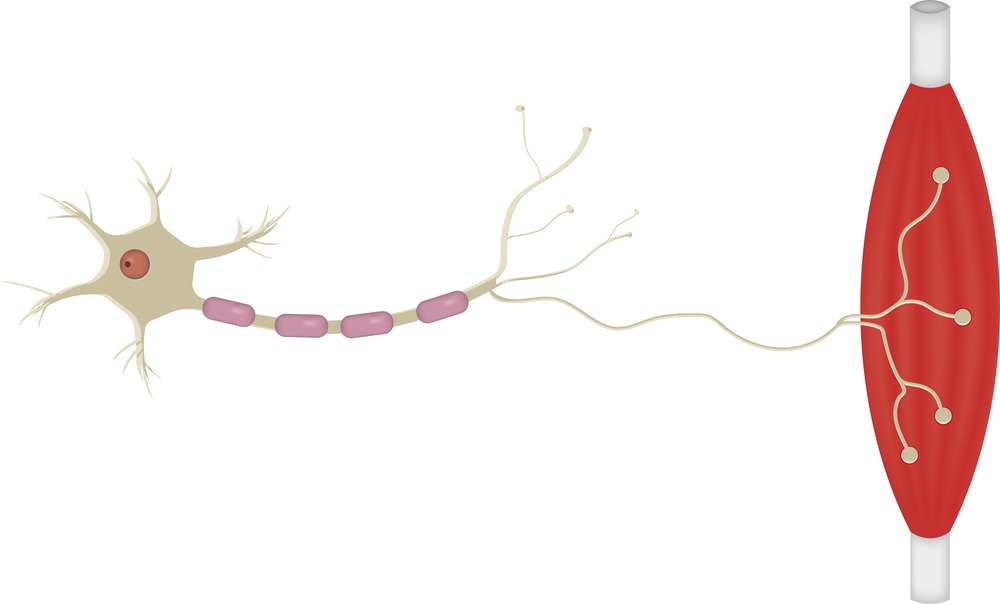 An illustration of the link between a motor neurone and a muscle (Credit: Shutterstock/joshya)

As advances in engineering result in smaller and smaller devices, sensors that are inconspicuous and give insights into the progression and treatment effects for neuromuscular diseases could become a reality.

Engineers at Tufts University have created and demonstrated flexible thread-based sensors that can measure movement of the neck, providing data on the direction, angle of rotation and degree of displacement of the head.

A study released on January 29 revealed that one of the latest iterations of this technology, coupled with a machine-learning tool that analyses signals from the sensors, had an accuracy of 93% when measuring head and neck movements.

What’s more is that the study’s lead author, Yiwen Jiang, invented the device as an undergraduate.

“This is a promising demonstration of how we could make sensors that monitor our health, performance, and environment in a non-intrusive way,” she said.

“If we can take this technology further, there could be a wide range of applications in healthcare as well.

“For example, those researching Parkinson’s disease and other neuromuscular diseases could also track the movements of subjects in their normal settings and daily lives to gather data on their condition and the effectiveness of treatments.”

The technology, described in Scientific Reports, adds to a growing number of thread-based sensors developed by Tufts engineers that can be woven into textiles, measuring gases and chemicals in the environment or metabolites in sweat.

How the device works

In their experiments, the researchers placed two threads in an X pattern on the back of a subject’s neck.

Coated with an electrically conducting carbon-based ink, the sensors detect motion when the threads bend, creating strain that changes the way they conduct electricity.

When the subject performs a series of head movements, the wires send signals to a small Bluetooth module, which then transmitted data wirelessly to a computer or smartphone for analysis.

The data analysis involves sophisticated machine learning approaches to interpret the signals and quantify them in real time.

In this way, the sensors and processor track motion without interference from wires, bulky devices, or limiting conditions such as the use of cameras, or confinement to a room or lab space.

According to the researchers, these limiting conditions are currently present in other wearable motion sensor designs, which they said tend to include 3-axis gyroscopes, accelerometers and magnetometers to detect the movement of a subject in relation to their surroundings.

These sensors, they explained, are based on inertial measurements – quantifying how the body accelerates, rotates or moves up and down – and tend to be bulkier and more inconvenient.

In many cases it is necessary to place one sensor on the forehead and another on the neck above the vertebrae, and the obtrusive placement of equipment can interfere with the subjects’ free movement or simply the convenience of not being conscious of being measured.

One 2019 review of wearables used to measure gait impairments in sufferer’s of Parkinson’s disease concluded that these devices were “useful, non-invasive, low-cost, and objective tools” for this purpose.

But it could be a while before we see thread-based sensors replace these wearables, however bulky they are, as Jiang and his colleague’s have only proofed the concept for head and neck movements, and said future algorithms will need to be specialised for each location on the body.

On top of this, Jiang wishes to tweak the current invention to reach closer to the 100% accuracy mark.

“More work needs to be done to improve the sensors’ scope and precision, which in this case could mean gathering data from a larger array of threads regularly spaced or arranged in a pattern, and developing algorithms that improve the quantification of articulated movement,” she said.

In the meantime, the head and neck movement tracking device could have applications for safety, detecting when fatigue results in somebody nodding off in situations where tracking operator alertness is critical and alerting them or others.

The ability for her device to use thread-based sweat sensors, described in earlier work by the Tufts team, could also potentially track the electrolytes, lactate and other biological markers of performance in sweat, which could have applications for performance analysis in athletes.