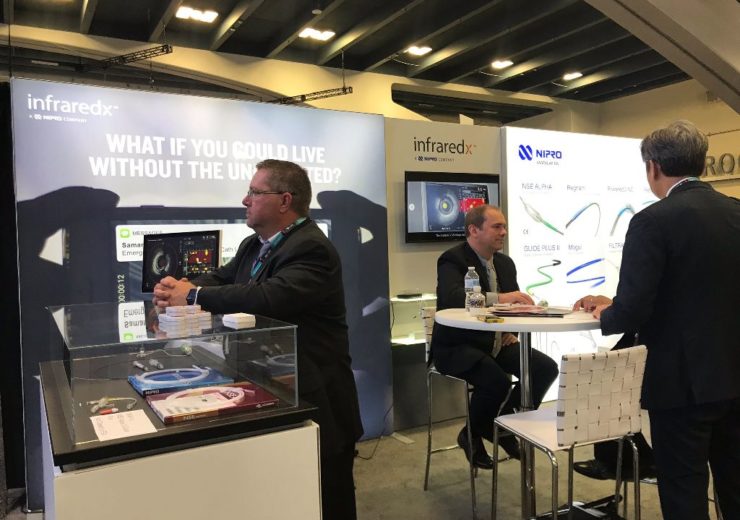 Image: Study shows safety and efficacy of NIRS imaging in patients with risk for MACE. Photo: Courtesy of Infraredx, Inc./Twitter

Despite advances in medical therapy and stenting, coronary artery disease remains the world’s leading cause of death and causes extensive disability.1 The ability to predict which patients or coronary segments will have future events has not been previously available; the LRP study successfully demonstrated the ability of IVUS+ NIRS imaging to prospectively detect vulnerable patients and vulnerable plaques.

In April 2019, due to the positive results from the LRP study data, the FDA expanded the indications for use of the Makoto Intravascular Imaging System to include the identification of patients and plaques at increased risk of MACE. Intravascular NIRS was developed, validated, and labeled for the detection of lipid core plaque (LCP).

The study authors called this the “first study to use the NIRS chemogram [a color-coded map that displays the presence of LCP in yellow and absence in red] to show predictive ability for future NC-MACE, both for the patient and plaque levels.” They added that IVUS+NIRS, “should be considered as a tool to guide patients and lesions at risk for unanticipated subsequent MACE.”

The LRP Study enrolled 1,563 patients at 44 medical centers across the U.S. and Europe, and utilized IVUS+NIRS technology to assess the lipid core burden index (LCBI) in stable and unstable patients requiring an angiogram procedure for new and ongoing cardiac symptoms.

“This positive data further demonstrates the potential for IVUS+NIRS Imaging to be a tool to eventually predict future coronary events,” said Nozomu Fujita, President and CEO of Infraredx, a Nipro Company.

“This data will pave the way for how we diagnose, treat, and manage our high-risk coronary patients,” said Waksman. “This is a very important tool for the field of interventional cardiology, as we now have the ability to identify these patients that could be at risk for future events.”

“The use of imaging in the U.S. is underutilized,” said Gary S. Mintz, M.D., of the Cardiovascular Research Foundation and MedStar Cardiovascular Research Network. “With these new findings, we hope that this will bolster the conversation surrounding the use of imaging during PCI procedures and lead to the better diagnosis and treatment of our high-risk patient populations.”

Infraredx’s Makoto Intravascular Imaging System, with accompanying Dualpro IVUS+NIRS catheter, is the only technology on the market FDA-cleared for the identification of patients and plaques at an increased risk of MACE, and for the detection of LCP. The system utilizes NIRS to detect LCP and automatically displays the results via a simple, color-coded map, called a chemogram. The chemogram allows for the straightforward display of the presence of LCP in yellow and absence in red. The ability to detect LCP in order to stratify at-risk patients will enable cardiologists to make more personalized clinical decisions for their patients.