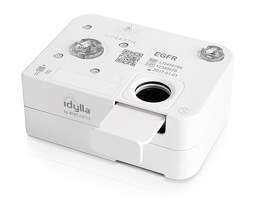 The study showed that Idylla EGFR mutation test produced a result in 80% of the EGFR samples whose assessment was unsuccessful with NGS.

The study concluded that the test is a better alternative to NGS for rapid treatment decisions in patients with acute deterioration, specifically when testing is carried out on a less than optimal tumor tissue sample.

Later, these samples have been retested by directly pipetting the DNA5 into the Idylla™ EGFR Mutation Test cartridge, which showed a 100% concordance with NGS for the valid results, confirming EGFR mutational status.

Idylla processed the sample and adequately produced a result for a large portion of the cases whose NGS assessment was invalid.

“Our data showed that, when clinical decisions should be taken quickly to save time since days have been spent on waiting for an invalid NGS result, Idylla™ can provide a solution.”

Performed on Biocartis’ Idylla system, the Idylla EGFR mutation test (CE-IVD) enables to detect 51 EGFR mutations, which are included in international guidelines for all patients with advanced NSCLC of a non-squamous subtype, directly from only one slice of FFPE tumor tissue.

The test is said to provide results in around .5 hours with less than two minutes hands-on time.

The company is planning to launch fully automated Idylla liquid biopsy ctEGFR mutation assay in the second half of this year.