Australia-based SpeeDx has secured breakthrough device designation from the US Food and Drug Administration (FDA) for its ResistancePlus GC molecular test. 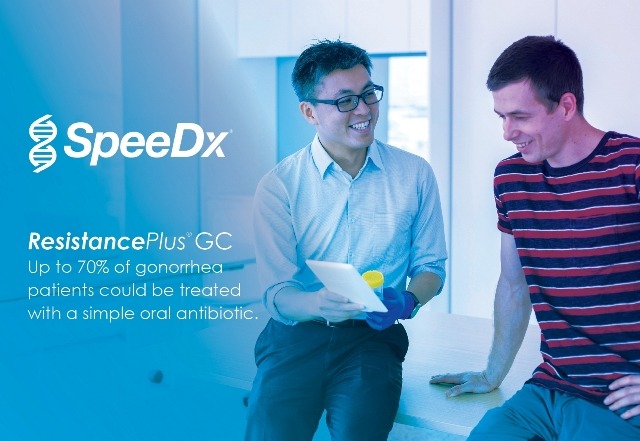 Image: Results from ResistancePlus GC can be used to guide treatment decisions for gonorrhea infections. Photo: courtesy of Business Wire.

The molecular test was already secured CE mark and approved by the Therapeutic Goods Association (TGA) for use across Europe, Australia and New Zealand.

ResistancePlus GC will be used for the detection of both sexually transmitted infection N. gonorrhea and sequences in the gyrA gene of the bacteria associated with susceptibility or resistance to ciprofloxacin, a previously used front-line antibiotic treatment.

Results from the test will help guide treatment decisions for gonorrhea infections, providing doctors and patients the option of using ciprofloxacin instead of ceftriaxone, an antibiotic available for multi-drug resistant infections.

Ceftriaxone, which is a painful intramuscular injection, is the current front-line treatment for gonorrhea.

SpeeDx CEO Colin Denver said: “We are very pleased that the FDA has recognised ResistancePlus GC as an important tool for the ongoing arms race against gonorrhea and rising antibiotic resistance.

“The results from our tests empower clinicians to make better informed treatment decisions, and we are passionate about the responsible use and stewardship of antibiotics to achieve the best possible patient outcomes.”

SpeeDx is also carrying out conducting multi-site clinical trials for the ResistancePlus MG test, in addition to developing antibiotic resistance testing for gonorrhea. It is not yet available for sale in the US.

The molecular test will be used for the detection of rapidly rising STI Mycoplasma genitalium (Mgen) along with genetic markers associated to antibiotic resistance.

Established in 2009, SpeeDx is specialiased in providing molecular diagnostic solutions, which will provide comprehensive information for improved patient management.

The firm’s products serve as multiplex diagnostics for STI, antibiotic resistance markers, and respiratory disease. With offices in London and the US, the company has distributors across Europe.