The Sanitiser Sentinel device is designed to limit the spread of Covid-19, and other viral or bacterial infections, in a cost-effective, simple way 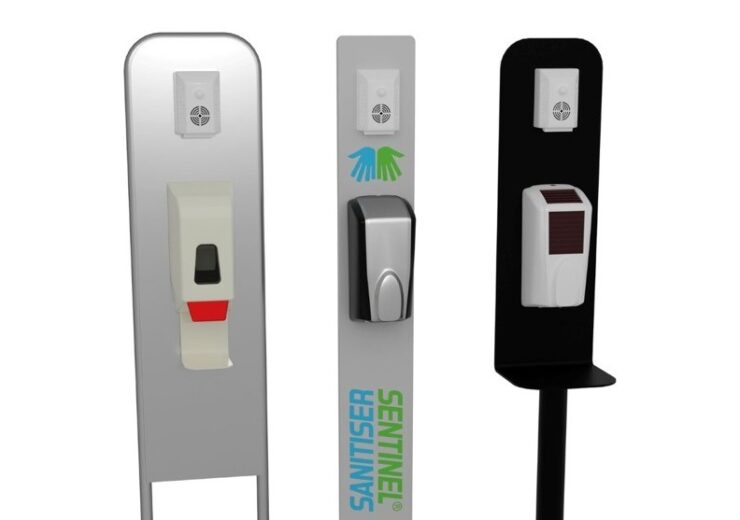 The Sanitiser Sentinel can be placed above a wall-mounted hand sanitiser, soap dispenser, or even a bottle of hand gel on a table (Credit: Sanitized Environments)

The Sanitiser Sentinel – a device that reminds people in healthcare practices to sanitise their hands – has entered clinical trials in the UK.

The device uses automated light and voice prompts to alert people when they pass by a hand sanitiser station or soap dispenser.

By encouraging and enforcing handwashing without the need for a member of staff to be present, it is intended to limit the spread of Covid-19 – as well as other viral or bacterial infections – and save time and costs in the process.

Having now officially launched, it becomes the first product of its type in the world, and will be trialled in several NHS and private medical practices across the UK.

Vivian Blick, the founder and managing director of Sanitiser Sentinel, said: “In all of my years of global product inventions, manufacturing and production, I don’t think I have ever worked on a project that has the potential to save so many lives.

“We are excited to be launching the world’s first visual and spoken hand sanitisation reminder, that not only saves lives but also helps to limit the spread of harmful diseases.

“It is often easy for people to forget to sanitise their hands, especially when there is no one manning these stations, so this removes the potential for human error.

“The interest and take up that we have already had from both clinical and private organisations alongside global distribution companies shows just how valued this product already is.”

What is the Sanitiser Sentinel?

The Sanitiser Sentinel – which is marketed by a UK-based company of the same name – is a standalone unit that can be affixed on a wall above or close to a hand sanitiser or soap dispenser.

It uses an infrared sensor to detect when a person comes within range of the machine, up to a distance of eight metres.

When the sensor is set off, it produces flashing lights and plays a recorded message that will remind the passer-by to wash or sanitise their hands.

The device features numerous selectable messages and sounds in about 20 different languages, with toggles to adjust the volume, and turn the lights on and off. It also allows users to add their own bespoke or corporate messages via a micro SD card.

And, despite being battery-powered, the Sanitiser Sentinel’s creators claim it will be able to run 200,000 operations using both light and voice alerts – which, for the average installation, is equivalent to five years of use.

Alongside the medical and dental facilities it will now be trialled in, the Sanitiser Sentinel is currently being evaluated in a factory, a hairdresser’s salon, a gym and a physiotherapy clinic in the UK – and the company is currently looking for supermarkets and other retail outlets in which to conduct further trials too.