Researchers at ETH have produced a gel from cellulose fibres and biodegradable nanoparticles that liquifies when pressed through the nozzle of a 3D printer, but then quickly returns to its original shape. 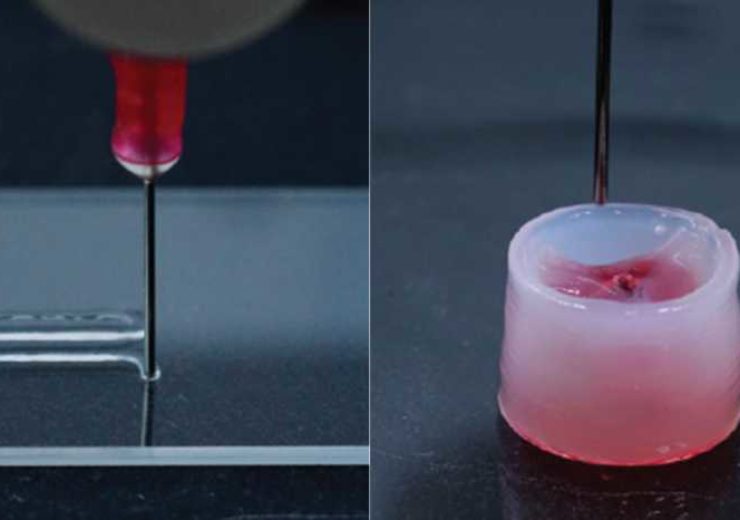 Image: The new carrier ink can be used to produce personalized implants such as heart valves. (Credit: Guzzi, et al. 2020.)

Their invention paves the way for personalised biomaterial implants.

In the same way that medicine has seen a trend towards precision medicine – where treatment is tailored to the genetic make-​up of the patient – in recent years, materials scientists are increasingly turning their attention to precision biomaterials. As things stand, however, personalised implants are still a long way off. “But at the moment, we’re making great progress toward this goal – and learning a lot in the process,” says Mark Tibbitt, Professor of Macromolecular Engineering in the Department of Mechanical and Process Engineering at ETH Zurich.

Previously, researchers working in the field of precision biomaterials were held back by the fact that they had to develop new [A1] inks for the 3D printer for each application. “If someone wanted to replicate part of an eye, for instance, they weren’t able to draw on the work of people who design auricular prostheses,” Tibbitt explains. But now, he and his team have invented a universal carrier ink that “dramatically simplifies” the development of new applications, as the researchers write in their paper.

Essentially, 3D printing calls for a solution to a conundrum casually referred to as “the toothpaste problem”: on one hand, toothpaste should not be too viscous as that would make it difficult to squeeze through the narrow opening of the tube; on the other, it can’t be too fluid because it would then immediately drip off the toothbrush. Similarly, in 3D printing, the carrier ink needs to be able to liquefy to flow through the printing nozzle, and then solidify so that the printed structure does not immediately lose its shape.

This is where the universal carrier ink that Tibbitt’s team has developed can help. It consists of cellulose fibres dissolved in water combined with biodegradable polymeric nanoparticles. When no external pressure is being exerted, the fibres attach themselves to the particles. This creates a transient network that can be disrupted when subjected to the high shear forces in the printer nozzle – but that quickly reforms after passing through the narrow opening.

In further experiments, Tibbitt and his team of researchers added different polymers (such as hyaluronic acid, gelatine, collagen, or fibrinogen) to their new carrier ink. These secondary polymers did not change the ink’s flow behaviour through the head of the printer nozzle, but enabled the researchers to solidify the transient network to form the printed structure in a second, subsequent step.
Novel drug administration systems

Tibbitt’s team also tested how living cells behave in the carrier ink – and found that the same number of cells survive in the ink as they do outside. Based on the fact that hydrophobic substances can be introduced into the nanoparticles – and hydrophilic substances can be added to the aqueous phase with the cellulose fibres – the researchers demonstrated that their ink is also suitable for the development of novel drug delivery systems. Due to its suitability for use in a wide range of applications, calling their ink carrier for 3D printing “universal” is certainly no overstatement.