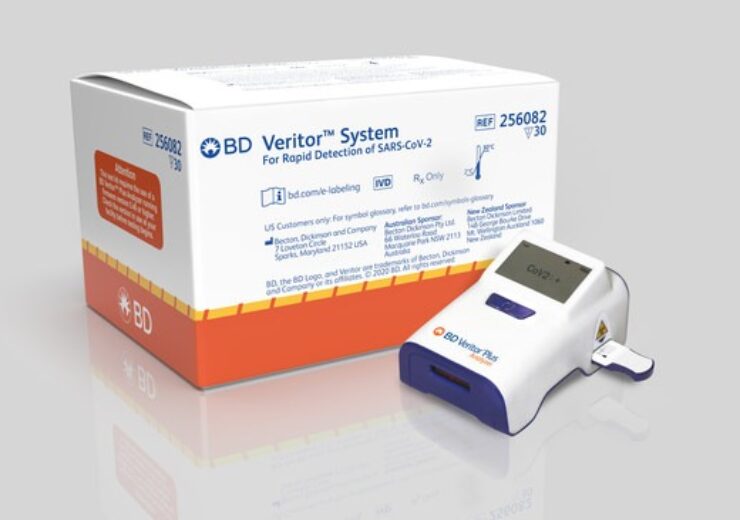 BD (Becton, Dickinson and Company) (NYSE: BDX), a leading global medical technology company, today announced the results of a new research study that demonstrated performance of the BD Veritor™ System for Rapid Detection of SARS-CoV-2 Assay was equivalent to that of the Quidel Sofia 2 SARS Antigen Fluorescent Immunoassay (AFI).

In the blinded, head-to-head study, 361 patient samples representing a cross-sectional population were tested for the detection of SARS-CoV-2 using both the BD Veritor™ Plus system and the Quidel Sofia 2 SARS AFI. The two testing platforms had a high degree of agreement on testing results. When there was disagreement between the tests (i.e. one showed positive, one showed negative), the samples were then tested using molecular PCR (polymerase chain reaction), which has higher sensitivity than antigen tests. The PCR analysis of the discrepancies favored the BD Veritor™ Plus system, which had more agreement with PCR analysis than the Quidel Sofia 2 SARS AFI. Of the seven discrepancies, PCR analysis agreed with the BD Veritor™ Plus system on five results and agreed with the Sofia 2 SARS AFI on two results. Overall, the study suggests a high degree of agreement in testing accuracy between the two systems.

“The difference in published sensitivity claims for the Quidel Sofia SARS AFI (96.7%) versus the BD Veritor™ Plus system (84%) was not supported by this study, probably due to the differences in study designs and patient populations in this study versus the Sofia EUA study,” said Dr. Charles Cooper, M.D., vice president for Medical and Scientific Affairs at BD and a co-author of the study. “This study was designed to assess performance in samples from patient populations who commonly seek testing in community-based point-of-care locations where rapid antigen tests would typically be most often used. Other studies enrolled patients in emergency rooms and hospitalized patients which, among other study design factors, have the potential to influence antigen testing positive percent agreement1. The study also suggests that the number of symptoms in selection criteria may influence positive percent agreement of antigen-based point-of-care testing as well.”

Dr. Stephanie N. Taylor, M.D., Professor of Medicine, Section of Infectious Diseases at Louisiana State University and a study co-author said, “This study shows that EUA labeled sensitivity and specificity should not be the sole basis for understanding antigen assay performance. Other factors, such as clinical trial enrollment criteria, study population characteristics, clinical setting, reference method sensitivity, overall prevalence in the trial population and the limit of detection for each antigen test are all important considerations in order to arrive at a fuller understanding of overall performance.”

In addition to showing a high degree of agreement between the two tests, the study also supports that the combination of reliable accuracy and speed to result (about 15 minutes) of rapid antigen tests are valuable tools to combat the COVID-19 pandemic, particularly in decentralized health care settings where larger-scale, molecular-based tests are not practical or would result in significantly longer turnaround times.

As part of its emergency use authorization (EUA) for the SARS-CoV-2 assay for the BD Veritor™ Plus system, BD completed one of the geographically broadest U.S. clinical trials of any antigen test on the market today, collecting and analyzing 226 samples from 21 diverse areas across the United States. This effort was intended to reflect performance across a range of different community-based clinical settings by enrolling patients reflective of those typically seeking rapid point-of-care diagnostic testing. The BD Veritor™ Plus system was studied in care settings and patient populations most likely to rely on rapid point-of-care tests, including ambulatory care sites, outpatient clinics, drive-through and walk-up testing sites, and skilled nursing facilities.

The research study authors have submitted the paper for peer-review consideration to an infectious disease journal. The preprint article titled “Clinical evaluation of BD Veritor™ SARS-CoV-2 point-of-care test performance compared to PCR-based testing and versus the Sofia SARS Antigen point-of-care test” is currently available on medRxiv.