A Northwestern University team led by nanotechnology pioneer Chad A. Mirkin has developed a direct route to optimize the challenging particles, bringing them one step closer to becoming a viable treatment option for many forms of cancer, genetic diseases, neurological disorders and more. 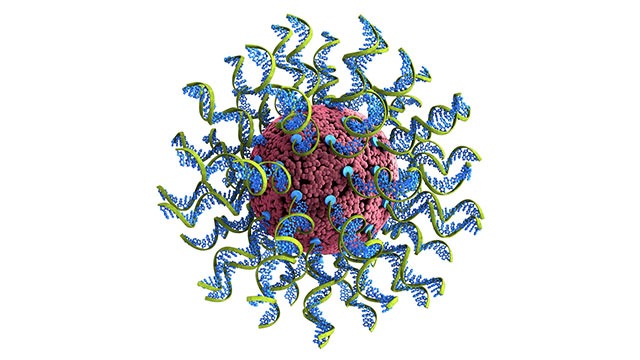 Image: SNAs are ball-like forms of DNA and RNA arranged on the surface of a nanoparticle. Photo: courtesy of Northwestern University.

With their ability to treat a wide a variety of diseases, spherical nucleic acids (SNAs) are poised to revolutionize medicine. But before these digitally designed nanostructures can reach their full potential, researchers need to optimize their various components.

“Spherical nucleic acids represent an exciting new class of medicines that are already in five human clinical trials for treating diseases, including glioblastoma (the most common and deadly form of brain cancer) and psoriasis,” said Mirkin, the inventor of SNAs and the George B. Rathmann Professor of Chemistry in Northwestern’s Weinberg College of Arts and Sciences.

A new study published this week in Nature Biomedical Engineering details the optimization method, which uses a library approach and machine learning to rapidly synthesize, measure and analyze the activities and properties of SNA structures.

The process, which screened more than 1,000 structures at a time, was aided by SAMDI-MS technology, developed by study co-author Milan Mrksich, Henry Wade Rogers Professor of Biomedical Engineering in Northwestern’s McCormick School of Engineering and director of the Center for Synthetic Biology.

Invented and developed at Northwestern, SNAs are nanostructures consisting of ball-like forms of DNA and RNA arranged on the surface of a nanoparticle. Researchers can digitally design SNAs to be precise, personalized treatments that shut off genes and cellular activity, and more recently, as vaccines that stimulate the body’s own immune system to treat diseases, including certain forms of cancer.

SNAs have been difficult to optimize because their structures — including particle size and composition, DNA sequence and inclusion of other molecular components — can vary in many ways, impacting or enhancing their efficacy in triggering an immune response.

This approach revealed that variation in structure leads to biological activities showing non-obvious and interdependent contributions to the efficacy of SNAs. Because these relationships were not predicted, they likely would have gone unnoticed in a typical study of a small set of structures.

For example, the ability to stimulate an immune response can depend on nanoparticle size, composition and/or how DNA molecules are oriented on the nanoparticle surface.

“With this new information, researchers can rank the structural variables in order of importance and efficacy, and help establish design rules for SNA effectiveness,” said Andrew Lee, assistant professor of chemical and biological engineering in the McCormick School of Engineering and study co-author.

“This study shows that we can address the complexity of the SNA design space, allowing us to focus on and exploit the most promising structural features of SNAs, and ultimately, to develop powerful cancer treatments,” said Mirkin, who is also director of the International Institute for Nanotechnology.

The research was conducted as part of the Northwestern University Center for Cancer Nanotechnology Excellence (Northwestern CCNE), a partnership between the Robert H. Lurie Comprehensive Cancer Center and the IIN, that is solely focused on utilizing SNAs to develop next-generation cancer treatments. The program is funded through a grant from the National Cancer Institute (NCI).