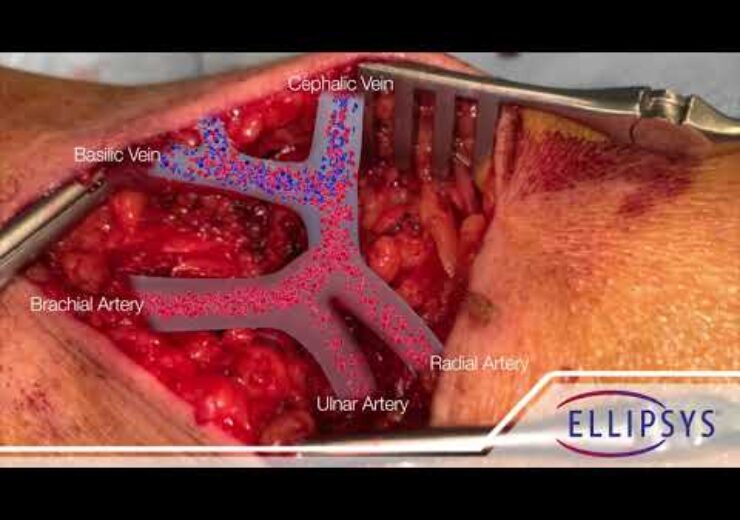 A new case report published in the Journal of Vascular Surgery provides one of the first known opportunities to directly visualize the permanent and fused connection (anastomosis) that is created with the minimally invasive Ellipsys® Vascular Access System. The Ellipsys System, made by Avenu Medical, creates a type of dialysis access known as a percutaneous arteriovenous fistula (pAVF) for patients with end-stage renal disease (ESRD) who require hemodialysis.

“This is the first published report of direct visualization of a matured pAVF created with the Ellipsys System,” said lead author Alexandros Mallios, MD, a vascular surgeon at Paris Saint-Joseph Hospital in Paris, France. “It was an amazing opportunity that provided first hand proof of the permanent, fused vessel anastomosis made possible by this revolutionary technology.”
Hemodialysis requires access to the patient’s bloodstream, which is often created by establishing a permanent connection between an artery and a vein in the arm known as an arteriovenous fistula (AVF). Traditionally, fistulas are created during an open surgical procedure by suturing the artery and vein together. In contrast, the Ellipsys System uses a small needle puncture and catheter to percutaneously establish an AVF without an implant or suture, leaving the vessels and tissue around the fistula undisturbed.

The subject of the case report was an 80-year-old male diabetic ESRD patient who had a pAVF created with the Ellipsys System 6 months prior. He was evaluated for decreasing blood flow (unrelated to his fistula) and required surgical intervention, which provided the opportunity to visualize the matured Ellipsys pAVF up close. According to Dr. Mallios, the lack of sutures or other foreign bodies made the fusion look “remarkably natural.”

Dr. Mallios has published numerous studies showing the ability of the Ellipsys System to easily and safely create durable vascular access for ESRD patients. In July 2020, he reported one-year follow-up results of 234 Ellipsys patients, the largest study of any pAVF technique to date. Published in JVS, the study reported no adverse events and 96 percent of patients still had fully functioning fistulas with strong blood flow after a year. That “patency rate” is higher than published rates for surgically created fistulas, which average about 60% after one year.

In April 2020, JVS published a case report by Dr. Mallios that featured a 3-D rendering of the Ellipsys pAVF on the cover of the publication. Dr. Mallios also co-authored two recent papers in the Journal of Vascular Access that discussed patient eligibility for Ellipsys and the similarities between an Ellipsys pAVF and a surgical AVF, the current standard of care.

Cleared by the FDA in 2018 for patients with end-stage renal disease, Ellipsys is the first significant innovation in AVF creation in over 50 years. It transforms a complex surgery into a minimally invasive procedure that can be performed in a hospital outpatient setting, ambulatory surgery center or physician’s office. Since 2015, nearly 3,000 patients worldwide have undergone the Ellipsys procedure.

Medtronic recently announced its plan to acquire Avenu Medical for the Ellipsys percutaneous fistula creation technology. Terms of the deal were not disclosed.