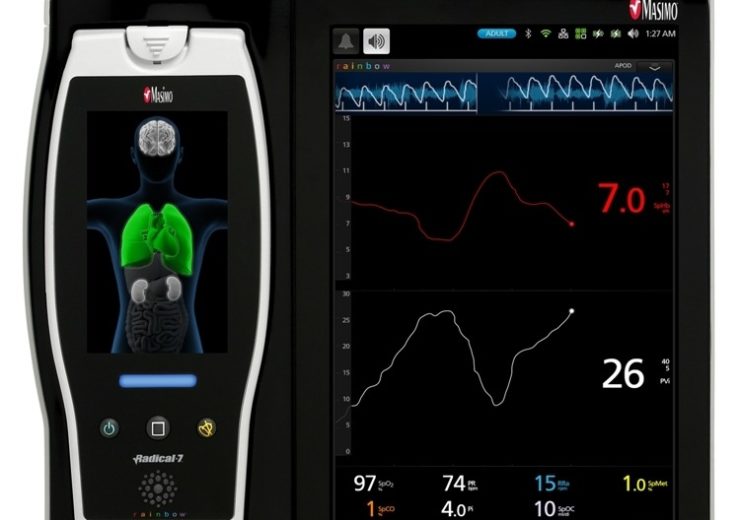 Image:Masimo Root with SpHb and PVi. Photo: Courtesy of Masimo.

Masimo announced today that in a study published in the Journal of Clinical Monitoring and Computing, researchers investigated the effects of implementing a hospital-wide fluid and blood administration protocol using two Masimo measurements: noninvasive, continuous hemoglobin (SpHb) and pleth variability index (PVi). To evaluate the impact of the implementation, they collected data on transfusions and mortality 30 and 90 days after surgery and compared the findings between two 11-month periods in 2013 and 2014.

For the 2014 patients, Masimo Radical-7 Pulse CO-Oximeters equipped with SpHb and PVi were installed in all operating rooms, recovery rooms, and intensive care units. The entire anesthesiology team, including nurses, was trained on use of the monitors and the algorithm, and was free to decide whether or not to use goal-directed therapy for each case. Transfusion and mortality data were recorded for all patients.

The authors also reported on mortality rate the year after the study ended (2015), when the hospital no longer had access to SpHb and PVi. Comparing 2015 patients to patients in the study, they found that mortality at 30 and 90 days increased again to levels similar to those found in 2013 (before implementation), respectively 2.18% and 3.09%.

The authors noted, “Because patients who did not receive GDT based on the PVi had similar mortality rates in 2014 and 2013, a Hawthorne effect-inducing care improvement does not explain the present results. The post-study increase in mortality, at the time when monitors were no longer available, suggests that education of the team to improve fluid management does not explain the present results.”

The authors noted, “This study shows that using an algorithm based on continuous Hb measurement and fluid responsiveness with PVi in common clinical practice is associated with different transfusion practices and a lower adjusted-mortality at 1 and 3 months. When considering confounding factors such as ASA class, severity of surgery and emergency, the monitor-based algorithm lowers transfusion probability by approximately 30% during surgery and at 48 h. In non-cardiac surgeries, patients were transfused sooner and more often but with less blood units in the GDT group. In non-cardiac surgery, continuous Hb monitoring alerted anesthesiologist on the anemia risk they might under-evaluated without monitoring. This was the opposite, in cardiac surgery where practitioners behave differently. When using continuous SpHb monitoring, perioperative transfusion was reduced because anesthesiologists probably less feared under-transfusion. The net observed effect was an 11% and 6.5% reduction in blood units transfused in the operating room and at 48 h.”

The researchers concluded, “Monitoring SpHb and PVi integrated in a vascular filling algorithm is associated with earlier transfusion and reduced 30 and 90-day mortality on a whole hospital scale.” They continued, “In conclusion, this integrated comparativei effectiveness study shows that using an algorithm of fluid and blood transfusions based on continuous Hb measurement and PVi is associated with reduced mortality.”

Joe Kiani, Founder and CEO of Masimo, commented, “We thank Professor Nathan and her team for this outstanding study. All of the outcome studies to date with continuous SpHb have shown its benefits in transfusion management and numerous studies with PVi have demonstrated its role in fluid management, but this is the first time a study has shown how using goal-directed therapy with SpHb and PVi can have such a big impact on mortality. As is central to our mission, we encourage researchers to continue to study the impact of SpHb and PVi to see if indeed these fantastic results can be repeated in other institutions, for example those with different mortality rates, and if so, help expand their use to improve patient outcomes around the world.”

SpHb is not intended to replace laboratory blood testing. Clinical decisions regarding red blood cell transfusions should be based on the clinician’s judgment considering among other factors: patient condition, continuous SpHb monitoring, and laboratory diagnostic tests using blood samples.