ContinueLearn More X
Home » News » Livia: Has the age-old practice of e-stim been adapted to switch off period pain?

Livia: Has the age-old practice of e-stim been adapted to switch off period pain?

The company behind Livia makes bold claims about its ability to switch off period pain better than a TENS unit, especially when it's a lot pricier 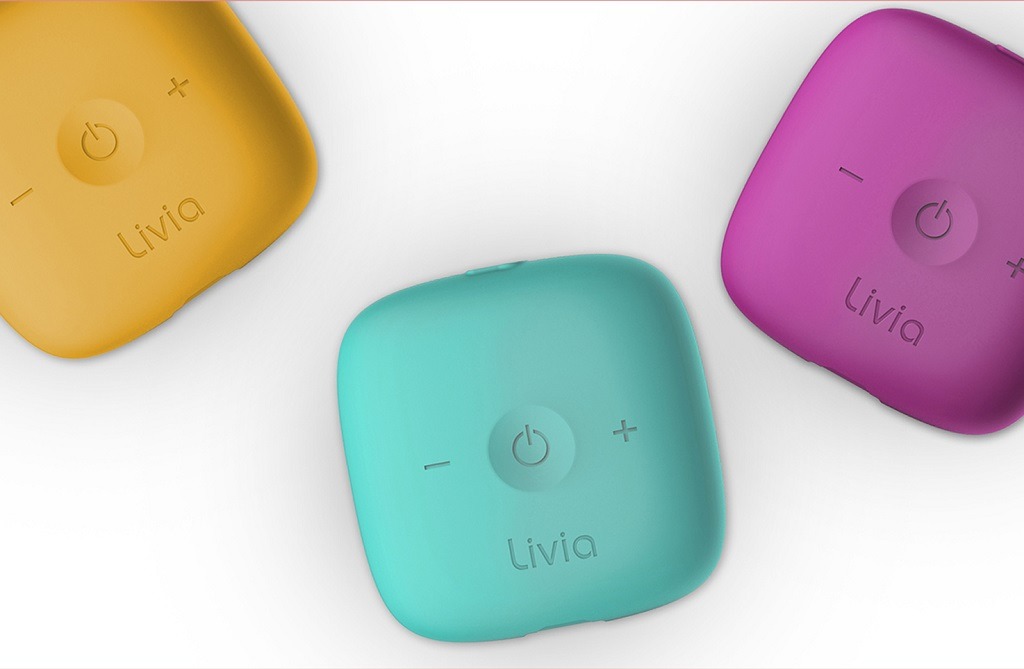 Livia operates under the same foundations as a TENS machine, but with one patented tweak (Credit: Livia)

Period pain can be the bane of a woman’s existence – so much so that handing over $140 might not seem so painful if it means adequate relief. Livia is the company proposing a device that does just that at such a price point. Peter Littlejohns speaks to the founder behind it.

Electrical stimulation (e-stim) has been around since ancient Greece – only back then it was administered by a fish.

Of course, the Electric Ray in question had no idea it was being attached to the feet or head of a human in an effort to relieve the pain of gout or a headache respectively, but remarkably it was successful enough to become a regular treatment option for thousands of years to follow.

The electrical nature of the treatment was illuminated during the European enlightenment period, and the learnings paved the way for modern e-stim technologies – like Livia.

The fundamentals behind Livia are similar to those of the TENS (transcutaneous electrical nerve stimulation) machine – a device invented in the 1970s and since used to ease the pain of childbirth, alongside a range of medical conditions that cause chronic pain.

The difference, however, is that Livia manufacturer iPulse Medical claims the device is specialised to give relief from an experience from which roughly half of the world’s population suffer – period pain.

“Livia is based on the technology of TENS machines, but we improved it, and the secret is the wave shape and its accuracy,” says iPulse Medical CEO Chen Nachum.

“If you take a regular TENS machine and use it for menstrual pain, the result would be relief after 20 or 30 minutes.

“When you use Livia, you get dramatic results after 30 to 60 seconds.”

It’s these dramatic results that iPulse characterises as an “off switch” for period pain – but even the firm’s own clinical evidence suggests this is a bit of an exaggeration.

What makes Livia an effective tool for suppressing menstrual pain?

A TENS machine attaches to the skin using pads and sends electric pulses into it that reduce pain by sending signals to the spinal cord and brain through the nerves.

The science at work here can be explained by the Gate Control Theory, a widely-accepted view of how pain is expressed by the body proposed in 1965 by psychologist Ronald Melzack and neuroscientist Patrick Wall.

Although the field of pain has evolved to show that certain aspects of the original theory were not wholly accurate, the core argument – that the spinal cord contains a neurological “gate” that can block pain signals from reaching the brain – is still generally accepted.

“The body cannot respond to two forms of pain at the same time in the same place,” explains Nachum.

“If you make a small cut on the tip of your finger, and you then put it above a candle flame, you will only feel the most intense one,” he adds.

Livia works on the same principle, but Nachum’s father Zvi Nachum – an inventor with more than 30 patents in the medical space – discovered a way to close the gate more effectively by changing the wave shape that allows the device to transmit electric micro-pulses.

Nachum says when his father came up with the idea for a period-pain suppression device 20 years ago, the size of the microchips, capacitors and resistors required to make it a reality would have meant it couldn’t have been packaged in anything smaller than a device the size of a tape recorder.

With technology having advanced enough to scale it down to a size by which women could enjoy pain relief on the go, Nachum dug out his father’s research in 2016 and made it a reality.

The secret behind Livia’s wave shape is concealed in a 70-page patent – which is pending approval outside of the UK where it has already been granted – but a summary explanation highlights that it relies on how closely an electric pulse resembles a square when recorded on an oscilloscope.

According to the patent summary, because it takes several microseconds for a TENS unit to produce a waveform from start to finish, the shape it produces is diagonal and the slow speed allows the body’s central nervous system (CNS) time to adjust to it, which results in it receiving other signals, including menstrual pain.

On the other hand, the summary says Livia produces its waveform at a fraction of a microsecond, which results in it being recorded as a square shape and being too fast for the CNS to adjust to it.

This, it says, makes it impossible for the system to receive menstrual pain signals.

Does Livia give relief from period pain?

The science behind Livia is far from settled, as the utility of electric waveforms in pain reduction is still an ongoing area of study itself – but just like TENS, the evidence suggests Livia does help, but that it has limitations too.

While we can only assume that James Dyson spent many hours pushing the 5,126 prototypes of his infamous vacuum cleaner around his living room, Nachum lacked the biological components required to conduct even a single proof-test on Livia himself.

Faced with this limitation, before launching the Indiegogo crowdfunding campaign in 2016 that would net him $1.7m in start-up capital, he sent prototype devices to several female journalists to review.

“For me, beyond helping the campaign to be successful, it was also about finding out what people really thought about the device,” Nachum says.

“We got 20 amazing articles, one after another, each boosting the sales on the campaign.”

A quick Google search reveals some mixed impressions from writers that have tried the device, with Huffington Post author Natasha Hinde eschewing the price point of £129 ($149 in the US) given the underwhelming performance she experienced.

Likewise, Julia Belluz from Vox quoted a OB-GYN and pain medicine specialist, who said she believed Livia was an expensive pink TENS unit – a device that tends to cost about £30 ($40) – until proven otherwise by peer-reviewed data.

The largest study monitored 102 participants over four cycles, two of which they used Livia

Three main issues that prevent Livia being effective, says Nachum, are the existence of a large amount of fat tissue through which an electric pulse must travel, the elasticity of the skin after childbirth, and the sheer intensity of pain, especially that experienced by sufferers of endometriosis.

To overcome these barriers, Nachum says work is currently underway to produce a device with a more powerful electrical pulse targeted at endometriosis sufferers as well as those whose period pain is past the capabilities of the current Livia.

He expects this second device will take another year of work.

Until then, an “off switch” might be a bit of an overstatement for Livia, and until a peer-reviewed study can prove the company’s patented waveform is superior to that of a regular TENS machine, the jury is out on whether it’s worth the extra cash.