The PERfECT wearable system can precisely characterise the overall performance of the electrochemical transistor, with a data sampling rate as high as 200 kilosamples per second – a performance on par with bulky commercial equipment 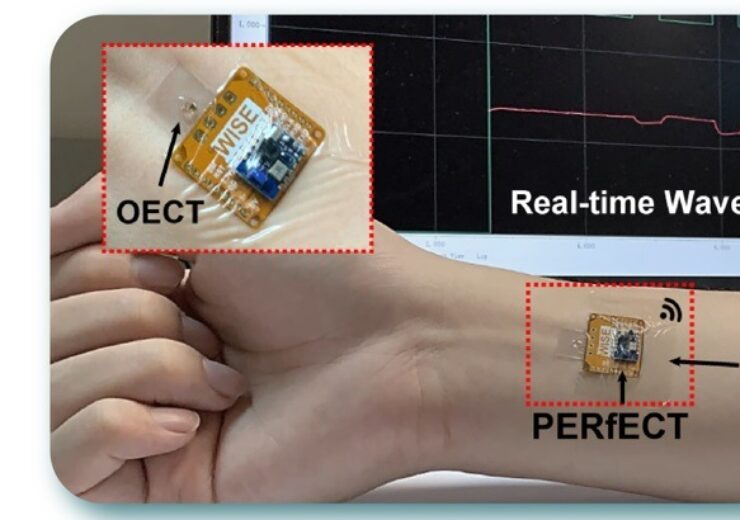 A team of researchers in the Faculty of Engineering of The University of Hong Kong (HKU) has developed a coin-sized system that can read weak electrochemical signals, which can be used for personalised health monitoring and measurement of such conditions as diabetes, cardiovascular diseases and mental health. The discovery was featured on the cover of the Journal of Analytical Chemistry.

The PERfECT System – an acronym for Personalised Electronic Reader for Electrochemical Transistors – is the world’s smallest system of its kind, measuring 1.5 cm x 1.5 cm x 0.2 cm and weighing only 0.4 grams. It is easily wearable, for instance integrated with a smartwatch or as a patch, to allow for continuous monitoring of biosignals such as glucose levels and antibody concentrations in blood and even sweat.

“Our wearable system is tiny, soft and imperceptible to wearers, and it can do continuous monitoring of our body condition. These features mean it has the potential to revolutionise healthcare technology,” said Dr Shiming Zhang of the Department of Electrical and Electronic Engineering, who leads the HKU WISE (wearable, intelligent and soft electronics) Research Group to develop the system.

The technology marks a big step forward for organic electrochemical transistors, which are widely considered to be the next-generation sensing technology because of their water stability and high sensitivity at low operating voltage (milli-volts) but which, until now, lacked a miniaturised wireless system to operate within.

The PERfECT wearable system fills that niche. It can precisely characterise the overall performance of the electrochemical transistor, with a data sampling rate as high as 200 kilosamples per second – a performance on par with bulky commercial equipment. But the price is only one-tenth of the commercial one.  It can also serve as a miniaturised electrochemical station for wearable devices and measure the outputs of other kinds of low-voltage transistors, such as electrolyte-gated field effect transistors and high-k dielectric-gated thin-film transistors.

The system could be applied immediately in multiple wearable systems that are based on low-voltage transistors. Dr Zhang’s group has formed a start-up company, SESIC, to make the technology accessible.

“We have been able to develop the PERfECT system because of the unique, interdisciplinary culture in the HKU WISE Research Group, which includes researchers from electrical engineering, applied chemistry, biomedical engineering, microelectronics and software engineering. I have also made it a point to recruit young, promising undergraduate and postgraduate students to our team,” said Dr Zhang, who has been working on wearable technologies for digital healthcare since 2013, when he was a PhD student.

The WISE students have won multiple awards for their creative innovations on wearable healthtech, including the Hong Kong Academy of Engineering Sciences (HKAES) 2021-22 University Pitch Competition on Global Grand Challenges, which qualified them as one of only five teams from China for the International Student Competition of the 5th Global Grand Challenges Summit; The Materials Research Society (MRS) Best Presentation Award (2021 Fall); The IEEE Engineering in Medicine and Biology Society Project Competition Award (2021); and The InnoShow Awards (winning twice, 2021&2022).

“The vision for WISE is to promote the transition from ‘hospital-centric’ to ‘human-centric’ healthcare by developing next-generation wearable, intelligent and soft electronics technologies – hence the name WISE,” Professor Zhang said.