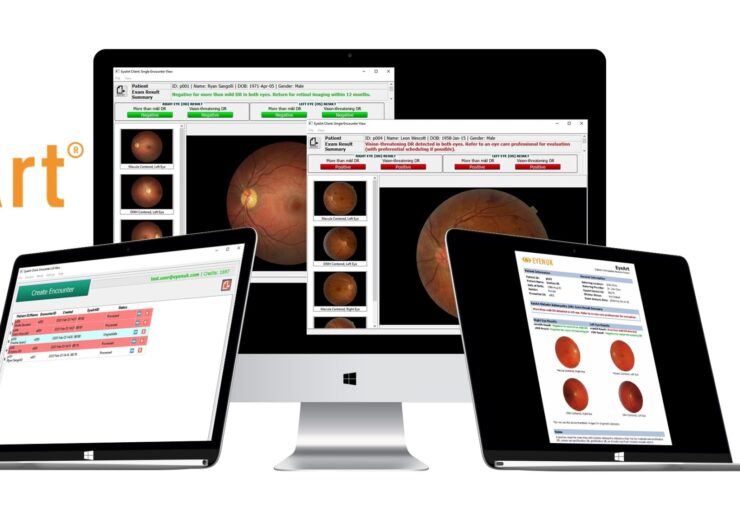 Eyenuk, a global artificial intelligence (AI) medical technology and services company and the leader in real-world applications for AI Eye Screening, announced today that it has received 510(k) clearance (K200667) by the U.S. Food & Drug Administration (FDA) to market its EyeArt autonomous AI System for diabetic retinopathy, a leading cause of blindness among American adults.

Diabetic retinopathy (DR) is a common complication of diabetes. It is characterized by progressive damage to the blood vessels of the retina, the light-sensitive tissue at the back of the eye that is necessary for good vision. According to CDC, an estimated 4.1 million and 899,000 Americans are affected by retinopathy and vision-threatening retinopathy, respectively. It is estimated that number of vision-threatening diabetic retinopathy patients around the world will reach 56.3 million by 2030.

While DR screening is recommended for all diabetic patients, less than half get screened annually3, even in the developed world. Since more than 30 million Americans have diabetes and diabetic patients outnumber ophthalmologists by 1,600 to 1 in the U.S.,4 there are just not enough eye care specialists to meet the DR screening needs of the growing diabetic population. Even for those receiving their annual screening, ophthalmology appointment wait times for DR screening can be weeks or even months. Since pharmaceutical and surgical therapeutics can effectively prevent DR related blindness when patients are identified and treated on a timely basis, offering convenient and reliable DR screening without over-burdening eyecare professionals has become a top priority of governments, health systems and payors around the world.

The EyeArt 510(k) clearance is based on a pre-registered, prospective, multi-center pivotal clinical trial (ClinicalTrials.gov ID NCT03112005). A total of 942 participants were consented of which 915 participants met study eligibility criteria. Of the 655 participants aligned for analysis to establish substantial equivalence, 380 were enrolled at 7 primary care sites and 275 were enrolled at 4 ophthalmology sites. Study participants underwent 2-field retinal photography for analysis by the EyeArt system. They then underwent dilated four wide field stereo retinal photography for the reference standard which was determined by expert graders at the Fundus Photography Reading Center (FPRC), according to the Early Treatment for Diabetic Retinopathy Study severity (ETDRS) scale. The rigorous ETDRS reference standard implemented by a reading center such as FPRC is typically only used in clinical trials and not feasible in clinical practice due to its significant requirements for time and resources.

EyeArt’s FDA clearance was based on analysis of EyeArt performance in participants enrolled at primary care and general ophthalmology sites during a period of time where enrollment was sequential and also during a period where sites were permitted to enrich the study population. The sequential enrollment allows for an unbiased representation of the US diabetic population and provides the following topline results from this pivotal clinical trial.

The study also showed that novice operators can be trained to obtain medical grade retinal images. Even at primary care centers where most operators did not have prior ophthalmic imaging experience, EyeArt had an imageability of 97% (i.e., disease detection results were provided for 97% of eyes that received a reading center grading). Moreover, a vast majority of participant eyes (90%) received disease detection results without needing dilation.

“This is great news to over 30 million Americans living with diabetes, especially those who may have vision-threatening diabetic retinopathy. The EyeArt autonomous AI System can now enable safe, effective, and equitable diabetic eye screening at convenient point-of-care locations, with AI results available in less than 1 minute,” said Kaushal Solanki, Ph.D., founder and CEO of Eyenuk. “This historical FDA clearance is our first major milestone enabled by our prospective, multi-center pivotal clinical trial which took us years to plan and complete.”

The EyeArt system is indicated for use with two models of fundus camera in the U.S., Canon CR-2 AF and Canon CR-2 Plus AF. Eyenuk plans to expand the list of EyeArt-compatible imaging devices, by leveraging Eyenuk’s deep expertise in device validation, clinical research, and regulatory process in markets around the world.

Autonomous AI for diabetic retinopathy screening will likely be covered by payors starting 2021. In May 2019, the AMA CPT Editorial Panel created new CPT code 9225X (Imaging of retina for detection or monitoring of disease; with point-of-care automated analysis with diagnostic report; unilateral or bilateral) for point-of-care automated analysis that uses innovative AI technology to perform the interpretation of the eye exam, without requiring that an ophthalmologist interpret the results. Medicare is considering CPT code 9225X to be a diagnostic service under the Physician Fee Schedule and is creating separate payment for it.

About the EyeArt AI System

The EyeArt AI Eye Screening System provides fully automated DR screening, including retinal imaging, DR grading on international standards and immediate reporting, in a single office visit during a diabetic patient’s regular exam. Once the patient’s fundus images have been captured and submitted to the EyeArt AI System, the DR screening results are available in a PDF report in less than 60 seconds. EyeArt’s FDA cleared indications for use in the U.S. is below.

The EyeArt AI System was developed with funding from the U.S. National Institutes of Health (NIH) and is validated by the U.K. National Health Service (NHS). In addition to US FDA clearance, the EyeArt AI System has CE marking as a class 2a medical device in the European Union and a Health Canada license. It is designed to be General Data Protection Regulation (GDPR) and Health Insurance Portability and Accountability Act of 1996 (HIPAA) compliant.