Enlitic, a privately-held company utilizing artificial intelligence to streamline medical imaging workflows for radiologists, announced the close of its $15m series B financing round. 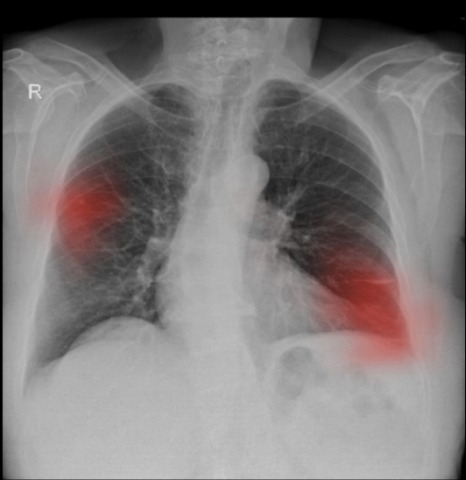 Image: The scan highlights the presence of lung nodule in the mid zone of the right lung and linear atelectasis in the left lung. Photo: courtesy of Business Wire.

The investment was led by Marubeni, with whom the company has been developing the Japanese market since 2017. The round saw further investment from Capitol Health, who previously led the company’s Series A in 2016, as well as new participation from several top investors in Australia.

Approximately 10% of the round was set aside for individual radiologists and other physicians who have either trained or used the company’s medical AI solutions. Enlitic plans to use the funding to enhance its artificial intelligence product portfolio, expand its engineering and data scientist teams, and focus on regulatory approval for clinical use in the US, Australia, Japan, Europe, Canada, and Brazil.

Kevin Lyman, CEO of Enlitic, commented, “Radiologists have one of the hardest jobs in the world. They need to be able to identify thousands of different abnormalities in hundreds of different types of images.

“Even a single mistake can mean life or death, and yet they’re asked to read under tremendous time pressure in an environment full of distractions. Our Series B is a huge step toward helping them relieve this pressure and improve patient outcomes. We are incredibly grateful for the support of our partners, including Marubeni and Capitol Health, and look forward to continuing our work with them to build meaningful diagnostic solutions.”

Enlitic uses deep learning and other forms of artificial intelligence to develop algorithms that identify and analyze suspicious findings in medical images. Working closely with hospitals and radiology providers around the world, the company has developed a comprehensive platform enabling the development, validation, and seamless integration of clinical AI at scale.

Radiologist Dr. Anthony Upton, Chief Medical Officer at Enlitic, remarked, “Closing this round is a significant advancement to help Enlitic achieve its ambitious strategy to make meaningful clinical products for radiology and the associated healthcare markets. This will allow Enlitic to scale production towards achieving AI models that cover the entire body, which will offer a significant impact to daily clinical workflows.”

Enlitic’s first product interprets chest x-rays, triaging normal from abnormal scans, and detecting and characterizing more than 40 distinct abnormalities such as cardiomegaly, lung nodules, and pneumothorax. Chest x-rays are notoriously difficult to interpret given the image’s lack of specificity, yet they are still the most common type of radiological examination, representing an estimated 45% of all studies globally. Enlitic is working with partners around the world for the relevant approvals to deploy this product in several countries, helping radiologists to interpret chest x-rays faster, and with higher accuracy.

Recognizing the massive complexity of the average diagnostic workflow, Enlitic is rapidly training models to assist in more areas of radiology.

In January of this year, the company launched their new datacenter with a GPU supercluster enabling model development at more than 10x the speed. In February, they launched their global beta program, enabling their models to be regionally tuned and tested in several countries simultaneously. At their current pace, Enlitic expects to be able to interpret 95% of all types of x-rays by the end of 2019, and 95% of common CTs and MRIs by 2021.

Marubeni, who led the Series B investment round, is a Japanese trading company and one of the largest sogo shosha, (general trading companies), with 12 business divisions. Marubeni is a key partner to Enlitic and will help drive development and adoption of Enlitic’s products in Japan.

Marubeni added, “Japan especially suffers from an aging population and a shrinking birth rate, placing an increasing burden on hospitals and radiologists. With Enlitic’s groundbreaking AI products, we see a way to accurately and efficiently address our current healthcare challenges in Japan and Asia, while providing superior healthcare.”