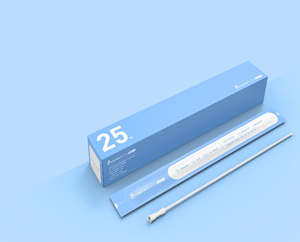 The new CE and FDA approved devices will be available from various distributors, wholesalers, and directly.

“We have also found that in addition to compact catheter solutions for active lifestyles, there is a rising need for affordable catheters that don’t sacrifice quality for cost, especially for the uninsured, underinsured, and those with high deductibles, and that’s why we created OneCath.”

OneCath has been introduced as the perfect complement to the CompactCath intermittent urinary catheter line. Available in both a straight and coudé tip in pediatric and adult sizes, OneCath is a high quality catheter at an affordable price point, designed to improve the lives of patients and help in an industry with continuously rising healthcare costs.

CompactCath is committed to eliminating the use of known carcinogens in the medical market place, and its products are 100% DEHP, BPA, and Rubber Latex free.

CompactCath Coudé combines the compact design of CompactCath, providing a smaller, easy to use, and discreet catheterization experience unlike traditional catheters. It is the only, pocket sized 16” long catheter with a coudé tip that fits in the palm of the hand and features a 100% non-touch system, fire-polished eyelets, silicone oil lubrication, and drainage control.

CompactCath Coudé is a welcome addition to the company’s product line, increasing the reach for those who require a curved tip to successfully drain their bladder. CompactCath Coudé was designed for easier insertion and is the first of its kind to feature the unique ‘Case Up, Tip Up’ design, which simplifies the catheterization process by reducing the need for visual dependency.

CompactCath chief medical officer Daniel Hong said: “With traditional coudé catheters, it’s difficult to know whether the tip is pointing in the right direction, which is crucial for proper insertion.

“We’ve alleviated this problem by simplifying the design of the catheter. As long as CompactCath Coudé is held in the vertical position, the tip will also be in the vertical, upright position, allowing for correct insertion and removal throughout the catheterization process. This creates a manageable and controllable procedure by greatly reducing discomfort and the risk of catheter associated trauma to the urethra. We have invented the first catheter which eliminates the need for a guide stripe as we commonly see on coudé catheters, simplifying the insertion process and allowing users to catheterize correctly and with confidence.”

The CompactCath line now has products to fit all lifestyles and budgets, and features the following:

Along with its product expansion, CompactCath is also focused on expanding its marketing and brand awareness campaign to reach catheter users and clinicians. The company will be supporting its products with its first ever above the line advertising direct-to-consumer campaign featuring dedicated TV spots, trade shows and magazine placements to increase the reach of consumers who can benefit from these new product additions. The expanded product line will debut at the 48th Annual Meeting of the International Continence Society in Philadelphia between 28 and 31August, this year.