A compact, remote BCI system will enable expansion of in-home study sessions, extending the geographic reach and number of individuals that can participate in BCI research 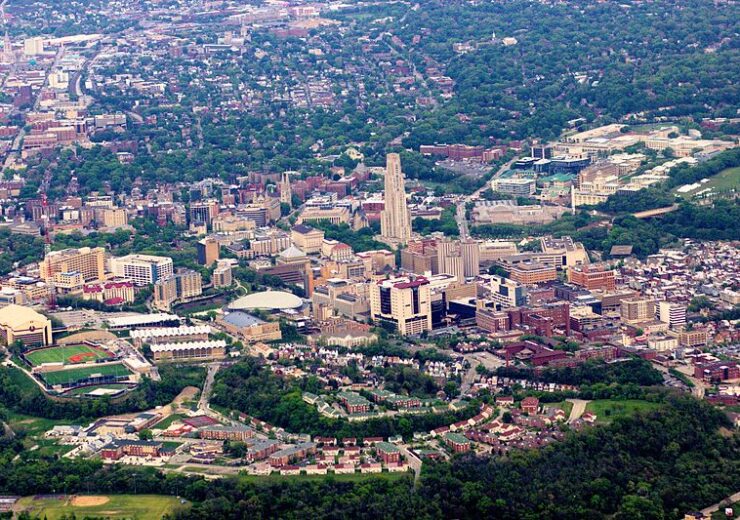 Aerial view of the University of Pittsburgh. (Credit: Sage Ross from Wikipedia)

Brain-computer interface (BCI) trials may soon be more accessible to a greater population of candidates living with paralysis, per a new partnership agreement between Blackrock Neurotech, a leader in implantable brain technology, and the University of Pittsburgh’s Rehab Neural Engineering Labs (Pitt RNEL). The agreement sets the stage for Pitt RNEL to scale future brain-computer interface (BCI) studies, enabling more people with remote BCI systems to participate in study sessions from their homes. Pitt RNEL is also creating a process to expand and improve participant recruitment, both remote and on-site, ultimately enabling larger studies with greater numbers of volunteers.

Since 2004, implantable BCIs have offered people with spinal cord injuries and other neurological disorders the potential to restore abilities. These BCI systems, comprised of miniaturized electronics, hardware, and machine learning software, decode and translate brain signals into digital commands, providing people with paralysis the ability to control external devices such as computer cursors or robotic arms.

Pitt was among the first research centers to implant Blackrock’s BCI in human participants and has since conducted pioneering trials on a range of BCI applications, including complex control of robotic limbs and restoring sensory feedback using electrical stimulation of the brain. However, participation in Pitt’s clinical trials has, up to now, largely been limited to people living within driving distance of the institution.

“Typical experiments require participants to come into our lab facilities on a regular basis, which is a successful model that will continue to be essential in pushing BCI science forward for years to come,” said Michael Boninger, professor of physical medicine and rehabilitation and investigator in the Rehab Neural Engineering Labs at Pitt. “However, home testing has become an important supplement to lab testing whereby we enlist study staff to attend sessions and transport parts of the lab equipment to the participant’s home to conduct testing. With this new initiative, we will develop a miniaturized and streamlined BCI system designed to work in people’s homes, while replicating the potential for complex lab-based experiments.”

Under this newly funded collaboration, BCI sessions using this new system will occur at the homes of people participating in the study, demonstrating that BCI research can extend outside of the greater Pittsburgh area. By reducing the challenge of study-related travel, researchers can test a broader population of participants and collect more diverse safety and efficacy data. Importantly, these in-home BCI trials are distinct from other at-home trials Pitt has conducted, where portable systems have been used independently by participants for limited testing and recreational purposes.

The Pitt RNEL group has previously shown that a portable BCI system could be successfully used at home to perform a variety of tasks by imagining the movement of a mouse cursor on the system’s integrated monitor, ranging from playing computer games and typing sentences to creating digital art.

“I first started using the portable system on my own in the summer of 2020, when COVID shut down testing at the lab,” said study participant Nathan Copeland. “I think in-home devices are the next essential step for getting BCI technology into the brains of the people that could have their lives improved by it. Whether it’s to draw cute cats, play video games, or as a primary tool for communication, the capability of using the system in the real world beyond the confines of a lab building will start changing lives and how people think about BCI.”

The expanded trials and compact system are an important step in Blackrock’s efforts to make the first BCI platform commercially available to people with paralysis. The technology, which has been chronically implanted in humans since 2004, has until now only been available to patients through research studies – but Blackrock believes it is ready for real-world use.

“At a neuroscience conference a few years ago, three participants in clinical trials of Blackrock devices sat on a panel and expressed a consensus that our technology addressed immediate needs in their lives,” said Marcus Gerhardt, CEO and co-founder of Blackrock. “Through this expansion of our partnership with Pitt, we will be able to connect with and learn from larger patient populations, with the guiding vision of making the technology available to as many patients as possible.”