Axilum Robotics announces that, two weeks after the CE mark, the company has received 510(k) clearance from the US Food and Drug Administration to market the TMS-Cobot TS MV, indicated for the spatial positioning and orientation of the treatment coil of the MagVenture TMS Therapy system. 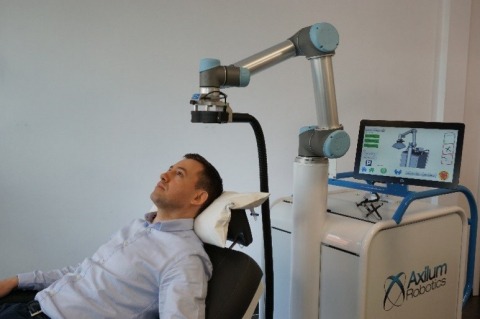 After having successfully developed and launched outside of the United States (OUS) the TMS-Robot, the first robot designed to assist health care professionals in delivering Transcranial Magnetic Stimulation (TMS), based on an invention of ICube laboratory in Strasbourg, Axilum Robotics has reinforced its expertise in medical robotics with the development of a new platform based on collaborative robot technology.

TMS-Cobot, the first medical device built on this platform, allows the company to offer an affordable and versatile system, thanks particularly to a proprietary optical tracking system, which allows the control in real time of the position, orientation and contact of the stimulation device, with patient head motion compensation.

The compatible MagVenture TMS Therapy System is indicated in the U.S. for the treatment of Major Depressive Disorder in adult patients who have failed to receive satisfactory improvement from prior antidepressant medication in the current episode. It was FDA cleared for this use on July 31, 2015.

Axilum Robotics’ TMS-Cobot TS MV will be distributed in the U.S. by MagVenture Inc. who is also the distributor of the MagVenture TMS Therapy System.

Transcranial Magnetic Stimulation is a rapidly expanding, non-invasive neurostimulation technique, particularly in the U.S. where TMS has been covered by health insurance since 2012 and there is an increasing awareness of its current limitations when the coil is held manually or attached to a passive holder, requiring the patient to stay perfectly still.

“TMS-Cobot will allow us to better address the needs of the TMS therapeutic market by providing an affordable solution to allow precise TMS delivery while relieving the operator from a demanding and time-consuming task and reducing the movement constraints on the patient. It is important for the user to maximize the chance to deliver the stimulation dose at the right location and our medical robots help make this possible!” explains Michel Berg, CEO of Axilum Robotics.

“We are very happy to partner with MagVenture Inc. who will distribute our device in the U.S. with its MagV TMS Therapy System. We are convinced that this robotized system represents a major step forward for the implementation of TMS” in the USA adds Michel Berg.