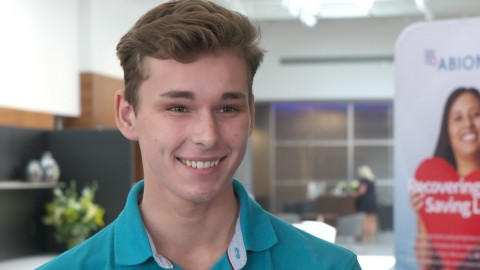 Image: Impella research benefits patients such as Tim Deits, who benefited from right side and left side support from Impella RP and Impella CP when he went into cardiogenic shock. Photo: courtesy of Abiomed, Inc.

Abiomed-sponsored research is augmented by two decades of independent physician-led research initiatives and a total of more than 550 peer-reviewed academic papers. Those studies have confirmed the hemodynamic benefits of Impella, which directly unloads the left ventricle and enables heart recovery. As a result, Impella is included in eight clinical guidelines¹ and has regulatory approvals that include European CE Mark, Japanese PMDA, and the highest level of regulatory approval from the US FDA, the PMA.

To date, Abiomed’s commitment to clinical research has supported:

One of the most complete and extensive post-market surveillance programs in the medical device industry, including:

The Impella Quality Assurance (IQ) Database, which collects, and shares with independent academic researchers for analysis, real-world outcomes data on nearly 100% of Impella patients from more than 1,300 U.S. centers. Data from the IQ Database helps continuously improve outcomes by, for example, demonstrating the benefits of placing Impella prior to revascularization in cardiogenic shock, as detailed in an Impella Update issued to physicians today.

The FDA-audited cVAD Study, a prospective study with one year follow up. The cVAD Study contributed to the development of the physician-led National Cardiogenic Shock Initiative which demonstrates that when best practices are followed, including the placement of Impella pre-PCI, survival in cardiogenic shock can improve from ~50% to 77%.

Partnerships with leading academic institutions to explore new elements of cardiac physiology such as the delivery of gene therapy vectors to failing hearts, algorithms to detect and predict patient-specific hemodynamics and how unloading the ventricle prior to reperfusion may trigger cardioprotective signaling.

STEMI-DTU pivotal randomized controlled trial, which will compare unloading the left ventricle with Impella to the current standard of care.

“A commitment to clinical research is ingrained in Abiomed’s culture because of our commitment to providing health care providers and patients with the highest quality devices, most cost-effective solutions and best practices for improving outcomes,” said Seth Bilazarian, MD, Abiomed’s chief medical officer. “Our patients are the motivation for all we do, and the goal of our industry-leading clinical research program is to help more patients recover their native hearts and go home to their families.”

Impella is the only FDA approved, safe and effective device for high-risk PCI, cardiogenic shock, and right-side support. Unlike the majority of FDA cleared medical devices, including the intra-aortic balloon pump and ECMO, Impella’s indications are backed by a randomized controlled trial, Protect II, demonstrating safety and efficacy.

More than 100,000 patients have been treated with Impella in the U.S., Germany and Japan, including Tim Deits, a teenager who went into cardiogenic shock after collapsing at his home in Huntington Beach, California. He was rushed to the hospital and treated with an Impella CP and an Impella RP, which allowed his heart to rest and recover.

“I am thankful to everyone who helped to research the effectiveness of the Impella heart pump. Without your hard work over many years, my son, Tim, would not likely be alive today,” said Tim’s father, Ted Deits. “Tim was initially given only a 10% chance for survival. Fortunately, the Impella RP heart pump arrived at our local hospital just weeks before Tim’s heart event, and I feel incredibly fortunate Impella was available to help save Tim.”