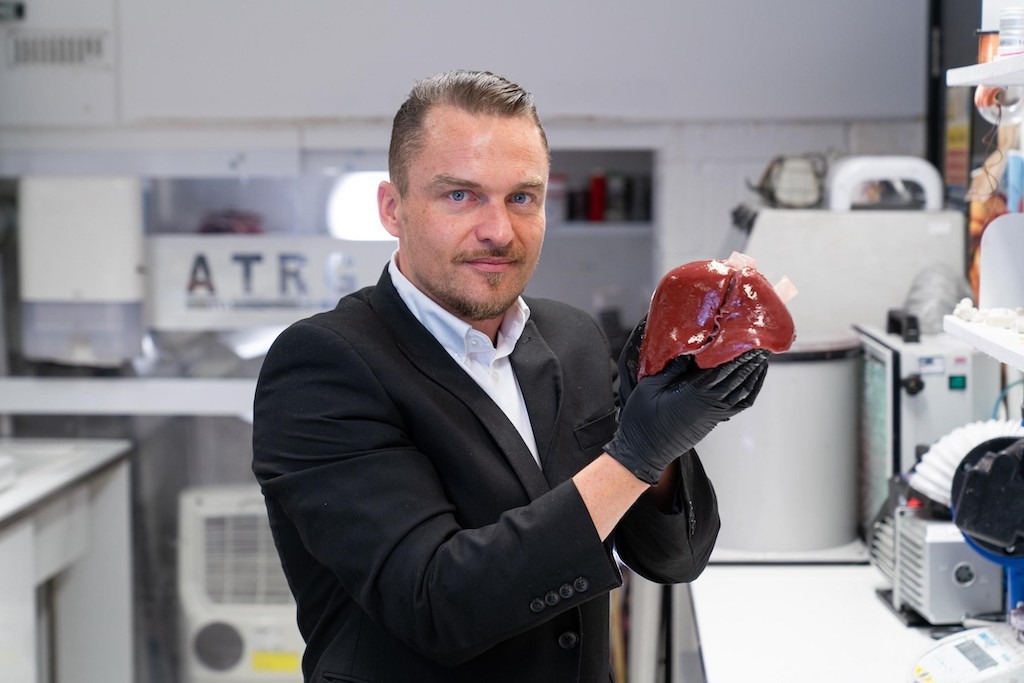 A liver resection is a complex surgery that can lead to several post-surgical complications – but a new 3D printed practice organ could help to improve success rates.

The chances of surviving a liver resection are fairly high, with a document from Oxford University Hospitals NHS Foundation Trust stating that 98 out of 100 patients will survive the surgery.

But the postoperative outlook is much more bleak, with a 5-year survival rate between 29% and 37% for those undergoing the procedure to cure a patients of cancer that has spread from another area of the body – the most common reason for a resection.

The reasons for many of the deaths is the return of cancer to the organ, but postoperative surgical complications also contribute to morbidity and mortality, which is why researchers are always trying to improve the surgical procedure.

Nottingham Trent University student Richard Arm came up with a novel way to do this – by 3D printing exact replicas of patient livers.

“Surgeons have an incredibly complicated job to remove tumours to save people’s lives,” said Arm, a PhD candidate in the School of Art & Design, and member of the Advanced Textiles Research Group (ATRG).

“But due to the limitations of existing technologies available to them, many surgeons only discover the true complexities of an operation when they are in the midst of the live procedure itself.

“Every patient is unique and has organs of different shapes, sizes and constructs, so there can be many hidden complications that they have to deal with.”

An academic paper giving a more in-depth and technical understanding of the project is in the works currently, with an expected submission date of July.

How does the 3D-printed liver help surgeons?

The model featured the tactile qualities of a real diseased organ, including imitation blood and different tissue hardnesses, such as the blood vessels, liver tissue and the tumour itself.

Made from synthetic gels and fibres, its purpose is to allow surgeons to use real surgical tools to practice endoscopies and laser ablation techniques, during which arteries are resealed by laser to prevent a patient bleeding out during surgery.

“This research shows how existing scan data and modern 3D-print processing methods can dramatically improve the preparation available before the first incision is even made.

“It could give surgeons increased confidence and may provide patients with improved outcomes, such as the increased retention of healthy tissue, reduced risk of infections and swifter recovery times.”

Dr Clarke, who provided his medical expertise as well as the anonymised patient scans, added: “This technology could give surgeons increased confidence in each procedure they undertake, by allowing them to better understand an individual patient’s anatomy and potentially reduce the risks to patients during what can be incredibly difficult, life-saving surgery.”

The research, which was funded by Nottingham Trent University’s Medical Technologies and Advanced Materials fund and the institution’s School of Art & Design, also considers the potential for 3D-printed livers as a teaching tool.

Arm believes the devices could also be used to teach trainee cancer surgeons in traditional and robotic tumour removal, and could improve robotic surgical interfaces and operator proficiency.