Inspired by technology explored to prevent bone loss in astronauts, the OsteoBoost belt was made to prevent osteoporosis using vibration 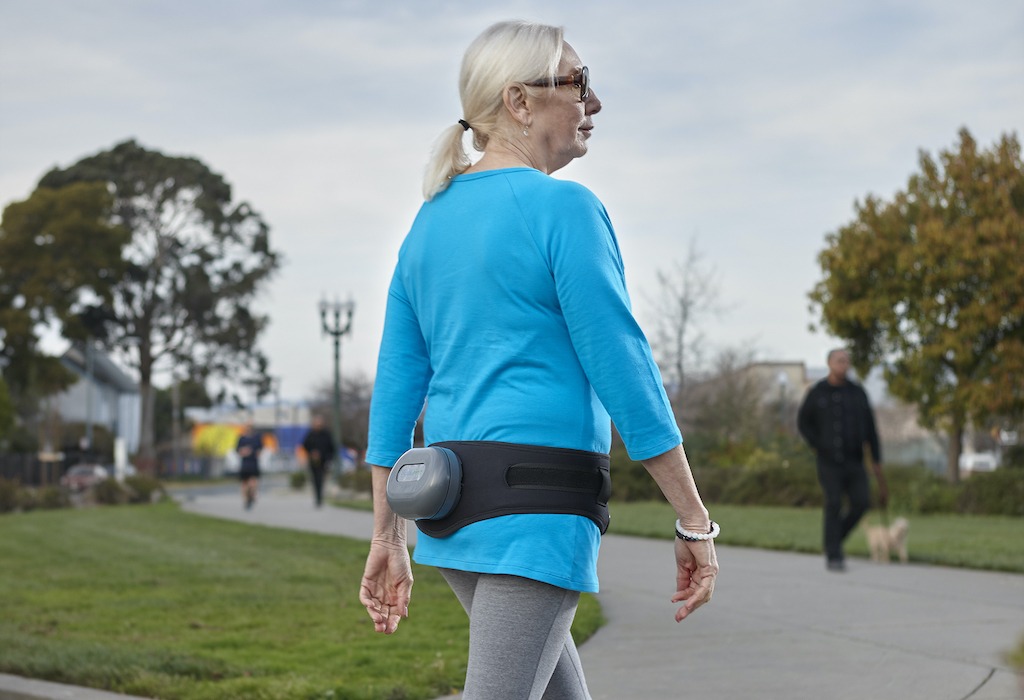 Osteoporosis is increasingly becoming an epidemic, with the International Osteoporosis Foundation reporting one in three women and one in five men will experience an osteoporotic fracture in their lifetimes. Peter Littlejohns speaks to Bone Health Technologies CEO Laura Yecies to find out more about a technology she believes could help people get ahead of bone loss by treating it with vibration to prevent the disease.

The musculoskeletal system is designed to be resilient against the physical trials and tribulations of our day-to-day lives, but in order to do this job well we have to maintain it by challenging it regularly with weight-bearing exercises.

Johns Hopkins Medicine elegantly describes the process of bone replacement as “a never-ending highway reconstruction project”, in which old bone is broken down and replaced daily with new bone.

But as we enter old age, our bones lose this ability to replace certain cells as fast as they degrade, and if that degradation is significant, it can result in osteoporosis, or its precursor, osteopenia.

Currently, the American Journal of Managed Care expects there to be over three million osteoporotic fractures a year by 2025, with related expenditures of $25bn per year.

The treatments currently include oral medications and injections that reduce the rate of resorption, or breakdown, in bones, as well as strengthening the bone that’s already there.

But one company wants to prevent osteoporosis before it occurs by providing patients with an easily-accessible, low-effort way to create the impact needed to stimulate bone to rebuild stronger – simply wearing a vibration belt.

Laura Yecies became CEO of this company, Bone Health Technologies, after holding a position on the board prior to her appointment, and says the company opened her eyes to the scale of the osteoporosis problem.

“When I was growing up, I’m sure my grandmother had osteoporosis. She shrank a lot and became hunched over.

“In college I worked in a nursing home where my dad was medical director, and patients were there either because of Alzheimer’s or hip fractures.

“That part I understood, but also, in the US there are 54 million people with low bone density, and half of all women will have a fracture [in their lifetime].”

It’s this need to prevent osteoporosis before it causes fractures that OsteoBoost, the company’s debut vibration belt product, was created to address, and if its recent FDA Breakthrough Device Designation and $2.5m venture capital raise are anything to go by, there’s a decent amount of confidence in it.

What causes low bone density, and how is it treated?

During childhood and adolescence, much more bone is deposited than withdrawn as the skeleton grows in both size and density.

Between ages 25 and 50, bone density levels tend to stay balanced, and after 50 the equation starts to work against the body, with less bone replaced than is resorbed.

As with many conditions, low bone density can be both prevented and combatted in an otherwise healthy individual through exercise and a well-balanced diet.

But According to the US Office of Disease Prevention and Health Promotion, less than 20% of adults perform the recommended amount of physical activity, including bone-strengthening exercises, required to keep bone density at a health level.

Once a patient reaches a loss of bone mass that constitutes osteoporosis, treatments exist, but Yecies says they have their downsides.

“We don’t have the equivalent of statins, or metformin”, she says, referring to two medications, one used in high cholesterol sufferers and the other to address type two diabetes – both of which are considered highly effective at reducing health risk with minimal side effects.

“What we have for osteoporosis is something that works, but has a lot of side effects, so we only use it by the time somebody has the disease.

“In the osteopenia phase, there’s nothing really.”

But there is increasing concern about their long-term safety, with patients often advised to take drug holidays to offset things like an increased risk of low-trauma atypical femur fractures.

How does OsteoBoost use vibration to prevent bone density loss before it causes osteoporosis?

Yecies admits that she was sceptical that something as seemingly straightforward as a vibration belt could tackle low bone density and prevent osteoporosis.

“I’ll be a little bit blunt, there was a stage where I was like ‘really? This vibrating belt can solve this problem? It’s too good to be true’.

“When I was getting recruited to the company, I asked ‘Why should I have confidence in this?’

“Then the CTO walked me through the research.”

The research story starts with NASA (National Aeronautics and Space Administration), which funded a number of projects in the early 2000s looking at whether standing on a vibrating plate could counteract the rapid bone loss experienced by astronauts in the weightless state they enter in space due to low levels of gravity.

Although there are some consumer-focused options available, they have little scientific credibility, and the vibration plates the sort of which were researched for NASA can run into thousands of dollars to purchase.

“They’re also very hard to comply with, because your knees are natural shock absorbers, so you have to stand on them doing nothing else with your knees locked,” Yecies adds.

“A belt is great because you can wear it while walking the dog, or doing the laundry, and it applies a vibration to the most vulnerable areas of the body – the hips and the lumbar spine.”

She expects the product to come in at “probably around $800”, but the decision on price won’t be finalised until the company can take OsteoBoost to market.

The device itself features an accelerometer and a pressure sensor, allowing it to measure the amount of vibration reaching the bones, which will be dependent on how much adipose tissue or clothing there is to navigate, and automatically adjust it to ensure it’s effective to prevent osteopenia or osteoporosis.

Bone Health Technologies is still conducting the pivotal trial that will spell success or failure for the product, but research conducted on animals and humans already shows a positive link between use of the device and improved bone density levels.

In its proof-of-concept study, the firm took 17 postmenopausal women and measured their NTX levels – a peptide found in urine known to be a reliable indicator of the rate of bone resorption.

They found that one 30-minute treatment reduced NTX levels by 14%, which Yecies says is equal to the effect of exercise and medication.

The results grabbed the attention of the US National Institutes of Health, which committed $2m in grant money to its pivotal trial now underway with 126 postmenopausal women with osteopenia.

What’s next for Bone Health Technologies?

A lot hinges on the pivotal trial, and that’s where Yecies says most of the recent investment – which brought the total funding figure for the firm to $4.5m – will be spent.

“When that trial is done around this time next year, we’ll go to the FDA for clearance,” she adds.

In the meantime, the company is hoping to draw as many conclusions as possible from the study to better understand the usefulness of OsteoBoost, like the question of whether it can complement exercise to increase bone density further.

“Our hypothesis is that people who don’t, or can’t exercise, will benefit more from the device,” says Yecies.

“But we also think there could be potential improvement in people who are regular exercisers.”

In the latter scenario, she envisions people who exercise during the week, but don’t perhaps stimulate bone repair every day.

In order to determine how the two approaches can combine, the study is tracking the amount of exercise performed by participants.

Another important metric is utilisation – how the amount of usage informs the impact on bone health – and Yecies says the current data shows more than 80% compliance with the programme given to participants.

Once this data is acquired, the plan is to integrate it with a companion app that will help users track their usage and encourage them to pick up the belt more often if they’re behind on the schedule.

The first indication Bone Health Technologies is hoping to get clearance for is post-menopausal women with osteopenia.

But further studies are planned for that particular condition, as well as the more serious osteoporosis in both men and women.

In terms of the business model, the OsteoBoost will be marketed directly to patients, but will be available on prescription, most of which Yecies expects will come from primary care doctors.

She also hopes to take advantage of the developing telehealth industry though, with patients able to get an OsteoBoost belt prescription after a virtual appointment with a doctor.

Over the longer term, the company is looking at using the same bone-strengthening principles it hopes will be validated in its pivotal study to create devices for other parts of the body – but right now it isn’t disclosing which parts.

Ricoh gets FDA approval for CMF and orthopaedic anatomic modelling