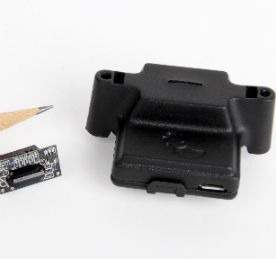 Spectroscopy techniques are easily deployed, scalable for high-volume use, and accessible across a range of form factors and price levels. Here, we examine, in a lab setting, how absorbance spectroscopy can be used to characterise haem proteins.

Haem proteins play many vital roles in mammalian physiology, including the storage and transport of oxygen and the transport of electrons in the mitochondria, where the high-energy molecule ATP (adenosine trisphosphate) is synthesised. The presence of the haem prosthetic group in these proteins gives rise to UV-Vis absorbance spectra that vary with the state of the haem group. In this article, we focus on the visible response of the haem group using the compact Spark spectral sensor to measure absorbance spectra for the haem proteins haemoglobin, myoglobin and cytochrome c.

Haem proteins are metalloproteins with an iron atom found at the centre of a porphyrin prosthetic group. The haem group is bound to the protein and is required in order for the protein to carry out its critical biological function. The metalloproteins haemoglobin and myoglobin are very similar proteins that function to store and transport oxygen in mammals. The metalloprotein cytochrome c plays a critical role as part of the electron transport chain in mitochondria where the ATP that powers life is synthesised.

The haem groups found in metalloproteins generate absorbance bands that vary based on the state of the haem group. These spectral changes make UV-Vis absorbance spectroscopy a very powerful tool for studying haem proteins. Absorbance measurements can be used to study changes to critical protein parameters such as protein conformation, and to provide information on the binding and oxidation state of the haem prosthetic group.

To demonstrate this, we used the Spark-VIS spectral sensor with direct-attach sampling accessories to measure the visible absorbance spectra for the metalloproteins haemoglobin, myoglobin and cytochrome c.

The Spark-VIS is the first Ocean Optics spectral sensor to use a solid state optical component in place of a traditional diffraction grating. Spark bridges the spectral measurement gap between diode filter-based devices and CCD-array instruments such as miniature spectrometers. The Spark’s unit size and cost are comparable to that of a less robust RGB filter diode detector, but with the ability to perform full spectral analysis at 380–700nm. Its detection limits and response make Spark useful for absorbance, fluorescence and colour measurements in educational, lab and bedside settings.

At the heart of Spark is a proprietary solid state component packaged within a protective enclosure or available as a basic electronic component. In the latter format it is easy to appreciate how such a device can be integrated into a POC device for blood analysis.

Haemoglobin (Sigma H-7379), myoglobin (Sigma M-0630) and cytochrome c (Sigma C-3131) solutions were prepared in water at a concentration of approximately 1mg/dL. The samples were diluted as necessary to provide spectral data below 1AU and pipetted into disposable cuvettes. We made absorbance measurements using the Spark-VIS and direct-attach cuvette holder with white LED module. Integration time was set at 3.5ms, with 50 scans to average and the boxcar smoothing width at 10ms.

The spectra measured for these proteins would be very different if the iron atom was in a different oxidation state or had oxygen or some other gas bound to it. The ability to study the state of the haem group using UV-Vis absorbance spectroscopy makes it a powerful technique for education, research and clinical diagnosis.

Jaundice is a common and often harmless condition in neonates. However, because there is a risk of developing jaundice-related brain damage, blood bilirubin concentration (the indicator of jaundice) is often closely monitored. Jaundice is indicated by the characteristic yellowing of the skin (and the whites of the eyes) and is caused by the presence of bilirubin, an orange-yellow pigment formed by the breakdown of haemoglobin in the liver.

Bilirubin has a characteristic spectral response with absorption centred at 450–460nm. The spectrum shown is for a calibration standard for a working range up to bilirubin values of ~20mg/dL.

The bilirubin may be measured in blood samples, in body waste products and non-invasively through the skin. With the full spectral response of Spark, bilirubin can be distinguished from potential interferences such as haemoglobin and blood-based derivatives.

Typically, bilirubin concentration in neonates is determined from a blood sample obtained by a heel stick, often up to three times a day. This method causes discomfort to the patient and a delay in treatment while lab results are pending. The ability to measure bilirubin non-invasively through the skin reduces stress on patients and makes it possible for physicians to make on-the-spot treatment decisions.

As an alternative, researchers developed a new spectroscopic technique – low coherence spectroscopy (LCS) – that allows for measurement of blood values (including bilirubin) inside a single blood vessel, without any influence from the surrounding tissue. Using a fibre optic probe and spectrometer, bilirubin can be detected painlessly through the patient’s skin. The first in-vivo measurements with this technique were very promising.

Also, the researchers observed that LCS is sensitive to changes in tissue scattering that are related to the morphology and organisation of cells. The latter offers new opportunities for the non-invasive diagnosis of cancer.

Absorbance spectroscopy is a powerful tool for characterising proteins and other biological samples. In the case of metalloproteins, the UV-Vis absorbance spectra provide detailed information about the haem prosthetic group required for the proteins to carry out their critical biological functions.