Major laser – the miniaturisation of the machining process

As the demand for miniaturised parts continues to strengthen across the medical sector, lasers have assumed a pivotal role in the machining process. Greg Noone talks to Professor Duncan Hand, director of the Engineering and Physical Sciences Research Council Centre for Innovative Manufacturing in Laser-Based Production, about the current state of the field. 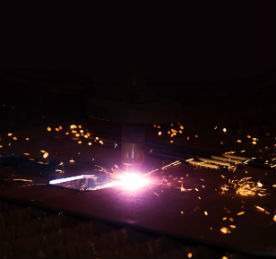 On 6 January 1964, Laura Shaw was admitted to the University of Oregon Hospital with an ischemic ulcer and gangrene on three of the toes of her left foot. A femoral angiogram conducted shortly afterwards revealed an atherosclerotic obstruction in the 82-year old’s left leg that almost entirely obscured the lumen of the affected artery. Common practice of the day dictated immediate amputation of the affected limb below the knee. Shaw refused, and was subsequently placed into the care of Dr Charles Dotter.

A radiologist by training, Dotter was also an engineering obsessive. He had his own ‘conceptual trademark’, a crossed wrench and pipe, signifying his ambition to achieve the same results with blood vessels as a plumber would a drainage system. Dotter’s medium, however, would be the catheter. The radiologist could often be spotted using a blowtorch to craft new catheters out of unorthodox materials – vinyl insulation, guitar strings, a Volkswagen speedometer cable – in his personal race to prove their superiority over the scalpel. When he was informed of Shaw’s symptoms, Dotter was convinced that she could avoid open vascular surgery if he could insert a small balloon into the lumen of the affected artery via one of his catheters. Having ruled out amputation, the patient consented to the procedure.

Everything went according to plan; almost immediately, Shaw’s pulse and blood pressure were restored to normal levels in her left leg, and she remained ambulatory for another two years before dying suddenly of pneumonia. Similar interventions on 15 other patients yielded promising results and, by the 1970s, the procedure was being adapted to coronary arteries. Problems began to emerge, however. By inflating the balloon and compressing plaque against the sides of the artery, the arterial wall itself weakened in some cases, triggering restenosis. The introduction of the stent – an expandable wire mesh that holds the arterial wall in place – in the 1990s would largely overcome this problem.

Its continued success would not have been possible without the use of industrial lasers. Many stents are made of an expensive shape-memory alloy called Nitinol, and are so small that any flaws in the manufacturing process resulting in rough edges or burrs – all of which could potentially trigger restenosis – can only be corrected by spending hours of time manually brushing or sandblasting the instrument under a microscope. By using a short-pulse laser to cut the stent into shape, these mistakes are largely avoided.

“Essentially, the laser is a form of energy that you can control really, really well,” says Professor Duncan Hand, director of the Engineering and Physical Sciences Research Council (EPSRC)’s Centre for Innovative Manufacturing in Laser-based Production, and deputy head of the engineering school at Heriot Watt University. “You can strongly localise that energy in time and space. If you like, you can make very short pulses of light or longer ones, depending on how the laser system is set up, but you can control exactly when that energy is delivered. It could be in a pulse that’s only a few picoseconds in length that can be focused on a spot only microns across.”

Most of Hand’s time is divided between research into the manufacturing, sensing and medical applications of lasers. His work last shot to national prominence in April 2016, when he was interviewed by BBC News about his department’s research into anticounterfeiting laser holograms. The enthusiasm on display while Hand was interviewed in his lab last summer has hardly dimmed: “It still seems quite incredible to me that you can take photons and actually use the energy in them to change materials and make practical things.”

Much of Hand’s work revolves around finding and assessing applications for lasers in machining roles related to the production of medical devices, the most obvious of which remains cutting materials down to size. The difference in quality achieved by lasers over and above conventional machining processes is keenly visible when cutting the thin walls of metal tubes used in endoscopes and arthroscopic instruments. One of the most commonly used methods is wire electric discharge machining, wherein material is removed through electric sparks. However, wire electric discharge machines are limited in the geometry of the cuts they’re able to make, can occupy up to 1.1m² of floor space and require considerable amounts of maintenance. Lasers, meanwhile, can achieve a much finer cut and, while individual machines are a lot more expensive to purchase, they require less floor space and are easier to maintain.

Another key role for lasers in manufacturing lies in welding. Advanced medical devices like pacemakers often contain sensitive and delicate electronics. By welding shut the device using a laser, a medical OEM can guarantee that it remains hermetically sealed in a fashion that is almost seamless. Lasers also preclude the need for fillers in welding, which allows the joining of different materials without contamination. Most important, perhaps, is their ability to weld extremely delicate materials together in a precise and stable manner. “The reason lasers are so good for this is because you can have quite a limited total heat input,” explains Hand. “You can melt a very small volume of material just at the joint and make a much more precise [weld].”

Not only are industrial lasers increasingly used to weld tiny and thin metal parts together, but interest in the ability of longer-wavelength lasers in clear-on-clear polymer and even glass welding is also growing. It’s an important development for a sector where miniaturised parts are in hot demand.

“Glass is a really nice material to use in medical devices, but taking a piece of glass and cutting fine shapes in it is not easy to do,” Hand continues. “There are some mechanical grinding-type technologies you can use, but lasers make the task an awful lot easier. Equally, we’ve recently developed processes of welding glass and metal together. That allows you to put very dissimilar materials together, again, thanks to having the heat localised to a very small volume.”

Laser drilling also remains one of the most accurate methods by which medical OEMs can machine tiny holes – some with diameters as small as a fraction of a millimetre – into surgical needles, angioplasty balloons and drug delivery systems, among other medical devices and tools. In the case of drilling holes into polymer tubing, the use of lasers is the only method that remains friendly to the manufacturer, allowing the device manufacturer to maintain the integrity of the material being machined without recourse to the costly post-processing work associated with mechanical drilling.

While industrial lasers can accomplish drilling, welding and cutting to a high degree of accuracy, there isn’t a lot of overlap between certain laser types across these tasks. Carbon dioxide (CO2) and Yb-fibre lasers, for example, may be used to cut and weld materials for medical devices but aren’t very useful for drilling holes. Meanwhile, ultrashort pulse-length lasers can be used for cutting and drilling materials, although they’re not readily used to drill high aspect-ratio holes. That task often falls to pulsed Nd:YAG lasers.

“Unfortunately, in some cases, lasers aren’t quite as flexible as you might wish,” Hand admits. “I’ve gone through exercises a few times on looking at roadmapping for lasers and, of course, the key priority identified is a completely flexible laser that will allow you to tune all the parameters. However, that has not been realised, and I’m not sure whether it’s possible.”

This is not to say that the prospect of buying several different types of lasers is necessarily a bad thing for medical OEMs and larger manufacturers. As the capabilities of the technology have grown, so has the potential for economies of scale to be attained by using the equipment among all interested parties. “One thing that has happened is that the lasers themselves have become a lot less expensive,” explains Hand. “Then it becomes not so unreasonable to have a couple of different lasers in your system to do those different processes.”

According to Hand, the reason most of the costs have come down in the sector is down to investment in research and development by the telecoms industry, in particular into diode lasers and optical-fibre technology, which are the building blocks of modern, high-power industrial laser systems. With the cost to produce the laser itself having come down, it is no longer beyond the realm of possibility for medical OEMs to purchase the requisite variants they need to complete any necessary machining tasks. The alternatives to lasers also make this an appealing option.

“There are places where conventional techniques work well and are what you want to use,” he says. “For example, conventional photolithography is widely exploited to produce planar structures and process thin layers of material. If you need to build up a structure in that way, such as in microelectronics, that makes sense. If you want to move to something that’s a bit more 3D, then a laser process makes it easier to cope with that.”

Hand sees the future of lasers along these lines: as the machines get cheaper, their use among manufacturers is likely to increase, as will the number of finely machined devices available for more complex applications in medicine and surgery. As surgery becomes less invasive, laser machining is ideally suited to drilling, welding and cutting the delicate features that are essential to realising that vision of medical treatment.

“Lasers open up possibilities for doing things that are either difficult, expensive or impossible to do in any other way,” Hand concludes. “That’s one of the big drivers of our research: thinking about how we go from a prototype device that costs a huge amount to put together, to actually being able to manufacture lots of devices at a low cost but, perhaps, still including some tailored capabilities in those devices.”