Technology intended to help patients recover motor control after a stroke has come on leaps and bounds in recent years, with a slew of new devices created to help regain limb control being developed for the market. Greg Noone talks to Axinesis CEO Eric Hanesse about how the Belgian start-up’s REAplan robot has been designed with the latest manufacturing advances in mind. 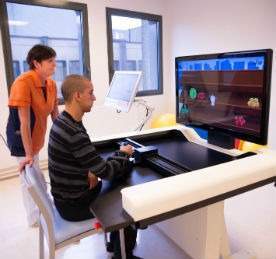 Having strolled awhile down the backstreets of Liege in Belgium, Henri Vieuxtemps began to hear a violin faintly playing through the usual hubbub. A concert violinist of some renown for many years, Vieuxtemps knew he was listening to a comparable, if raw, talent. The old man knocked on the door of the house the music was coming from, and so began the tutelage of Eugène Ysaÿe, one of the greatest violinists of the 20th century.

Classical music is built upon such encounters – chance meetings that trace a lineage between one player and the next. Vieuxtemps trained with Jean François de Tiby, who himself was taught by the great de Bériot, who studied under Viotti, who learned from Pugnani, who played alongside Bach. Unlike these antecedents, however, by the time he met Ysaÿe, Vieuxtemps’s career was largely over; where once he commanded the attention of sold-out concert halls in London, Paris and New York, a paralytic stroke shortly before the meeting meant he could no longer use his bow with any accuracy.

By continuing to teach, Vieuxtemps had adopted a personal workaround for his talent that demonstrated a rough acceptance that his arm would remain impaired for the rest of his life. Almost a century and a half later, that prognosis has improved little for stroke patients. The occupational treatment available for most of today’s patients involves arduous physical therapy that rarely results in full recovery once it ends. Instead, the net result is largely an improvisation of motor skills: relearning a few old movements here and there, but using coping strategies to allow the completion of a few household activities for the most part.

The tragedy of this arrangement, common even to those patients with access to advanced healthcare, is that there exists a window of opportunity wherein the recovery of motor skills is actually possible. After a traumatic event like a stroke or a haemorrhage, the brain, thanks to a phenomenon known as ‘neuroplasticity’, is able to recreate the connections that enable sophisticated movement of the upper and lower limbs. This period extends, on average, to about three months, but external stimuli – in other words, a physical therapy regime – is required within that time to spur the brain to repair itself.

Up until now, such therapy immediately after a stroke has eluded most victims. However, with the advent of robotic aids that can host the necessary tasks to strengthen recovery and measure progress within it, the possibility of a full recovery is suddenly a real prospect.

"In terms of the number of strokes in adults, we’re talking about 15 million cases a year worldwide," says Eric Hanesse, CEO of the med-tech start-up Axinesis. "A third of those cases, around five million, experience lingering impairment. In combination with physical therapy, robotics can bring a real, incremental re-education for patients."

Out on a limb

The theory that the brain has the ability to rewire itself was mooted as early as the 1780s, when Italian scientist Michele Vicenzo Malacarne discovered that the cerebellums of trained dogs and mice contained more folds than their wilder siblings. Malacarne’s research gained some credence among the European scientific community, but interest largely waxed and waned until the early 1990s.

It took additional time to realise that the movement tests the animals were being subjected to indicating that neuroplasticity had occurred – sometimes comprising up to 600 reaches of a limb per session – were not being fully replicated in human stroke patients, who tended to spend most of their time after a cerebrovascular incident lying prone in a hospital bed. According to one US study, the rehabilitation sessions they did undergo with a therapist resulted in an average of just 32 reaches per session – not enough to trigger any repair work inside the brain.

We’ve now got a very good answer to the question of economics that surrounds the use of robotics in stroke therapy.

Beginning with comparisons of conventional therapy techniques and robotic aids such as the MIT-MANUS device in the mid-1990s, robotically aided rehabilitation promised a way to bridge the gap between practicality and the strenuous animal testing regime. Such devices not only assist the patient in repeating upper-limb movements that might be difficult to achieve with only the therapist present but also better chart a subject’s progress during their recovery.

Working in concert with Dr Julian Sapin, a researcher in the field of rehabilitative robotics, Hanesse and the company are in the final stages of bringing the ‘REAplan’, a next-generation stroke-rehabilitation device, to medical centres across Europe. In this respect, the definition of ‘robot’ is unorthodox: the REAplan effectively resembles a giant computer, equipped with a joystick, hooked up to a giant screen. The intention is for the patient to guide a marker on the monitor with their affected limb in game scenarios. The format encourages repeatability, ideal for engaging neuroplasticity in the brain of the patient, but the device also provides assistance according to the patient’s specific needs. Every therapy session sees the patient accompanied by a trained nurse.

"What you can find with robotic systems is the ability to complete a significant number of movements for patients that are matched by follow-ups with therapists," explains Hanesse. "This is important, because a patient will work with a therapist more closely than with the device alone. This allows something like one 20-40 minute session a day – a period of great significance if one considers what the patient achieves with the therapist alone."

The REAplan is also intended for use in the treatment of cerebral palsy. The length of time where neuroplasticity can be exploited to enhance motor skills is significantly longer here. "If an incident is inflicted upon the brain during birth, that can result in damage equivalent to that inflicted by a stroke in an adult," says Hanesse. "However, you’ve got much more time to accompany the child during physical rehabilitation. This is something that can happen up to 12 or 13 years old."

For Axinesis, the results found in young patients undergoing an hour on the REAplan have been hugely encouraging. "We see really astonishing results for children through our immersive feedback system and its integration with the large screens of the REAplan," says Hanesse.

Where the REAplan hopes to distinguish itself from its competitors in the marketplace is in its relatively high patient throughput. This is mostly achieved in the time it takes to recalibrate the machine for a new user: whereas most others take a relatively long time to be finely tuned to the patient’s requirements, a patient on the REAplan can accomplish this in just one minute.

"This means that we’ve now got a very good answer to the question of economics that surrounds the use of robotics in stroke therapy," says Hanesse. "Previous variations of these devices were, I would say, more dedicated to research, because the cost was significantly higher and the practicality of using such a device with patients was a lot lower than what we have now."

Axinesis’s choices for the REAplan are indicative of a choice manufacturers have to make in the early stages of designing stroke-rehabilitation robots: whether to enhance the complexity of the repetition exercises that could be hosted by the device, or simplify them and thereby cut the calibration time for each patient to enable wider use.

The flipside of this equation is best embodied in the Hocoma ArmeoPower, evocatively described by The New Yorker contributor Karen Russell as resembling "the love child of a large dental chair and the Nintendo Power Glove".

Unlike the REAPlan, the device is able to facilitate a wide range of interactive games of the sort one might realistically encounter on a consumer games console. In a study at Johns Hopkins School of Medicine, documented by The New Yorker, chronic stroke patients helping to set the trial protocols for the testing of a game to be matched with the ArmeoPower expressed broad satisfaction with the device. Hanesse, meanwhile, retains reservations over the choice of interface.

"Their choice is different, because [Hocoma] are using a 3D field for re-education," he explains. "We’ve got people working with a full extension of the arm [with the REAplan], which is really close to their 3D concept. That, for us, is the best thing technology-wise for a good re-education process, because it automatically becomes available for a larger number of patients. However, with a 3D system, the time required for the set-up of patients on the device is not cost-effective."

In that sense, the capabilities of the REAplan – according to Hanesse – present a much more mainstream and cost-effective solution for stroke rehabilitation. "We need to be where patients will be, in centres that possess strong medical back-up and follow-up capabilities," says Hanesse. "We are now checking how we can progressively move the REAplan out of rehabilitation centres in hospitals to local town therapists or even the homes of patients." And with that, the prospects of so many stroke patients battling with physical impairment will brighten.