Brain-controlled motion devices have been making headlines over the last few years, promising greater motor control for amputees and the possibility of restoring some function to the limbs of paraplegic patients. Sarah Williams looks at two promising new developments in the field, speaking to Dr Thorvaldur Ingvarsson of leading orthopaedics company Össur, and Dr Zoran Nenadic, Dr Christine King and Dr An Do from the University of California, Irvine. 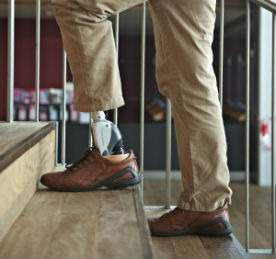 The amputee who feels phantom limb pain or the paraplegic whose leg rests unused: such interruptions to the body’s connections emphasise the complexity, fragility and ongoing mystery of the nervous system. But as digital connectivity advances, the possibility of rewiring these broken connections becomes increasingly feasible.

Nowhere does the overlap between technology and anatomy seem closer than in the field of brain-controlled motion, where scientists, engineers and doctors are syncing human tissue with man-made devices.

One such breakthrough was unveiled by Icelandic orthopaedics company Össur earlier in 2015, in the form of a mind-controlled prosthetic leg. After a successful year-long ‘first-in-man’ trial on two lower-limb amputees, the system was shown to allow the wearer to operate it simply through thought. Myoelectric sensors were implanted directly into the residual muscle of the amputated leg and wirelessly connected to one of Össur’s existing bionic legs. Picking up signals sent through the body by the brain, the sensors allow the prosthetic to respond to the wearer’s thoughts, just like a healthy leg.

Leading the project is Dr Thorvaldur Ingvarsson, Össur’s EVP of research and development, who performed the implantation surgery on the two test subjects. Ingvarsson puts the success of the new method down to the relative simplicity of embedding the sensors in residual muscle, rather than attempting to connect them to transplanted nerve tissue.

"If you look at able-bodied individuals, it is obvious that they can control their walk by conscious and unconscious movement, and react to stimuli as they go along," Ingvarsson says. "In amputees, this connection is lost. Our answer to that ten years ago was to introduce a bionic prosthetic line to the amputee population, which uses sensors and artificial intelligence to react to the surroundings. However the amputee still has to ‘help out’ the prosthetic.

"The obvious idea, then, was to connect the body to the prosthetic, and through the years, scientists have been trying to do that by connecting a nerve to a device: when you react to stimuli in your surroundings, the brain sends signals to the spinal cord and then to the nerve. The nerve then animates the muscle. We decided that we could actually use the potential in the muscle and take signals directly from there. It’s very simple, really – but it works."

A short, minimally invasive procedure performed under local anaesthetic, Ingvarsson compares the operation to inserting an intravenous catheter. However, choosing the correct area of muscle for the sensors is vital, given that some segments are missing or damaged. Fine-needle electromyography is therefore first used to verify muscle function.

After Ingvarsson’s patients had recovered and healed from the operation, they were asked to test the leg on a number of terrains and to perform actions such as moving parts of the foot while sitting.

It is at this point that the significance of Össur’s device becomes clear. Existing weight-bearing bionic prosthetics simply react (as the name would suggest) to the weight placed upon them, adapting to the user’s gait and speed. Össur’s new system, by contrast, allows the prosthetic to respond to the wearer’s conscious and unconscious commands from any position. Asked to move his toe, the patient could do exactly that, mastering such commands right from the beginning.

"It took minutes, not hours," Ingvarsson says. "That was something that was so astonishing about this: how simple it was."

The next steps will include trialling the system on a wider range of patients within an ‘everyday living’ setting, to establish how much training is needed to make full, safe use of the control mechanism. But Össur plans to integrate another very significant development into trials next year.

We decided that we could actually use the potential in the muscle and take signals directly from there.

Currently, the myoelectric sensors transmit information in one direction, from residual leg to prosthetic, but Ingvarsson’s team next hopes to incorporate a sensory feedback loop. This would essentially convey information concerning the prosthetic’s interaction with the ground and its surroundings back up into the user’s brain, providing something approaching ‘feeling’ in their feet. As well as handing further awareness and control to the patient, such a development could have implications for users with phantom-limb pain, which has been linked to lack of perceived ‘use’ of the missing limb.

So, if science can connect a patient’s brain to a prosthetic leg, what about reconnecting it to their own paralysed leg? Scientists at the University of California, Irvine (UCI), have achieved just this feat, completing a proof-of-concept study in which a paraplegic man with a spinal cord injury (SCI) was able to walk over ground using brain control – the first instance of this being achieved. The 26-year-old subject, who was injured five years ago and has no motor function in his lower extremities, was able to control his legs to walk down a 12ft course.

Based upon a brain-computer interface (BCI), the system essentially replaces the spinal cord in sending commands to the area requiring motion.

Within the leg, movement is achieved through existing technology: a functional electrical stimulation device (specifically the Parastep) that stimulates the various muscle groups in the leg needed to perform actions such as sitting and standing.

It is the passage of the brain signal down into this device that demonstrates the ingenuity of the project at UCI: an inventiveness spanning science, medicine and engineering that the study’s senior author, Professor Zoran Nenadic, credits to the multidisciplinary nature of his team. Nenadic explains that the project developed from work the lab undertook in early 2010, using a virtual reality environment to test BCI technology.

"We used virtual reality because it a safe environment – there is very little risk – and we first did this on able-bodied subjects: mostly our own lab members," Nenadic says. "We were able to connect the brain to a kind of video game, where the goal was just to think about walking and move an avatar, and then, when necessary, make stops. It’s a fairly simple game, but if you’re playing straight from the brain using brain waves, it’s not so trivial."

The results displayed a clear link to brain control, and the team extended its tests to a small patient group with SCI, carrying out further test scenarios until arriving at the walking proof-of-concept trial in question.

In using the BCI system designed for this trial, the test subject undertook training using the avatar, to familiarise himself with it and so that a model for his ‘walking’ thought process could be captured. An algorithm was then created to translate these brain signals into physical triggers.

It gives people strength and hope, and they feel much more enabled to walk and control their surroundings.

The first author on the study, Dr Christine King, who worked on the BCI, explains how the system processes brain signals detected by the wearer’s electroencephalogram (EEG) cap.

"The EEG can take those signals, send them though an amplifier, digitise them and send that to a computer. All this happens wirelessly in the system we built. The computer then uses the little training model of you ‘walking’ versus ‘not walking’, and once it determines that you’re ‘walking’, it sends those control signals to a microcontroller and initiates the simplified act of walking for the patient. This allows it to form ‘left step’ and ‘right step’, given the way the patient walked within that particular device."

Safety was a priority, King says, with built-in relay switches and preprogrammed controls to ensure that no false positives would trigger the legs to move at the wrong time. The subject underwent physical training to rebuild muscle strength and first trialled ‘walking’ while suspended over the ground. In the proof-of-concept study, he used a body-weight support system.

BCI technology was worn outside the body, connecting wirelessly to an external computer; but the team has ambitious plans for further developing the system, reveals study co-author Dr An Do.

"If you look at the video associated with the publication, you’ll see that when [the subject] starts walking, he immediately looks down at the ground at his feet: he really has no sensation of where his legs are because of the spinal cord injury," says Do. "So I think it’s important to come up with the feedback, actually providing sensation."

One of the team’s goals is to develop a fully implantable version of the technology, and this could provide an opportunity for integrating such feedback, Do explains.

"It opens up the possibility for us to provide electrical stimulation to the sensory parts of the brain," he says. "So you can imagine that if you put sensors on the legs and the foot, for example, every time he takes a step, the pressure on the bottom of his foot can be translated into some kind of electrical stimulation pattern for the brain, to provide this artificial sensation."

Using such a methodology, the system could perform with a higher degree of control, delivering a more intuitive and natural restoration of walking altogether. However, successfully creating such a system and bringing it – and the associated surgery – into approved use is likely to be a matter of decades rather than years.

For this reason, a second objective in the short term is to create a more portable and user-friendly version of the current system for further tests in the lab, the clinic and, eventually, the home. As with Össur, demonstrating that the BCI is able to work on a wider patient population will be another important milestone.

In fact, UCI’s technology has the potential to help a broad range of patients indeed. Whereas exoskeletons do not require a neurological link with the wearer beyond manual controls, the BCI approach associates brain function with the movement induced in the limbs. This, along with the physical muscle stimulation the method entails, means that it could potentially serve as an interventional measure to help recovery of motor control in populations as diverse as stroke and traumatic brain injury patients, and indeed, patients with varying degrees of SCI.

Össur’s sensor-driven method also offers potential health benefits to patients, with muscle mass in the test subjects’ residual legs found to have increased during the trial.

But as developments progress in Iceland, California and across the industry, another less tangible but extremely significant benefit to future users should not be overlooked, Ingvarsson says. "Something that should not be forgotten is the psychological part of being able to control your leg by your mind," he says. "It’s something the patients were actually really emotional about; they were really pleased that they had the possibility of being able to control the ankle and being somehow connected to the device.

"It gives people strength and hope, and they feel much more enabled to walk and control their surroundings."