A new robotic glove could soon help people suffering from loss of hand motor control to regain some of their strength. Oliver Hotham speaks to project head Conor Walsh and mechanical engineer Kevin Galloway about how silicone elastomers are helping medical device designers develop products that are more comfortable and can better mimic nature, and what the research means for the business of medical devices. 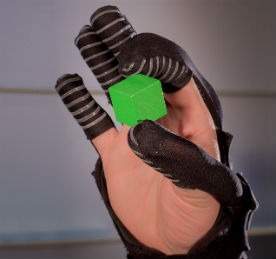 For patients suffering from muscular dystrophy, amyotriphic lateral sclerosis (ALS) and spinal injury, it’s the lack of mobility – and the loss of the independence that comes with it – that most impacts the quality of everyday life. From picking up a cup to cooking, cleaning or getting dressed, tasks that most take for granted become exhausting.

A team of pioneering researchers at Harvard, however, might be onto a solution. Working out of the Wyss Institute for Biologically Inspired Engineering and the John A Paulson School of Engineering and Applied Sciences, they have developed a soft robotic glove that, using customisable actuators tailored on a patient-by-patient basis, might give hand-impaired individuals a chance to regain their mobility.

Leading the project is Conor Walsh, an assistant professor of mechanical and biomedical engineering at Harvard with a specialty in developing technology that combines mechanical engineering with human physicality. He has worked on a soft exosuit that helps soldiers carry heavy loads and allows stroke victims to regain mobility, and is an expert in developing mobility-enhancing technologies that are comfortable to wear (often a challenge) and powerful.

Panagiotis Polygerinos, an engineer at Wyss and author of a number of papers on these types of devices, built the first benchtop prototype, putting together the technology that would hold the customisable actuators to the hand. But it wasn’t long before the team realised that to really get to grips with the potential of the hardware, and to understand how to improve its general functionality and customisability, they had to go to the patients that would be using it. The designers put together a group of participants for tests – patients suffering recruiting strokes, spinal-cord injuries, muscular dystrophy and ALS – to try it out.

"We really wanted to get their feedback on the design," says Galloway, when asked why this stage was so essential. "We wanted to find out, ‘do you want this?’. You know, is the range of motions good enough?"

Just fitting the glove to the hand proved a challenge in giving patients a comfortable experience that best directed forces towards bending their fingers, as well as finding the right textiles. A key question was how to anchor the glove to the hand so it felt comfortable, didn’t become hot and sweaty, and still carried out the complex mechanical tasks required of it. "So we use breathable materials, and try to create a glove that is easy to put on and take off," explains Galloway. "This allows the hand to breathe and still anchors the actuators to it."

"Basically, we mould silicon tubes or balloons, and add specially patterned reinforcements with Kevlar fibres and other inextensible sheets that cause them to take particular shapes when inflated," adds Walsh. "Normally, when we force air into the silicon tubes, they just expand equally in all directions. But adding the reinforcements allows us to mechanically program the actuators so it gives the desired motion and force when pressurised."

The other major task was developing how the customer would control the device. Focusing on patients with neuromuscular disorders, for whom motion is always difficult, coming up with control schemes that could detect user intent was complex, and it’s an aspect of the technology that’s still under discussion. But Wyss is pursuing a range of options, including the use of EMG sensors that detect and anticipate muscle activity. "We’ve been playing with a whole bunch of different suite solutions to detect user intent," says Galloway.

The recognition of this fact allowed the technicians at Wyss to really get to grips with the lives of the end users, and the key challenge of the device became clearer as time went on: balancing the highly functional and complex technology with comfort and ease of use. Part of the approach at the institute is a ‘from bench to bedside’ philosophy: a holistic way to go beyond functionality by incorporating into the process the often-overlooked social and psychological factors of the design of a product like this.

"From the start of this project, we’ve focused on understanding the real-world challenges facing these patients by visiting their homes to perform research," Walsh explained when the success of the research was first announced in June 2015.

The growth of soft robotics

From the start of this project, we’ve focused on understanding the real-world challenges facing these patients by visiting their homes to perform research.

Of course, the teams at Wyss aren’t the only engineers developing these types of devices. In October, developers at MIT announced that they had built a three-fingered robotic hand with adaptive sensors, capable of identifying and holding objects. This design is not dissimilar to one developed by researchers at Carnegie Melon, too, both utilising soft robotics to mitigate the challenges that come with regulating grip in non-human hands.

Unlike other engineering departments, however, which are exploring this in the context of attaching hands to larger robots and artificial intelligence, the focus at Wyss is integrating technology into human biology. The glove must be comfortable, affordable and match the physicality of the wearer.

"We’re not trying to overpower the person," explains Walsh. "We’re trying to put a light, flexible actuator on them that, in this case, when it’s pressurised, has kind of a similar motion to what they are trying to do: it works naturally and synergistically with them."

This is why the device must be made of entirely soft materials. They make it easy to fit and adjust to the human hand, meaning it can be made as comfortable as possible for the wearer.

"Soft robotics is a rapidly growing subfield of robotics, and our application is an example of how the technology is useful for applications when robots need to intimately interact with people," Walsh says.

The main focus for the participant group was to find patients who enjoy general motor function but whose situations are, unfortunately, not set to improve in the future: those who can move their arms, but their hands are very weak. The glove isn’t meant for users to be applying huge forces to the hand; it’s intended to help patients with the day-to-day tasks that might currently limit their independence, such as picking up small objects or buttoning up a shirt.

"It’s not going to allow you to crush a beer can," says Galloway, "so for the moment it’s not for the worker on the factory floor lifting heavy objects, but for people who have really weak hand strength. The glove is able to provide enough force to open and close their hand, and to pick up some objects."

With the glove, it’s like having a hand back.

Of course, there’s a long way to go before we see these gloves on sake, and affordability remains a challenge. But what makes the Wyss Institute special is the emphasis on practicality and commercial viability: Walsh and his team are building technology with the view that one day, it will be accessible to the majority of the population.

"The whole mission of the Wyss Institute is to get technologies and bring them to market," says mechanical engineer Kevin Galloway. "What’s great about the Wyss is there are a lot of resources from business developers. The whole idea is to push the technology, put a lot of intellectual property around it and look for opportunities to commercialise it."

Walsh says that Wyss now has a proof-of-concept device that demonstrates the viability of the technology, but he concedes there’s a great deal of work that needs to be done before it’s robust enough for wider use.

"At the moment, we have an engineering team focused on refining the technology; we then hope to do a ten-patient pilot study within a year," he says. "If we’re successful, we’ll seek a commercial partner who will help take the device to market."

So, where does this leave the industry, more broadly? It’s still early days, but the ideas behind the project have major implications for at-home rehabilitation. Most of the devices on the market are prohibitively expensive – sometimes the cost of a car – and Wyss is working with materials that are comparatively cheap. If the technology becomes widespread, there are countless individuals whose lives would be profoundly transformed by the technology.

"It would be wonderful to be able to control my environment a little better, and my life a little better," a study participant says in a video on the Wyss’s website: an elderly woman suffering from muscular dystrophy who finds it impossible to pick up everyday items. "With the glove, it’s like having a hand back," she continues, smiling. "If anything, it feels good to have it on, it feels nice to have my fingers extended, but most of all it’s the function – to have strength in my hand again, it’s just wonderful."