Rising valuations caused M&As and asset transactions to fall in value by 75% in Q1 2011, reports GlobalData. 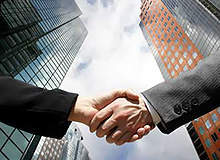 A definitive report, ‘Medical equipment quarterly deals analysis – M&A and investment trends, Q1 2011’, by industry analysis specialist GlobalData reveals that mergers and acquisitions (M&As) and asset transactions, which include change in ownership and control of companies or assets, reported a decrease of 75% in deal values in the first quarter (Q1) of 2011 due to rising valuations.

In Q1 2011, only two acquisition deals crossed the $1bn mark, one of which was Terumo’s announced acquisition of CaridianBCT from Gambro for $2.6bn, while the other was Forest Laboratories’ pending acquisition of Clinical Data for $1.2bn.

"Healthcare IT, in vitro diagnostics and cardiovascular devices were key markets for active buyers in Q1 2011, recording deals worth almost $2.8bn."

Debt offerings, including secondary offerings and private debt placements, recorded an increase in the number of deals and a marginal decrease in deal values in Q1 2011. The segment reported 31 deals worth $11.4bn in Q1 2011, compared with 30 deals worth $11.9bn in Q4 2010.

"By deal type, partnerships stood at the top with 36% of all deals."

In Q1 2011, start-up stage deals accounted for 58% of the total deals and dominated the VC market, followed by growth capital / expansion stage deals with a share of 29%.

New Enterprise Associates topped the list of venture financing firms by participating in nine deals with a total deal value of $169.3m during the last four quarters (Q2 2010–Q1 2011). "Venture capital investments may slow down further due to healthcare reforms in the US," says Vittal. "This may affect both start-up companies and capital/expansion stage deals."

North America reported a sharp decline in deal values in Q1 2011 due to the continued pressure of healthcare reforms enacted last year affecting US medical devices companies. The region reported deal values worth $20.5bn in Q1 2011, compared with $34.2bn in Q4 2010, reflecting a decrease of 40% in value. However, the total number of deals increased to 503 deals in Q1 2011 from 449 deals in Q4 2010.

"Asia Pacific will continue to see an increase in the number of deals as major medical device firms expand into the high growth markets of China and India," concludes Vittal.