Swedish start-up Flow developed a brain-stimulation headset and virtual therapist app in 2016, and now hopes to make it available on prescription in the UK 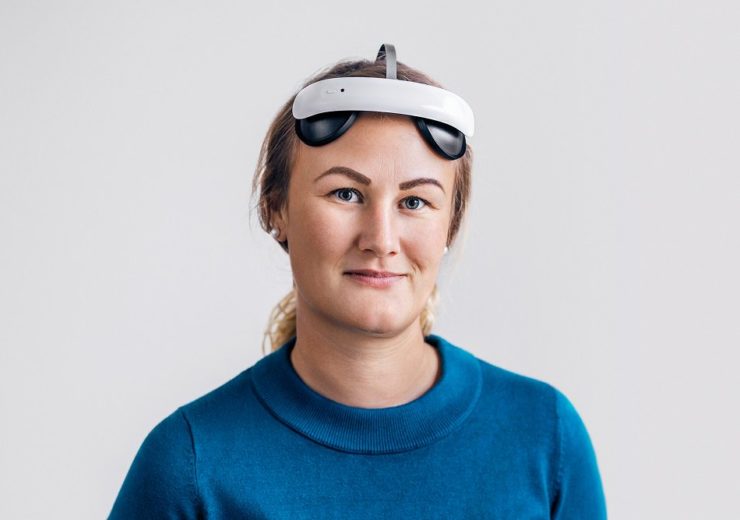 The Flow headset works by rebalancing neuron activity in the part of the frontal lobe that controls emotion (Credit: Flow neuroscience)

Brain-stimulation headsets could be the next big technology to help people recover from depression – and may one day even be available on prescription.

Swedish medtech start-up Flow has created a device that uses neurostimulation to redress imbalances in brain activity thought to cause a number of mental health problems.

It is available online for £399 ($488) but CEO and clinical psychologist Daniel Mansson says the company is working towards making it available on prescription, initially through the UK’s NHS.

Alongside the headset, Flow has created an AI-powered smartphone app that uses interactive behavioural therapy sessions to treat depression.

Mansson said: “The combination of the headset and app offers a powerful treatment option compared to other types of treatments, and empowers users suffering from depression.

“Our mission is to make treatment for depression available to as many people as possible.

“The next step is to provide it through prescription and have it reimbursed by the public health system, such as the NHS in the UK, and different countries where Flow is available.

“This means that a healthcare professional – often a doctor – takes the decision if the patient needs the device.

“This last step is important as it enables a group of people who may not have the financial resources to buy the device.”

How does brain-stimulation help treat depression?

The battery-powered device uses a non-invasive form of neurostimulation – this means the electrodes used do not need to be inserted into the brain, as is the case in invasive deep-brain stimulation.

Instead, when the user places Flow’s device on their head, it delivers a low, constant electric current to the part of the brain’s frontal lobe that controls emotional expression.

This nudges the neurons closer to a desired activity, which helps to redress imbalances in brain activity that are thought to cause depression.

Mansson said: “The headset uses a tDCS brain-stimulation technique that has been studied for 20 years and shown in various double-blinded randomised controlled trials (RCTs) to reduce depression with approximately the same efficacy as the most-used antidepressant medication.

“The largest study to date, published in the New England Journal of Medicine, shows that 41% of patients reduce their depression by at least 50%.”

On its website, Flow says: “Most users notice a reduction of their symptoms after about three to four weeks. Some people notice a change after only one day.”

Flow also believes the neurostimulation offered by the headset has fewer and less severe side effects than antidepressant drugs, while remaining just as effective in curing depression.

The benefits of using Flow’s app alongside the neurostimulation headset

This purely-scientific approach to depression treatment is combined with behavioural therapy through Flow’s virtual therapist app.

The app’s AI-powered chatbot gives users the most basic information they need in order to understand depression and teaches that sleep, nutrition, exercise and meditation are the key pillars in treating the mental health disorder.

It also enables users to talk about how they’re feeling and learn self-help techniques for dealing with depression through daily conversations with the AI therapist, and by completing exercises.

The headset is designed to be used alongside the app in a total of 18 stimulation sessions for self-help techniques, each lasting 30 minutes, over the course of six weeks.

Mansson believes the combination of the app and headset maximises chances of recovery from depression, claiming it is Europe’s first and only medically-approved, at-home treatment of its kind.

He said: “The headset and app have been improved during a long development process. The coming versions of the app will improve content by making it more personalised.

“We will also be working with more clinics to incorporate Flow into their existing treatment programs.

“Right now, we are at a very good level – the app includes all the things you need in order to reduce depression.”

Could the brain-stimulation headset soon be available on prescription in the UK?

Flow, set up in 2016, is now bidding to get the brain-stimulation headset available on prescription via the NHS.

It believes this would take the company a step closer to its goal of making depression treatment “simple and accessible for everyone, anytime, anywhere”.

Mansson said the application process has already begun but is at least a year away from approval.

After receiving a CE marking, indicating conformity with health, safety, and environmental protection standards for products within the European economic area (EEA), new medical devices are reviewed by the UK National Institute for Health and Care Excellence (NICE).

NICE appraises the interventions that impact health, government policies and NHS resources, and then issues national guidance for care.

Having received approval by NICE the product can then be listed in the British National Formulary (BNF), after which local clinical commissioning groups (CCGs) can grant access to the product in their region.

Once the CCG has approved it, the treatment is reimbursed based on the diagnosis of the patient and whether a doctor thinks it’s the appropriate treatment for the patient.

Mansson said: “Flow is a CE-certified treatment for depression in the European Union and the review process by NICE will start in early 2020.”

Flow also plans to work with the US Food and Drug Administration (FDA) to gain clearance to bring its at-home depression treatment to the US after receiving a $1.5m funding round led by Khosla Ventures earlier this year.

Mansson said: “We will continue to have a strong focus on brain-stimulation as a basis for treating other types of conditions such as PTSD, pain and potentially OCD.

“But, right now, our full focus is on depression.”