MEDI FUTURES, a biomedical ultrasound company and a member company of the Born2Global Centre, signed an MOU for clinical research and R&D with Soonchunhyang University Hospital Bucheon (SUHB)'s Department of Plastic Surgery and Slim Medi Center. 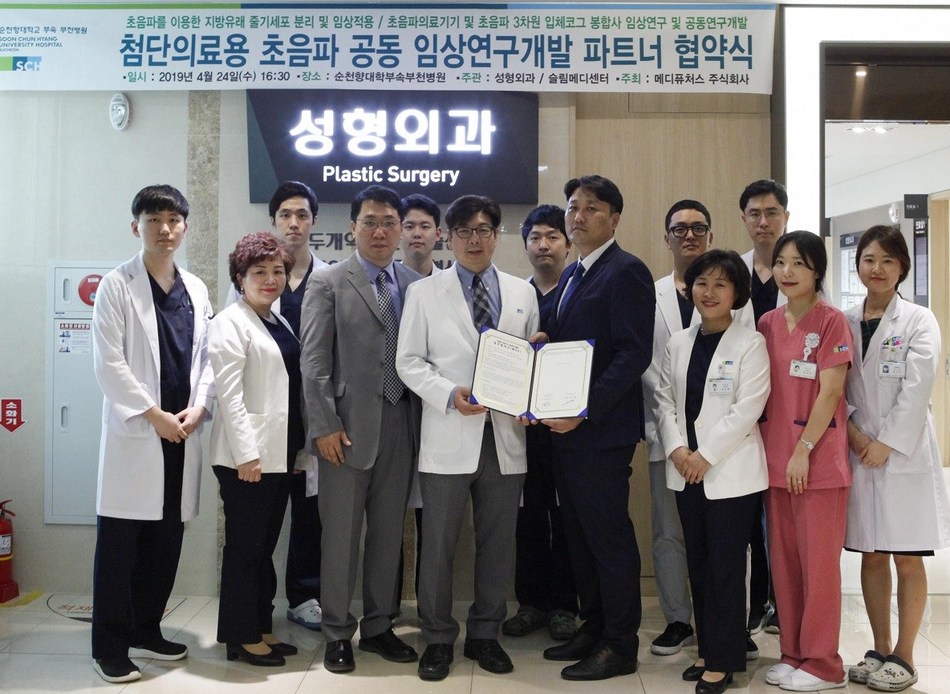 The MOU supports clinical research and joint R&D in two major areas: 1) technology that extracts adipose-derived stem cells (ADSC) using ultrasound technology MEDI FUTURES’ independently-developed and without collagenase (an enzyme that breaks down peptide bonds in collagen); and 2) a medical 3D suture that utilizes ultrasound and for which a patent application has already been submitted.

SUHB is the only official “high-grade” hospital in western Gyeonggi-do. Since its establishment in 2001, SUHB has received the highest possible score for three consecutive years by the Health Insurance Review & Assessment Service for its appropriate treatment of four different cancer types.

SUHB has also received the highest grade in an assessment of emergency medical institutions conducted by the Ministry of Health and Welfare and is considered a specialized institution for patients with serious illnesses.

Park said, “MEDI FUTURES is a company that successfully developed adipose derived stem cell separation technology, which utilizes ultrasound technology as well as top-quality medical sutures. We have high expectations for MEDI FUTURES’ expansion into not only surgery but also regenerative medicine.”

A spokesperson for SUHB’s Slim Medi Center said, “The ultrasound bone surgical device, developed by MEDI FUTURES to minimize neural and muscular damage, and the company’s non-invasive medical devices, such as the adipose melting device, will be able to contribute to the safe and quick recovery of patients who receive surgical treatment at the Slim Medi Center.”

Since founding the International Healthcare Center in 2013, SUHB has attracted an average of 10,000 foreign patients each year, with an accumulated total of over 50,000 patients from outside Korea. As such, SUHB is gaining a reputation as a global medical institution.

SUHB has also already performed over 600 robot surgeries on cancer patients in the shortest time. SUHB was also the first hospital in Korea and the second hospital in Asia to introduce table motion technology, a cutting-edge surgical table system. These are just some of the ways in which SUHB has established itself as a major proponent of advanced medical technologies.

MEDI FUTURES President Ji-hwan Kim said, “Based on the growth seen in the bioindustry’s stem cell market in 2018, the stem cell market, which was worth approximately USD 1.4 billion in 2017, is expected to increase by an annual average of 16.5% to reach USD 3.4 billion by 2023.