BioSig Technologies, a medical device company announced that it will be receiving 15 units of its PURE EP System from its manufacturer in preparation for the Company’s limited market release later this month. 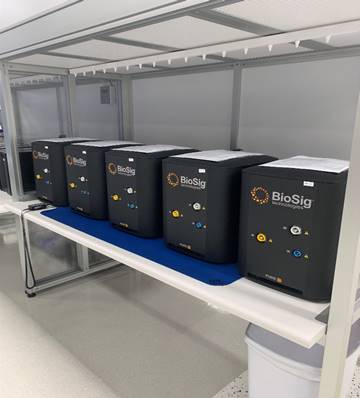 Image: The system is indicated for use under the supervision of licensed healthcare practitioners. Photo: Courtesy of BioSig Technologies, Inc.

BioSig recently added 3 hospitals, including two distinguished academic centers, to its list of medical institutions that have agreed to receive the device in 2019 to evaluate the PURE EP System. These new units, which are being provided at BioSig’s expense on a short term basis, will be used for a series of short- and long-term (up to 180 days) external evaluation studies, which form an essential part of a targeted commercial launch.

Currently, management is engaged with other facilities throughout the country. These initial shipments are part of the Company’s stated plans following the recent successful completion of initial clinical cases at the Texas Cardiac Arrhythmia Institute in Austin, TX, Greenville Memorial Hospital in Greenville, SC and Indiana University School of Medicine.

“We are extremely pleased to be on track and schedule with the initial installments of our technology, as we move into the commercialization phase of our strategic business model,” stated Mr. Kenneth L. Londoner, Founder, Chairman and CEO of BioSig Technologies, Inc. “The feedback from hospitals, clinics and physicians has been very encouraging.  We have been actively adding to our clinical, commercial, engineering and operational teams in anticipation of the expansion of working with leading medical centers in the U.S. We look forward to initiating commercialization as we establish ourselves as a market innovator in the medical technology sector.”

PURE EP System is an FDA approved proprietary signal acquisition and processing technology. The device is a computerized system intended for acquiring, digitizing, amplifying, filtering, measuring and calculating, displaying, recording and storing of electrocardiographic and intracardiac signals for patients undergoing electrophysiology (EP) procedures in an EP laboratory. The device aims to minimize noise and artifacts and acquire high-fidelity cardiac signals. Improving fidelity of acquired cardiac signals may potentially increase the diagnostic value of these signals, thereby possibly improving accuracy and efficiency of the EP studies and related procedures.

BioSig recently announced that it has been added to the Russell 3000 Index and was allowed 33 patent claims covering its PURE EP System.