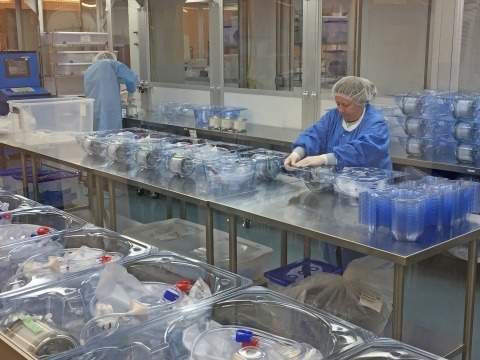 In the US, nearly thirty hospitals have been brought online for ALung’s VENT-AVOID Trial of the Hemolung Respiratory Assist System (RAS), a key milestone in advance of the winter cold and flu season when acute exacerbations of chronic obstruction pulmonary disease (AE-COPD) increase nearly two-fold.

In the United Kingdom, the REST Trial, a landmark pivotal study of the Hemolung RAS in patients with acute respiratory distress syndrome (ARDS), enrolled its 300th patient.

COPD affects 30 million Americansand is the third leading cause of death in the United States behind cancer and heart disease.

Acute exacerbations, defined as a sudden worsening of COPD symptoms, are a major cause of morbidity and mortality in COPD patients. The VENT-AVOID Trial is the world’s first pivotal study of extracorporeal carbon dioxide removal in the AE-COPD population.

The study aims to validate the safety and efficacy of the Hemolung RAS for COPD patients experiencing acute exacerbations requiring ventilatory support.

ALung chairman and CEO Peter DeComo said: “During the winter months, COPD patients tend to suffer more exacerbations due to the circulation of respiratory viruses and the cold air.

“It was imperative that we had our study sites online and ready to enroll patients in advance of the season. We are excited to now have nearly thirty prestigious academic medical centers screening patients for the study.”

In the United Kingdom, significant progress continues to be made enrolling patients in the REST Trial. This landmark pivotal study of the Hemolung RAS in patients with acute respiratory distress syndrome was already the largest ever prospective clinical study of extracorporeal lung support.

Study enrollment in 2018 has increased by more than 50% over 2017, and three hundred patients have now been recruited. ALung’s Hemolung RAS is the exclusive ECCO2R technology being used in the trial.

The research is jointly led by Queen’s University and Belfast Health and Social Services Trust under the direction of investigators Professor Danny McAuley and Dr. James McNamee of the Centre for Experimental Medicine at Queen’s University Belfast.

The Hemolung RAS has European marketing clearance (CE Mark) and is the world’s only fully integrated Respiratory Dialysis system. Approximately 900 patients have been treated with the technology worldwide.

ALung is the only company pursuing two major pivotal trials to validate the safety and efficacy of extracorporeal carbon dioxide removal therapy.