This year, Medical Device Development’s quarterly dinner discussion was held at the Radisson Blu Hotel in Galway. President of Biocoat Keith Edwards and senior research fellow at the University of Limerick Dr Mark Southern respectively gave presentations on what considerations should be made in selecting hydrophilic coverings for medical devices and the work of the Enterprise Research Centre to enhance the operations of OEMs across Ireland. 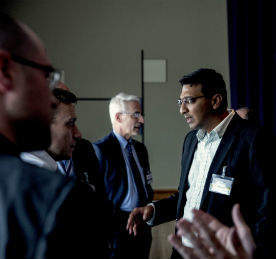 On the evening of 4 June 2015, delegates from companies including Boston Scientific, Medtronic and Telefex gathered at the Radisson Blu Hotel in Galway for a three-course dinner, and a discussion on innovations in coatings science and the work of the Enterprise Research Centre (ERC) with OEMs across the Republic of Ireland. Leading the night’s first discussion was Keith Edwards, president of the US-based coatings producer Biocoat. For almost a quarter of a century, the company has provided coating solutions for use in cardiovascular, neurovascular and peripheral vascular medicine.

Biocoat specialises in the production of hydrophilic coatings that incorporate hyaluronic acid (HA). Unlike coatings based on polyvinylpyrrolidone that can experience a fall in lubricity during especially challenging procedures, an HA-based coating will remain wet throughout, thanks to its hydrogel behaviour and low dehydration rate. Biocoat has applied this formula to devices ranging from catheters and guide wires to stent delivery systems and clot-retrieval wires.

The company liaises extensively with its customer base to ensure that its coatings comply with existing US FDA requirements, which include proving the presence of the coating, its application in a uniform fashion, its usability under stress, and the presence and number of dropouts.

"If you don’t have the answers to this, your coating supplier should," said Edwards at the event. "We help our customers answer these questions either directly with FDA or through our extensive in-house testing procedures."

The tests Biocoat conducts for this purpose also examine a variety of factors that could affect the inherent reliability of the coating. "We look for unreactive monitors, phosphatisers, and the effect of humidity and sterilisation methods," said Edwards. "All of these are major factors in determining if a coating remains appropriate for your device."

In this respect, ensuring a strong connection between the base coat and the substrate remains vital. "Delamination is nearly eliminated if that mechanical adhesion is optimal," explained Edwards. "Our technology is a bilaminar coating platform that is covalently bonded and based on HA, a biocompatible polysaccharide that upon hydration is flexible and easily variable, and will remain slick for long periods of time.

The production process in which this effect is achieved is rigorous. "After dip coating, we will cure it for up to two hours, before going right to quality control and packaging," said Patel. "The process on one cycle typically takes up to two and a half hours in total, but what you’ll get out of that are up to 200 fully coated devices. This process can be scaled up by orders of magnitude based on the size of your oven."

After the coating process has been completed, Biocoat conducts in-house pinch testing with delrin or silicon pads.

"We do this to make sure that the coating retains a very low coefficient friction, or gram force," Edwards explained. "To test this, we apply a load on the coating of around 470g every 30 cycles or so. We like to be really rough in our pinch testing because we’re so hard on our coatings. And if you want your coating tested up to 100 cycles, we’ll do that for you."

This regime keeps the level of particulates in Biocoat’s hydrophilic coatings well below the limit mandated by the FDA.

At BioCoat, we have a good-sized R&D team that is always focused on cost-reduction initiatives or looking at the characterisation of coatings.

As the guests tucked into their main courses, Dr Mark Southern took to the stage to discuss the work of the ERC at the University of Limerick. As one of the largest applied-research groups in the country, Southern and his colleagues are responsible for rationalising the operational and manufacturing processes of some of the most cutting-edge technology firms in Ireland today.

Southern explained that the work of the ERC revolves less around streamlining supply chains than attacking specific engineering problems in the given devices created by manufacturing processes. This is accomplished by linking clients with appropriate contacts within their industries, or in some cases calling on the testing resources of the Irish academic community at large to devise new solutions. Testament to the success of this approach is the number of engineering innovation competitions the ERC has been shortlisted for or won, including the Engineers Ireland Award in 2011. Its receipt of the Research2Business Award in 2014 has also considerably enhanced its reputation.

"We use a process called variation mode and effect analysis, which is really a ranking exercise to find out what the current state of knowledge is within the organisation," explained Southern. "We also use statistical experimentation and finite element analysis simulation modelling, as well as on-site experimentation."

Southern cited his collaboration with Shannon MicroCoil as a prime example of how this model can radically transform even a small SME’s production processes. Having predominantly been involved in the manufacture of roof tiles, the company approached Southern and asked him to help with the practical transition to making medical guide wires, having already acquired a wealth of experience producing wire forms and springs for the construction industry.

"When we initially observed the processes, it took three weeks to make a working prototype of the product on the assembly line," said Southern. "They knew absolutely everything from an engineering perspective of how those machines worked, but post-project, we could make prototypes within three hours. In fact, within 18 months of us demonstrating what we could do, the company that manufactured the machines on the assembly line wanted to help us design the second-generation versions."

Southern was clear about what his team could fundamentally accomplish for medical OEMs across Ireland. "The real issue is that we provide a multidisciplinary perspective, where your company can have the right people focused on the problem rather than their own personal achievements," he said. "That’s why we’re successful at what we do."

As the guests moved on to dessert, Edwards approached the podium once more to discuss the economics behind the purchase of a medical device coating. At a basic level, he said, the cost of a medical-grade coating is dependent on the complexity of the intended application: urinary catheters, for example, are usually cheaper than cardiovascular or neurovascular devices.

Edwards advised that it is widespread practice within the coatings sector to charge a variety of miscellaneous expenses, including royalties, quarterly minimums and licence fees, and that customers would be wise to ensure they only pay once for the coating they ultimately choose.

"At Biocoat, we have a good-sized R&D team that is always focused on cost-reduction initiatives or looking at the characterisation of coatings," he said. Edwards talked the audience through a number of the substrate studies Biocoat had been conducting in recent months, revealing the diversity of coatings that remain adaptable to a range of different medical device applications.

With that, Biocoat’s president concluded proceedings for the evening. One final surprise lay in front of the attendees in the form of a 3cm-long translucent plastic rod: "Just add a little bit of water, and you can observe for yourself the persistent lubricity of the coating," said Edwards. Months after repeatedly testing this hypothesis in tea, its persistence is still in effect.